A long time ago (about two generations back) I walked past a florist store that was going out of business and saw a peacock display for sale in the front window.  I was in love with this peacock.  I wanted that peacock.  I scrimped for two weeks to get fifteen dollars saved up to buy him,  I was so proud of this peacock until I realized that I had used money that should have been going towards a car so I would not have to take a bus to work.  My happiness disappeared and turned to shame and embarrassment. I knew my father would think I was more than just frivolous,  he would think I was stupid to be buying a peacock when I needed a car. I ended up hiding the peacock in the attic,  and later he ended up at a rummage sale without me ever getting to really enjoy having him.  I just could not bear to look at him and remember how misguided my priorities were when I bought him.  But now I have a car,  a home, and all of the usual stuff that anyone could ever need.  I can buy myself a frivolous thing now and again,  and I do.  Witness my new love,  peacock plates and all the trimmings for a Paradise tablescape. 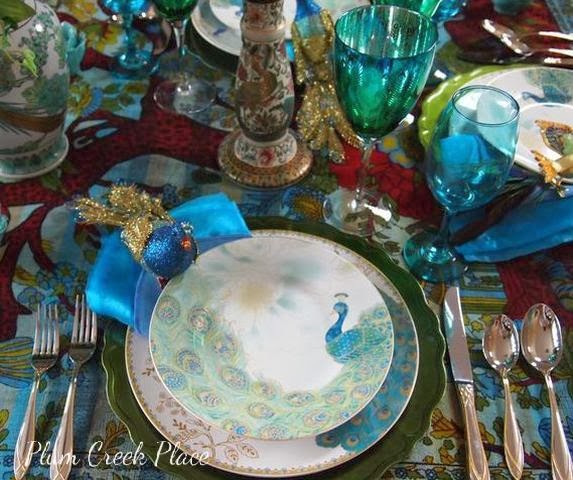 I came across the dinner plates made by 222 at the Home Goods store a year or two ago (apparently the pattern was being updated).  They had been marked down from $16.99 to twelve dollars for four plates.  A second box with three plates had been marked down to eight dollars.  Recently I found salad plates to go with the dinner plates (both are made by 222). 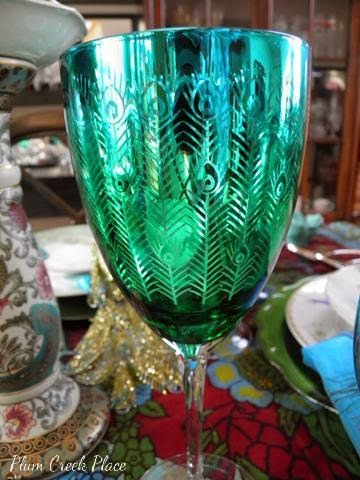 After Christmas I found a set of marked down turquoise water goblets made with a mirror like finish that resembles peacock feathers.  I paired them up with aqua wine glasses that I had bought from Marc's (my favorite close-out store) for a dollar each. 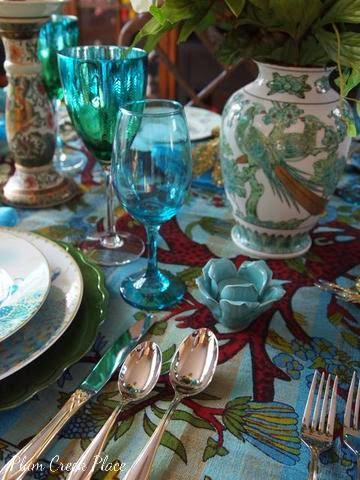 Last fall I bought a vase and two candle holders at the Volunteers of America store at 75% off the marked prices.  The vase had been marked at $4.99 (= $1.25 net), and the vases had been marked at $6.99 (= $1.75 net)each (the original price stickers on the candle holders said Stein Mart and were marked at $29.99 each).
I found this exotic tablecloth at Goodwill for $2.00 (less 10% senior discount = $1.80) it was made in India by a company called Trendz.  It is very colorful with birds and jungle animals on and surrounding a rendition of the tree of life.  I used the vivid blues in this tablecloth as the inspiration for the rest of my paradise tablescape. 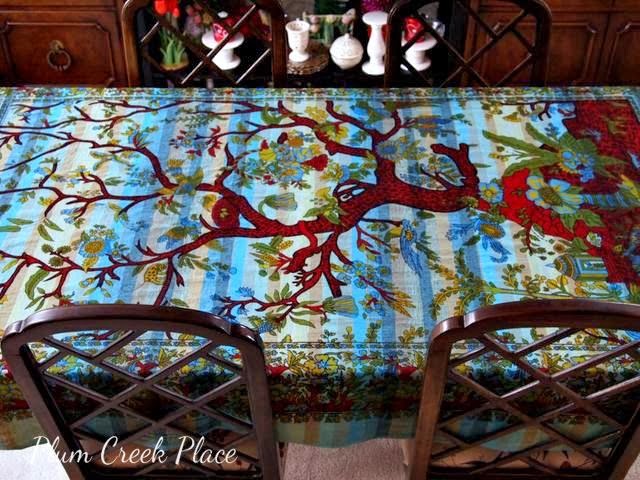 The peacocks on the napkins came from Home Goods after Christmas and the Humming birds were bought at a garage sale last summer for twenty-five cents each. 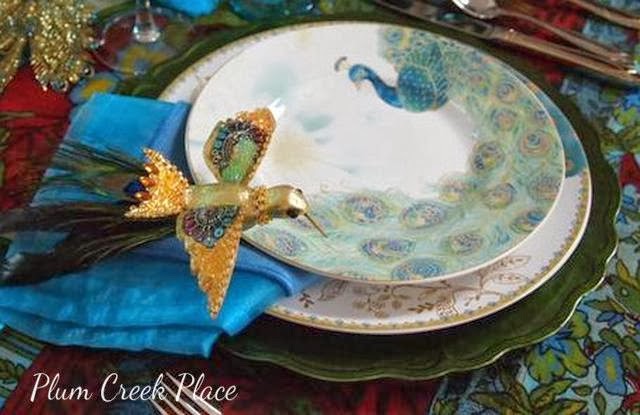 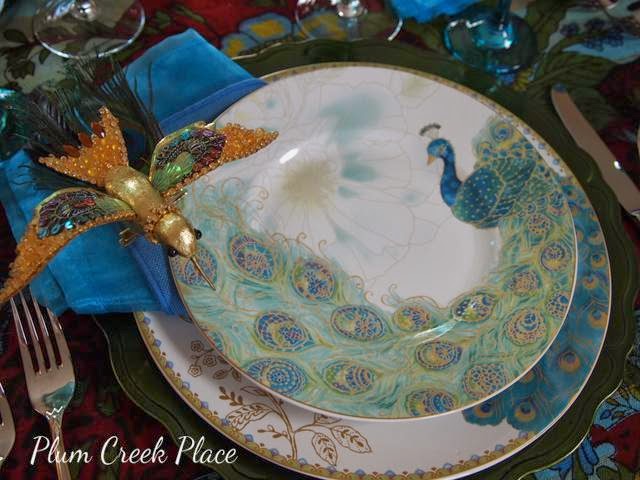 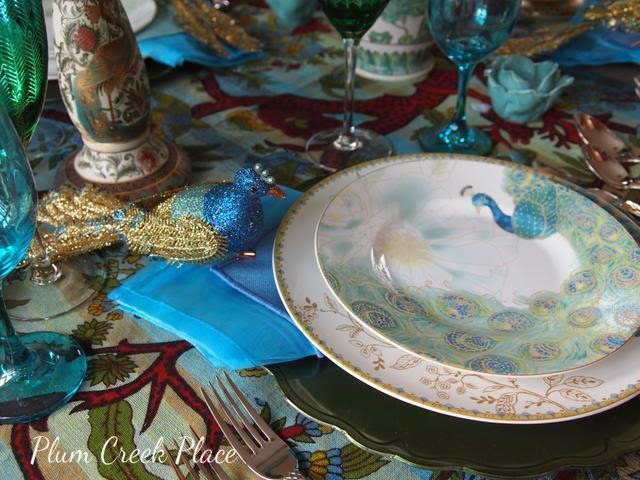 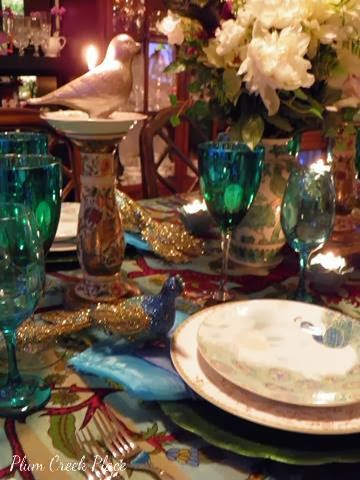 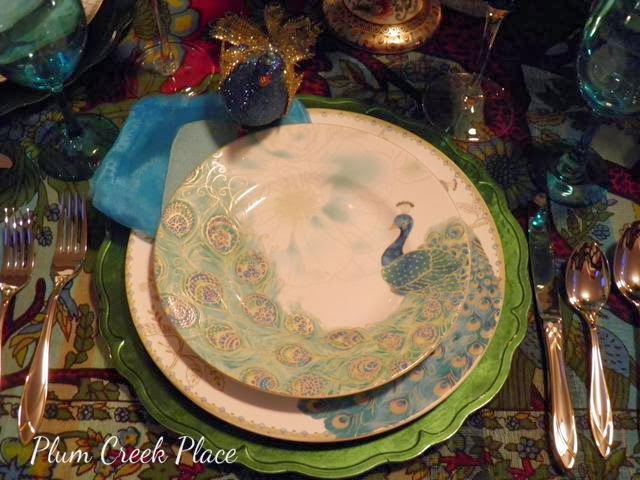 Now you might ask if I ever saved enough money to buy my "first car".  And of course I did.  A young man in the neighborhood had received his orders to ship over to Vietnam and wanted to sell his car. I bought his 1960 white Corvette convertible for six hundred dollars.  I loved that car even more than I ever loved that peacock! 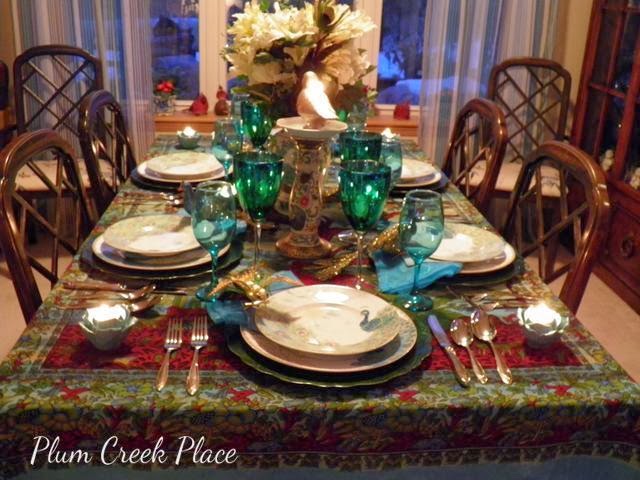 Have a wonderful week - Thrift on ladies, thrift on.

Kathe's You're Gonna Love It Tuesday

Karin's Twirl and Take a Bow

The Scoop - Visiting from Debbie's Confessions of a Plate Addict