Playing in the Fairy Garden

My goodness how time flies,  here it is nearly the end of June and the Fairy Garden is finally about ready for the Summer.  The twin fairies are happily seated beneath the China Doll tree an a pretty pink bench.  The fairies take turns sitting on this bench.  It seems to be their favorite spot in the garden (I think they feel secluded and safe there).  There is another bench in the fairy park but the fairy babies have claimed it as their own,  they like to watch the cerulean blue water as it bubbles down the creek and the babies just adore the frog pond in the park too!  The China Doll plant (that looks like a tree) was dug up late last fall and brought in for the winter.  It did very well in the Eastern facing  window in the dining room .  At the end of February I pruned all of the new growth back and took cuttings for a half a dozen new trees.  At the first of April  I started lightly fertilizing to encourage new bushy growth.  I pinched off the tiny new branches that started to grow around the base of the plant. 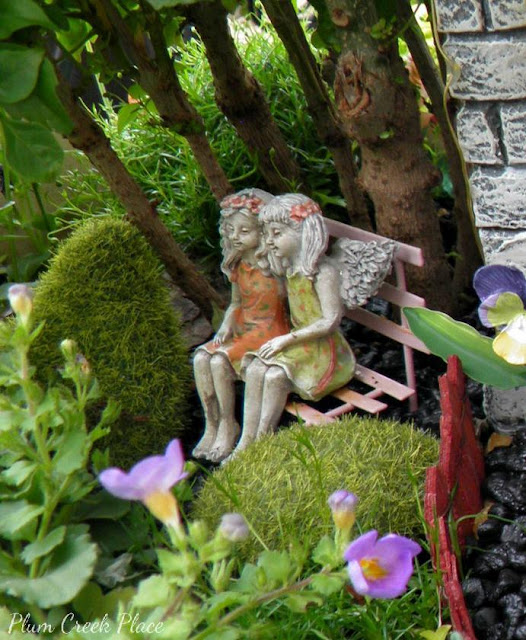 When I designing the Fairy garden last summer I played with the placement of the castle and the plants until I was happy with the layout. 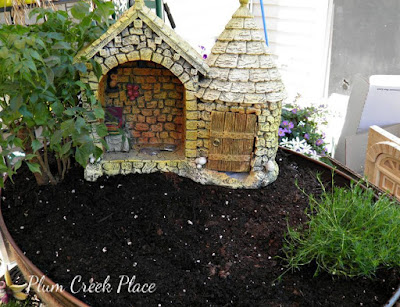 The fences and the rest of the plants were added after the major components were in place. Last but not least I added the fairies.  I spent days playing with them until I was happy with the overall effect.
Several baskets of flowers were placed on the table that the fairy garden was on and onto the table behind the fairy garden. This year I created several new fairy garden settings from old planters from last Summer (I reused the soil too). You probably have a bunch of old planters laying around too.

From this,
To this. 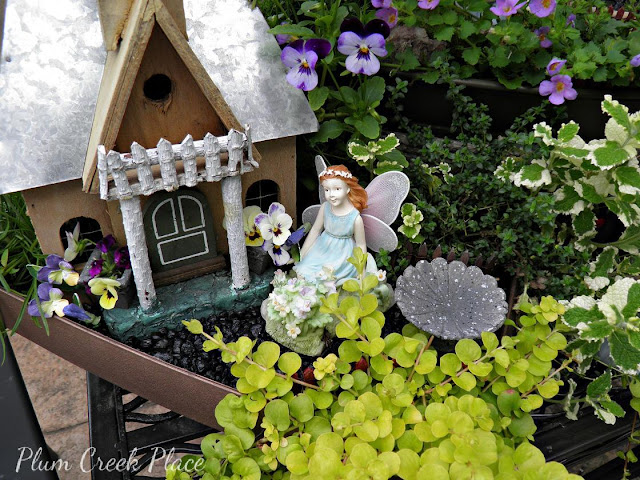 An old bird house,  a fairy,  some creeping Jenny,  mini herb pants, one pop-up viola, and a mini bird bath.  Plus a welcome gnome in the back. 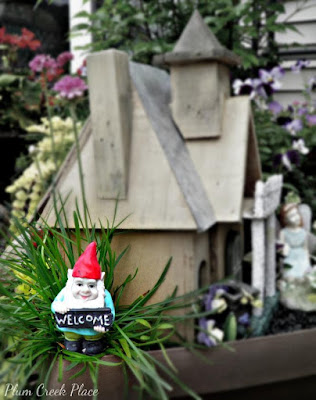 The best part of this post was getting to play with the fairies so I could take "just the right" pictures. 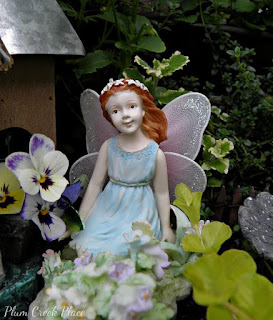 This fairy garden planter is to the left of the main Fairy Garden. 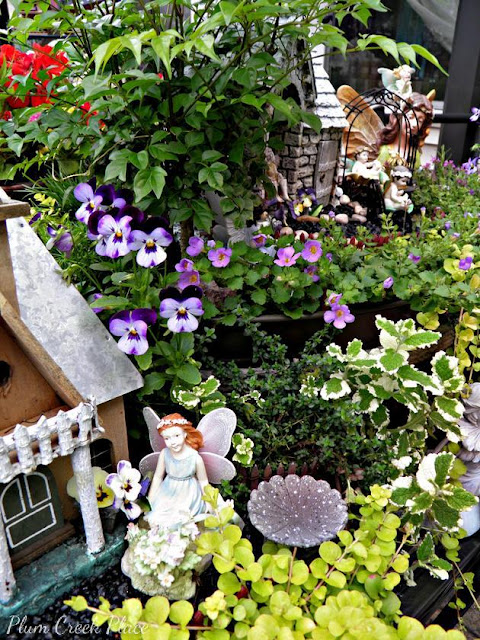 The second planter was used to create a park setting complete with a frog pond and a creek for the fairies. As I mentioned before, the baby fairies took over the park bench. 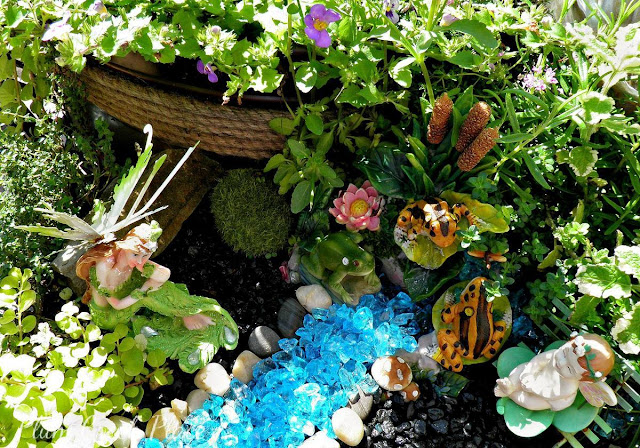 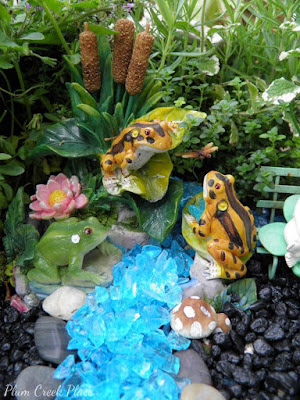 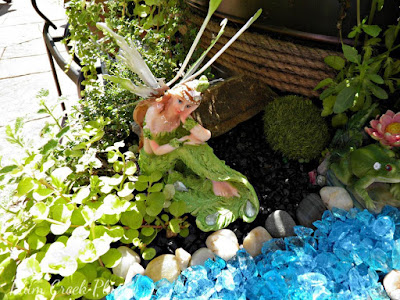 The green fairy looks bored with babysitting the infant fairy. 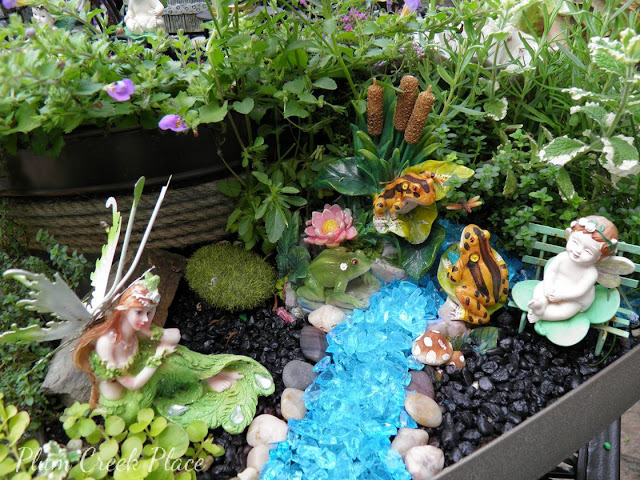 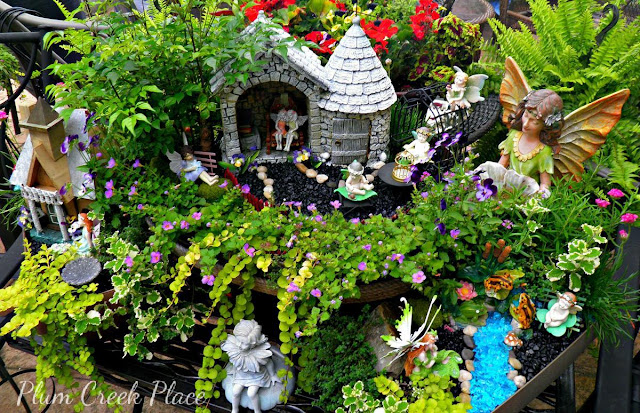 The main Fairy Garden planter has black fish tank gravel added this year,  but other than that,  it is pretty much the same.  The babies have a parrot in their bird cage this year.  See the mini thyme plants peaking out from under and behind the table.... they have the cutest little pink flowers. 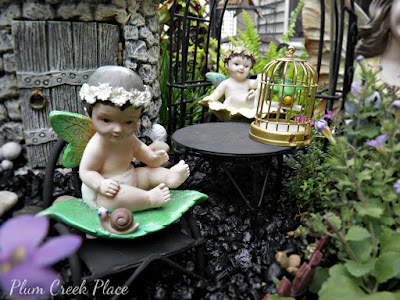 Yes,  the fairies have traded places again. The blue winter fairy is enjoying popping her toes up in the sunshine.  Not to long ago she was out getting frostbite on those little toes. 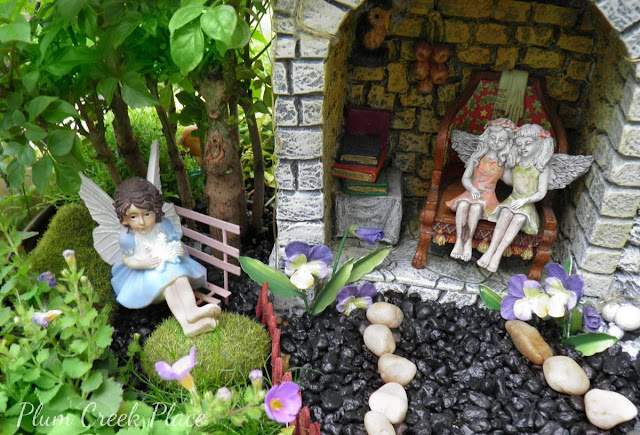 Brrr.... it was a very long cold winter.  It has only been a few weeks since our last frost here in the North Coast of Ohio.
The back of the Fairy Garden. 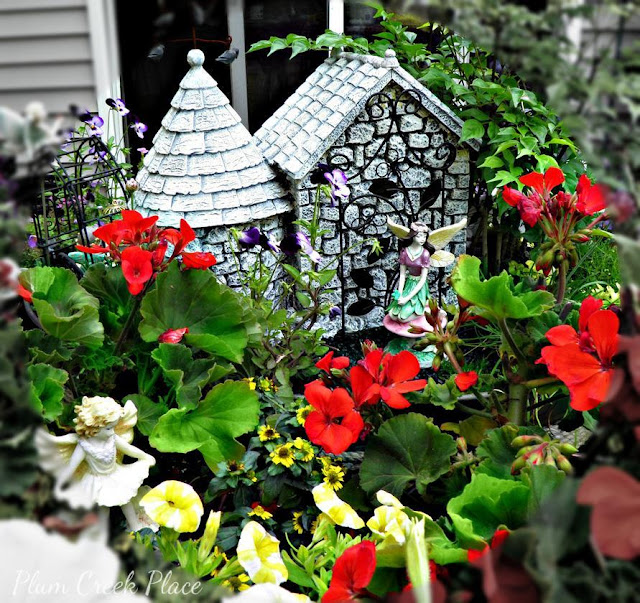 The purple fairy looks elegant in her garden setting. 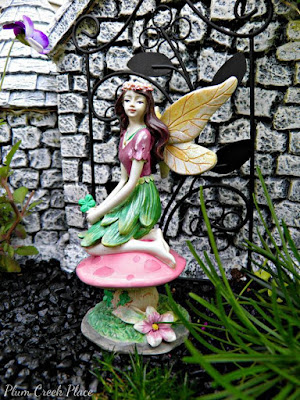 A pretty little pale yellow fairy dances in a flower basket behind the castle. 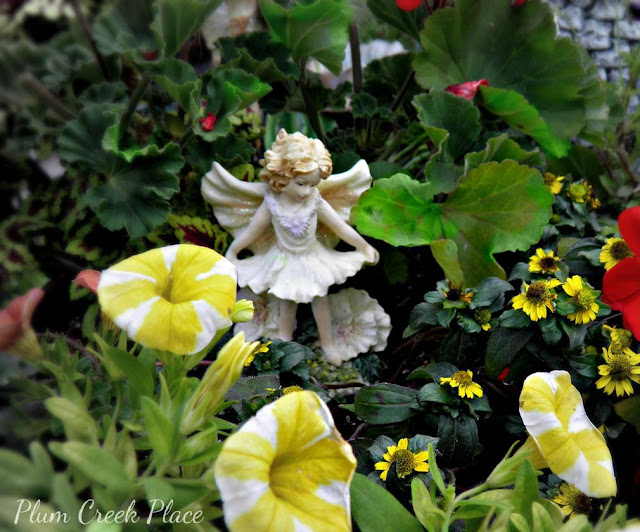 The two little garden fairies in the basket below have been out picking flowers for their dinner table tonight. 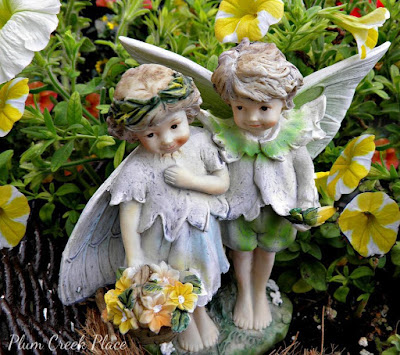 There are two other Fairy planters that are sitting on another iron table next to the patio door.  Both were created from thrift store buys. 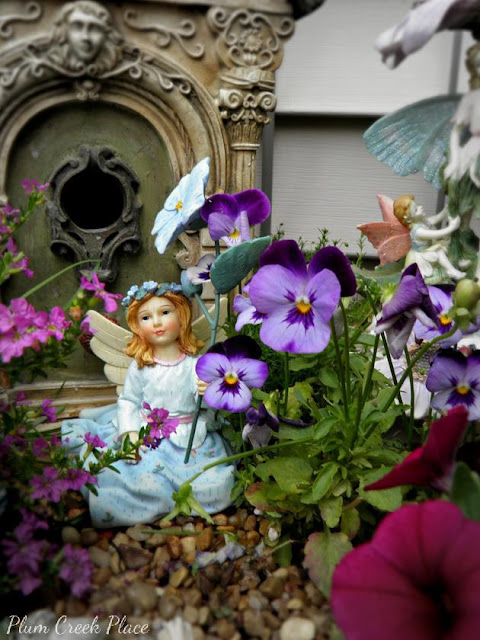 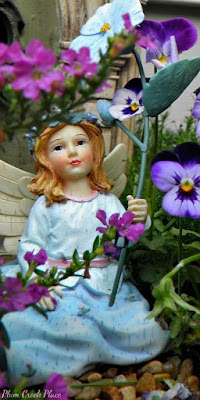 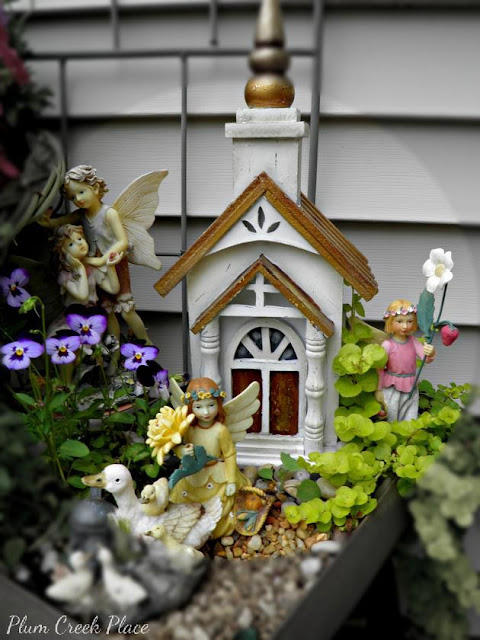 I am working on two more Fairy Garden Planters,  with a little luck it may stop raining within the next day or two so I can get back to working on my fairy garden.

The Korean Lilac bush in the front yard bloomed profusely this year.  Last year and the year before that late frosts blackened most of the buds.  This year we were home to cover them for the last frost,  a couple of days later it was in full bloom. 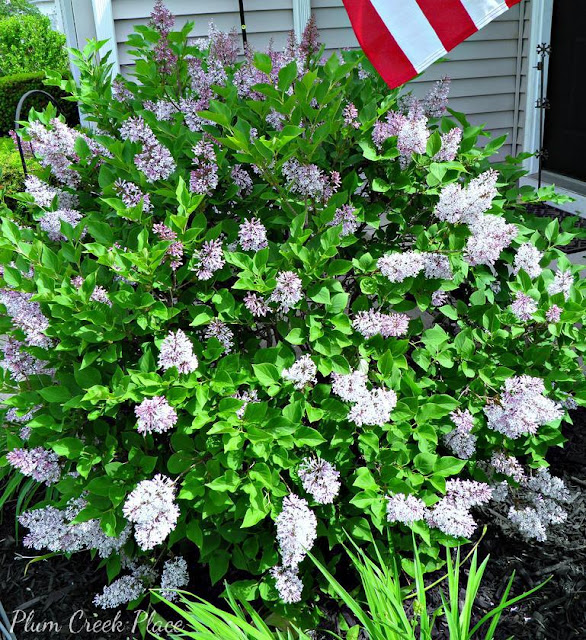 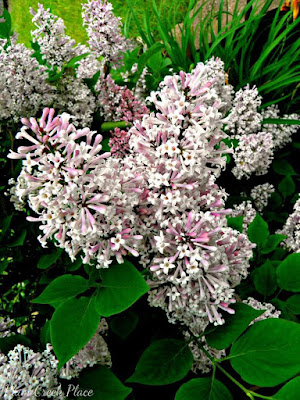 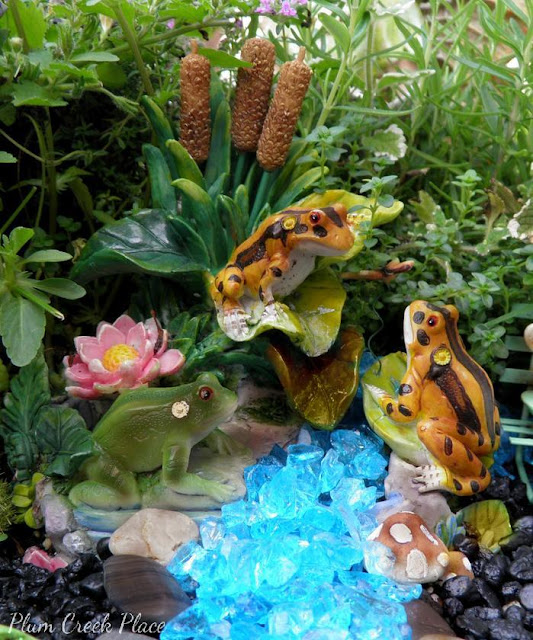 I hope to be posting my first Summer tablescape for this year within the next week or so.  Until then,  remember to thrift on ladies, thrift on.

Tuesdays At Our Home


Sunday's Down Under Linky Party