Darn that Pinterest!  I have spent hour after hour looking at pins of wonderful inspirational coastal ideas.  I was so inspired by pictures of giant clam shell candle holders from Pottery Barn that I had to try to make a copycat giant clam shell like theirs.  Jenna at The Painted Apron created a wonderful coastal setting using a a large Pottery Barn clam shell that I just adore.  Pottery Barn also offered an organic and rustic looking clam shell more recently that I kind of liked too.  There were others that I found on Pinterest but these two were the most inspiring giant clam shell pins for me.  I tried to combine a bit of the character from each of these lovely large clam shells and came up with THIS...... 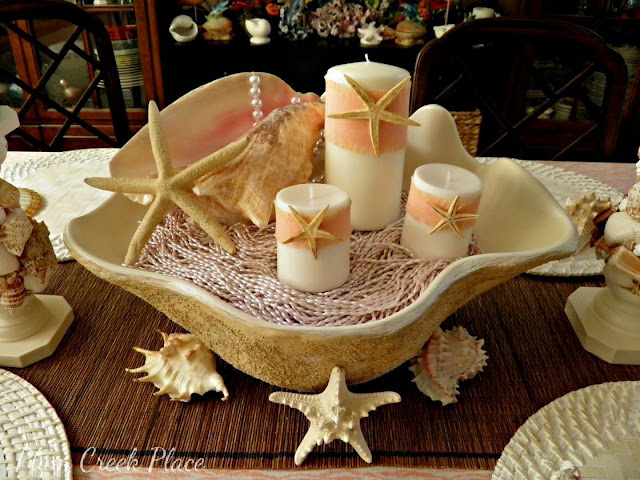 A little bit rough and a little bit sleek,  a combination of the inspirational photos that I found while looking for Coastal "By The Sea" pins.
You can see the details about this PB clam shell here - http://www.potterybarn.com/products/giant-clam-shell/  Notice the rough and coarse finish on this PB shell.

I started with a clear plastic (acrylic?) clam shell bowl.  Amazon has a similar bowl like this in white available here at Amazon. 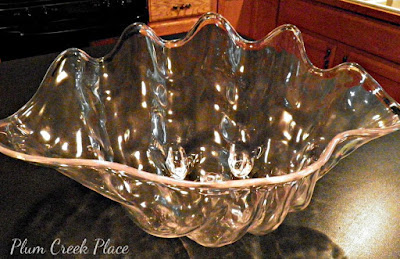 I found two large clam bowls and three smaller ones at a garage sale at a very reasonable price early in the summer.  When I saw them I grabbed them up right away for my future clam shell projects.  I took one of the large bowls and wrapped it very snugly in Christmas red Saran Wrap with the thought that I would be able to pop the plaster shell off of the clam shell form when I was finished applying plaster of Paris to it,  that did not happen (it was stuck tight). 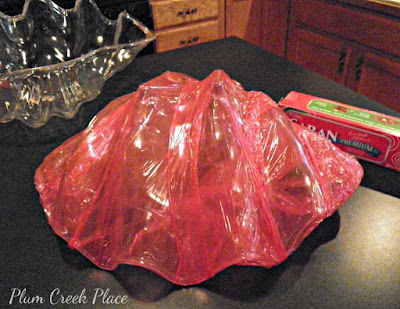 Once the shell was wrapped with the Saran I covered it with cheese cloth that was cut to size and trimmed at the edges so as not to hang over the lip of the bowl. 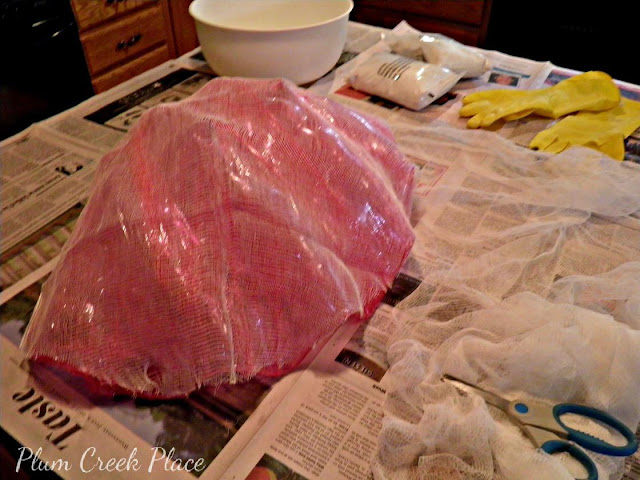 I mixed one of the four one pound bags with water per the package instructions that came in the All Purpose Plaster of Paris 4LB size that I had purchased at Walmart (I did not find the four pound size on Walmart's website when I looked for it today) and very quickly applied an even coat of the mixture over the cheesecloth covered bottom of the shell.  If you have good fresh POP it will be hardening within fifteen minutes or so.  One of the bags of plaster did not harden up for several hours,  a pretty good indication that the plaster was not fresh.  The very small print on the box said made in China.  Hmm.....  Maybe they slipped in some old stuff at the factory.  I was letting the plaster dry overnight between the coats anyway so there was no harm done. Between each coat of plaster I placed a layer of cheesecloth to add strength to the shell. 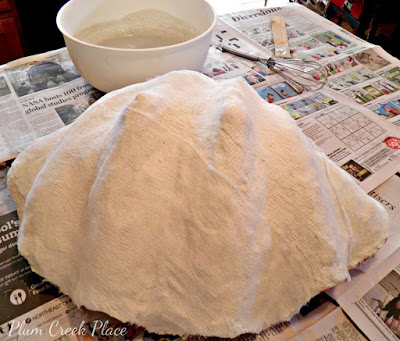 After the last of the four coats of plaster had dried overnight I trimmed out the red saran from the inside part of the bowl with a razor.  That left the plastic interior of the bowl with a good smooth edge transitioning to the plaster.  The plaster edge around the lip of the bowl was shaped first with an old paring knife and then I took the bowl outside to be sanded with fine sand paper for a smooth appearance. The inside of the bowl was spray painted with Rust-Oleum Paint Plus 2X ultra cover in satin finish Heirloom White to give a nice clean sleek appearance to the inside of the bowl like Jenna's inspirational clam shell bowl.  The exterior got two coats of Anita's all purpose acrylic Latte (11128) Craft Paint.  While the second coat of the Latte color paint was still wet I coated the paint heavily with fine gain sand from the craft store to give a coarser finish like the Pottery Barn inspiration bowl with the rough exterior. This is what it looked like after I knocked of the excess sand with a small wire brush and filled the interior with clean aquarium gravel. 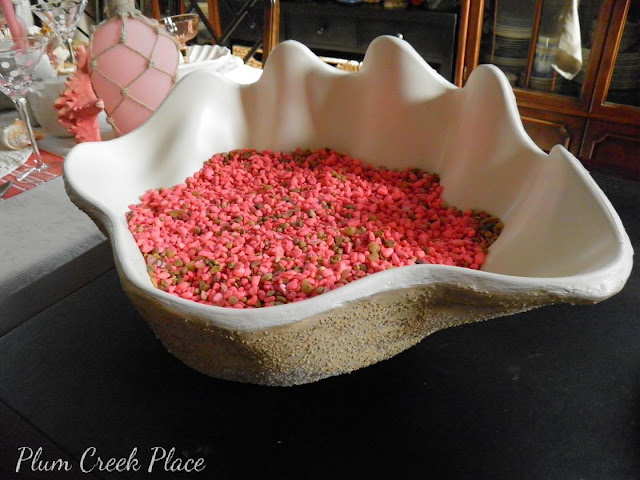 I added some coral color bead strands to the surface and then added the shells and candles that you saw in the first picture.. 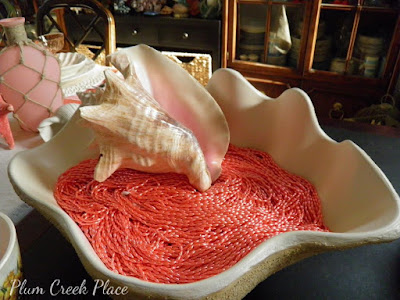 The following "Sunrise" tablescape pictures were actually taken before the pictures from my last tablescape.  I have been enamored with the color coral this summer and wanted to create a pretty white and coral tablescape.  Of course I used the clam shell centerpiece that I had made plus my lovely mermaid along with white rattan chargers from the clearance isle at HomeGoods for three dollars each and the pretty coral and white striped placemats that were on clearance for $4.50  for the four piece set at TJ Max.  A solid white tablecloth added extra brightness to the setting.  Other than that this coral sunrise sunshine table is pretty much the same as the last tablescape I posted.  Just a few pictures and even fewer words for this Tablescape. 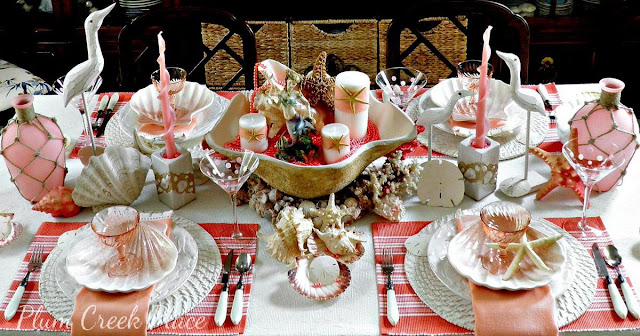 The light streams in through the dining room window early in the morning. 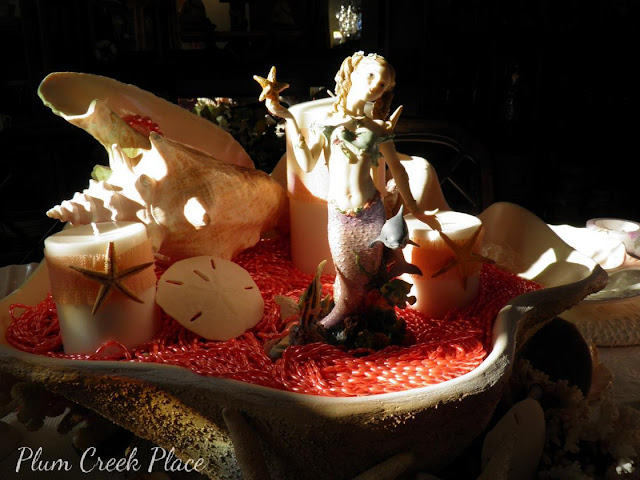 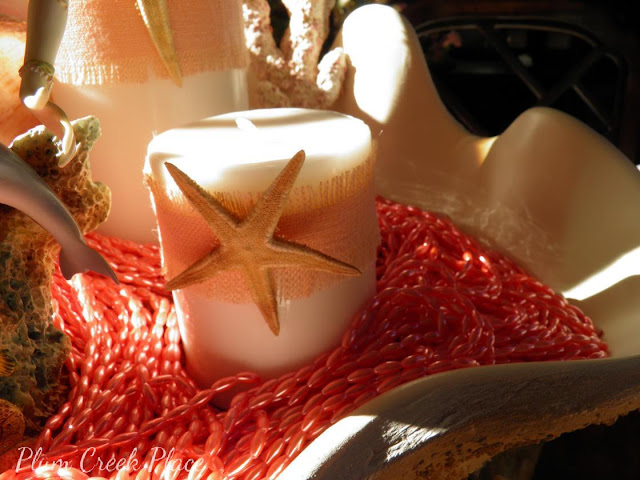 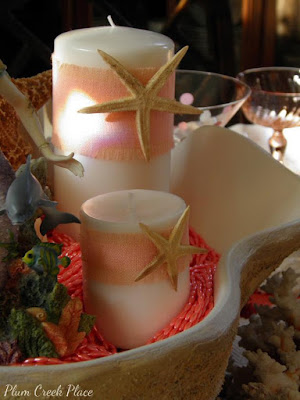 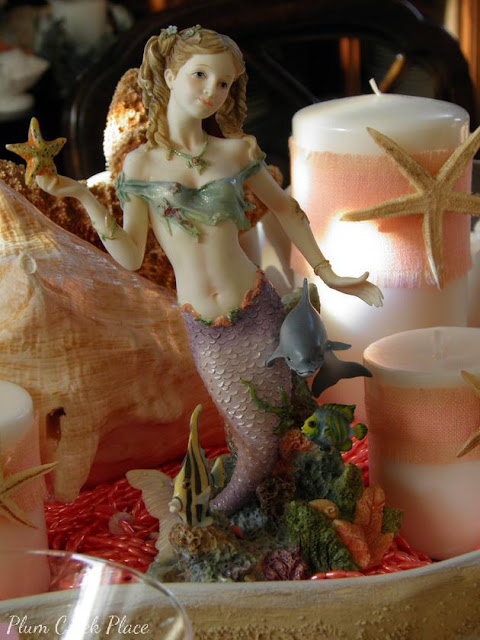 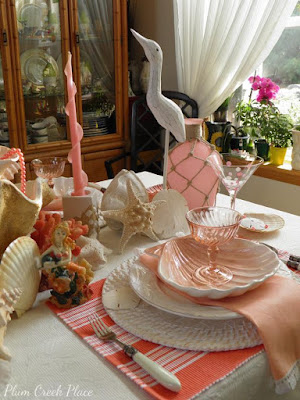 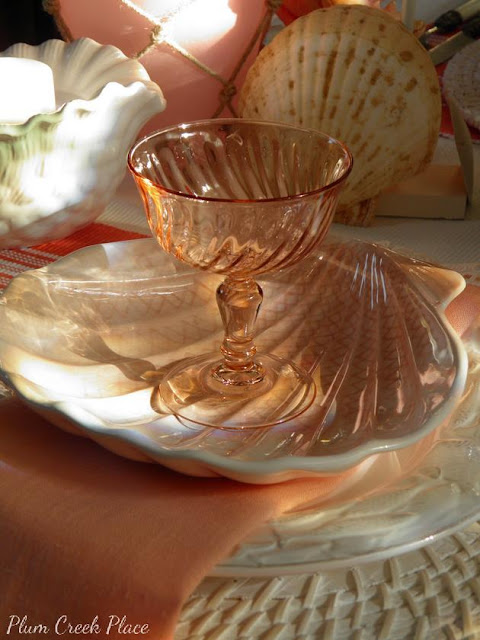 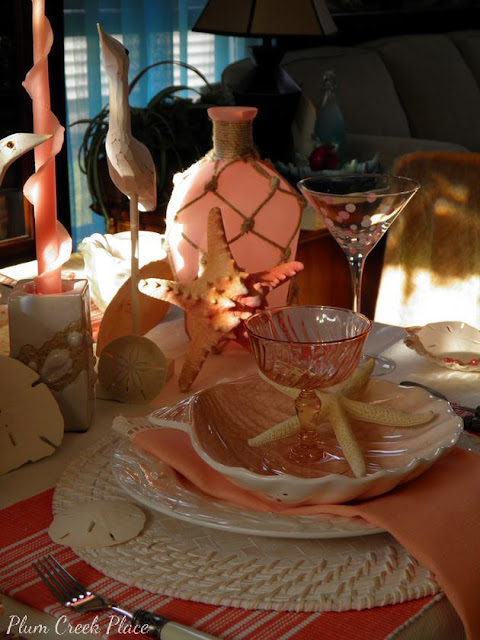 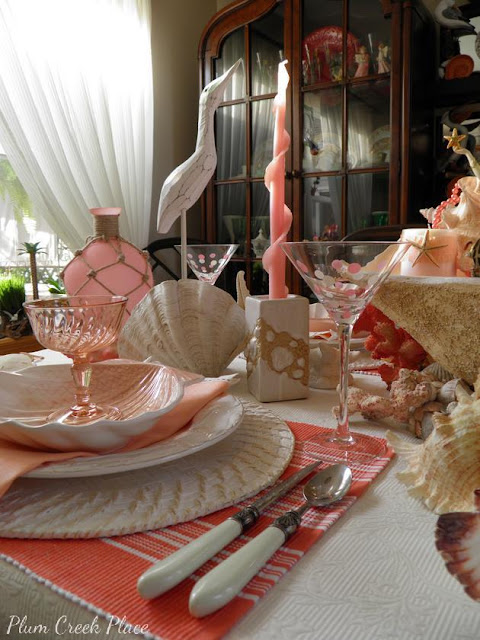 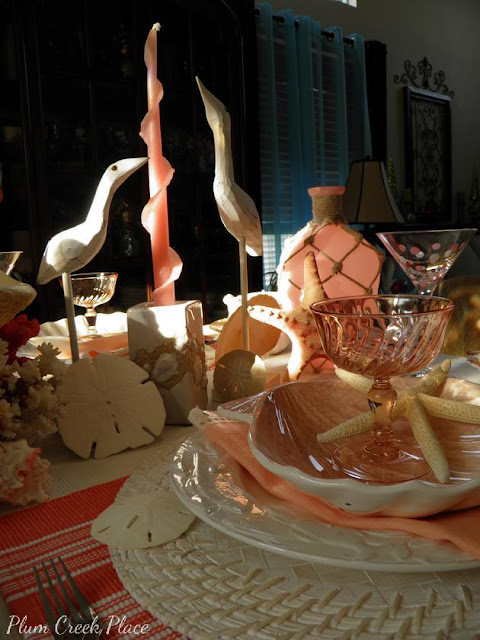 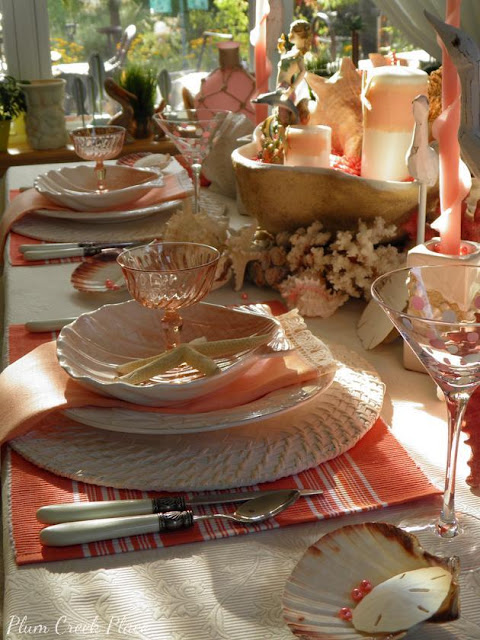 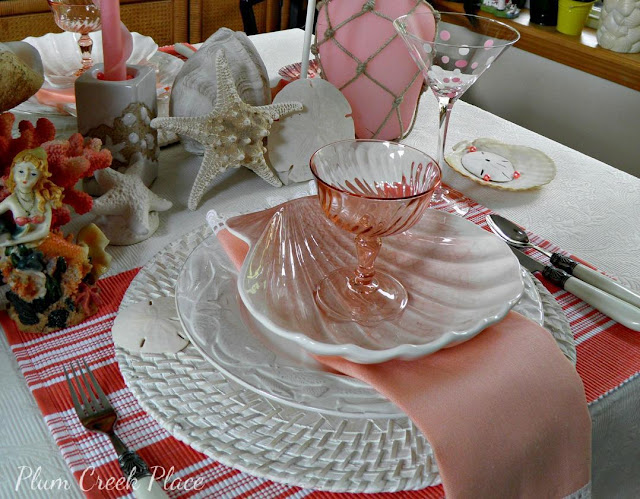 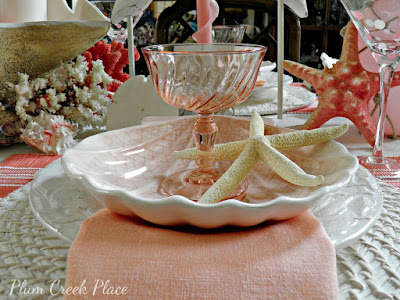 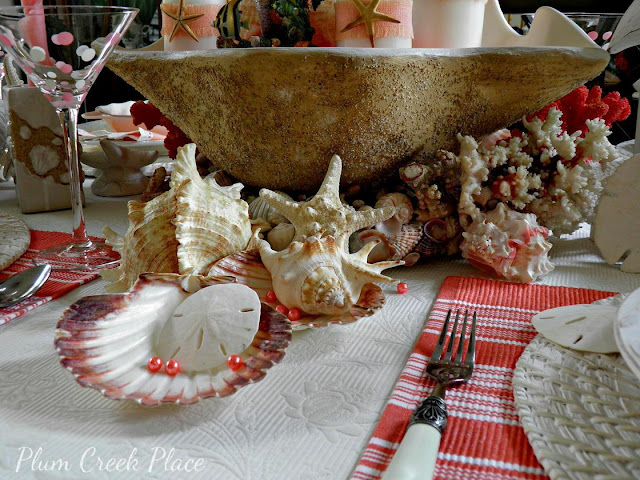 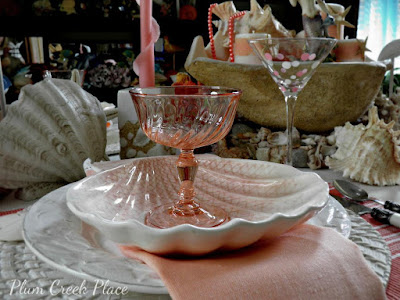 The Giant Clam Shell centerpiece was the first of four seashell projects that I wanted to make this summer.  I started a bit late but I am making steady progress on them.  My next post will be on the DIY shell encrusted candle sticks that I made this past week.  There will be a complete tutorial on how to create the candlesticks and a new tablescape. 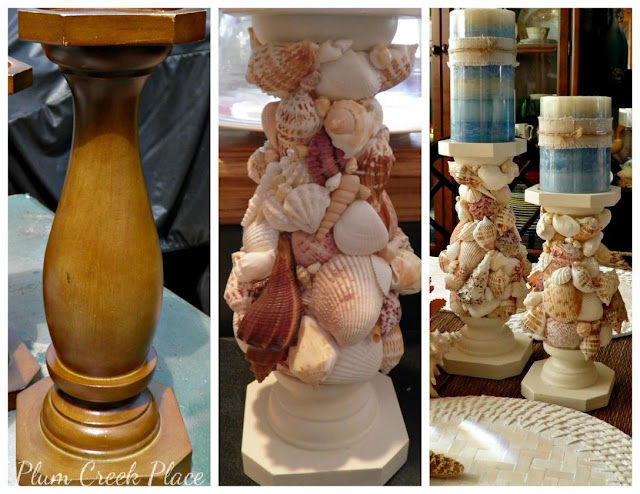 Stop by next week for details on my "Fall tablescaping package" Blogaversary give-a-way.

FYI - I receive no compensation in any form from any of the brands and places that I mention on my blog.