Did you ever have an idea for something stuck in your mind  (like forever)  and you just couldn't seem to bring it to fruition?  You really want to do it and yet can't seem to make it happen.  I really wanted to make a Mardi Gras table with some super-cool Mardi Gras mask plates that I saw on Susan's Between Naps on the Porch about a year ago.  I hunted them down on the internet and found out they were made by Muirfield,  the pattern name is Magnificence Celebrity.  I saw one single plate sold on the Goodwill auction site last year, a single plate sold on Ebay and a set of four plates on Ebay sold for an arm and a leg plus your firstborn child.  Needless to say I dropped out of the auction early on. The four Ebay plates sold for over two hundred dollars plus shipping.  So I had to improvise by making my own mask plates,  please meet my imitation Mardi Gras mask plates.

The mask is cut from prism finished paper plates and placed under a desert plate that is lime green on the outside rim and clear glass in the middle.  The glass desert plates came from Marc's (my favorite close-out store) for fifty cents each. I cut some of the masks with their prism like feathers and some without. 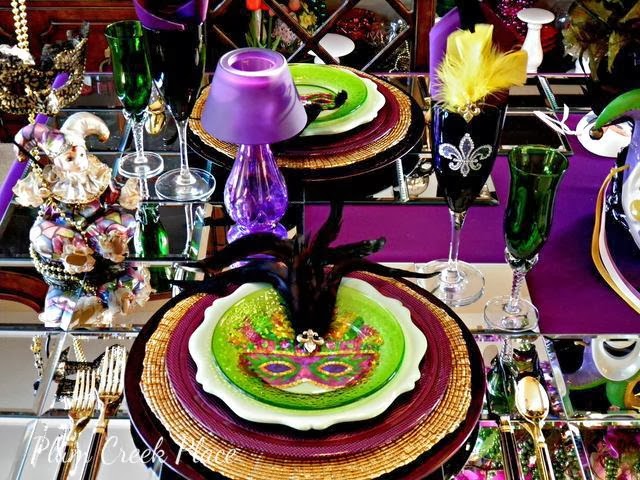 It probably should be noted that the wine glasses are improvised too.  I stuck a sticky Fleur-de-lis onto plain black wine glasses that I bought at Goodwill for fifty cents each.  The feathered head-dresses on my imitation Mardi Gras mask plates were made from black feathers and metal Fleur-de-lis clips that I bought at Hobby Lobby at two dollars for eight clips.  I made my own royal purple napkins (and tablecloth) and the yellow feather embellishments to place into the wine glasses. 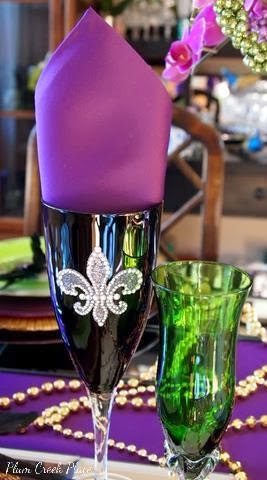 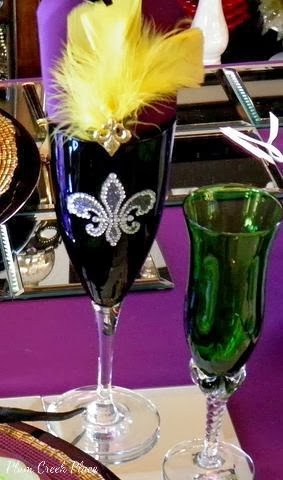 The centerpiece is a mask from Pat Catan's,  some lime green and purple Christmas berry stems from Marc's,  and orchids cut from my own plants.  The orchids had been in bloom for over three months and were rapidly fading so I trimmed what was left of the flowers to add to the vase holding the centerpiece.  The vase came from Goodwill for two dollars. 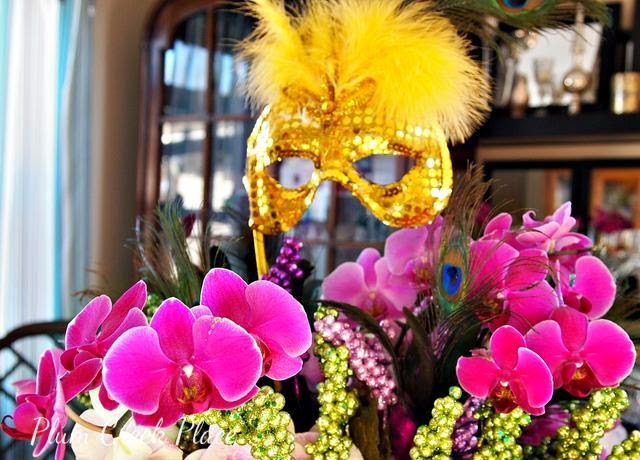 The peacock feathers are recovering from a near fatal incident that occurred the night after I took the photographs for my Paradise in Blues Tablescape post.  It seems one (or more) of my four cats has a  taste for peacock feathers.  After we went to bed on the night in question one of my sweet little cats proceeded to pluck every peacock flower in the centerpiece and from the napkin holders. I have my suspicions of who the perpetrator was. Looks innocent doesn't he?  This is Cheetah.  He is one of several feral kittens that I captured and brought home to civilize several years ago.  Obviously you can take the cat out of the jungle, but you can't take the jungle out of the cat. I did manage to salvage several of the feathers,some had to be trimmed of their damaged areas.  But all in all they worked out fairly well. 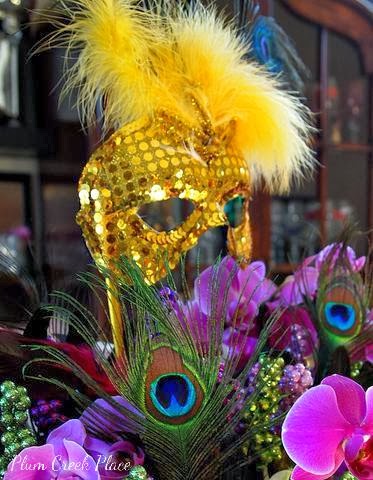 I found several ceramic masks last week when I went shopping at Goodwill with my friends Gloria and Kathleen during our lunch break. 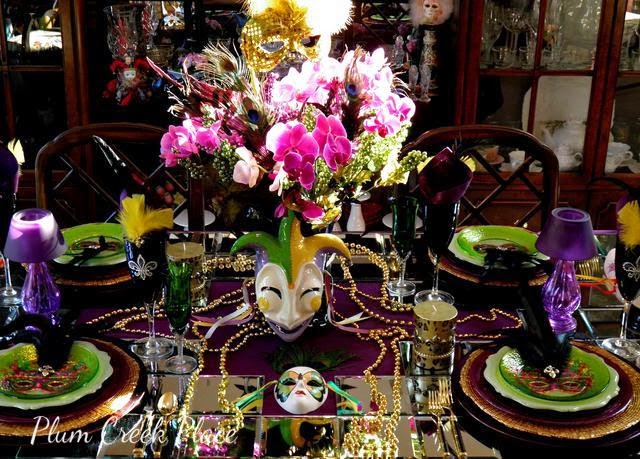 The purple votive lamps just happened to come in at Marc's this morning.  Some of the beads came from our visits to New Orleans over the years,  some were bought at Goodwill.  The mirrors on the table came from Marc's (I'm not to sure if I like them). The Fleur-de-lis candles are from Hobby Lobby (half price of course).
The dark purple chargers are a Goodwill find,  the gold chargers are from the HomeGoods Store, the light green salad plates are from Goodwill,  the purple diner plates are also from HomeGoods, and the flatware came from an Ebay auction. 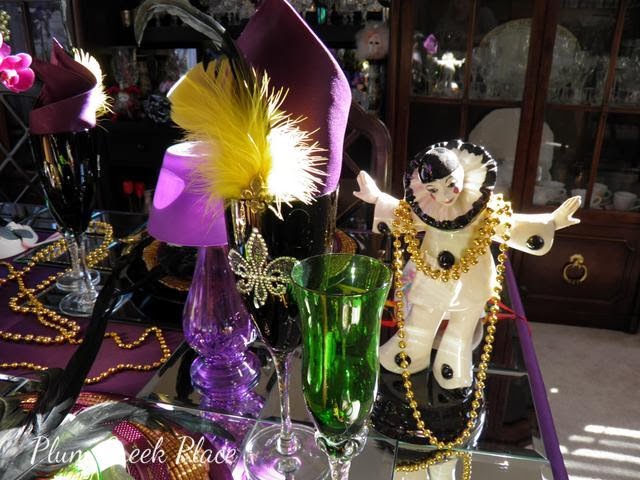 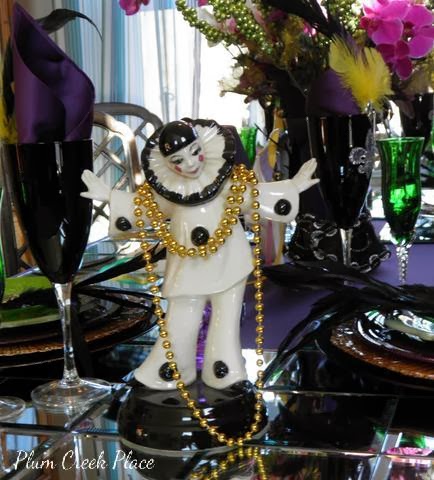 My little friend in the white clown suit looks as if he is taking a bow,  perhaps for a job well done? 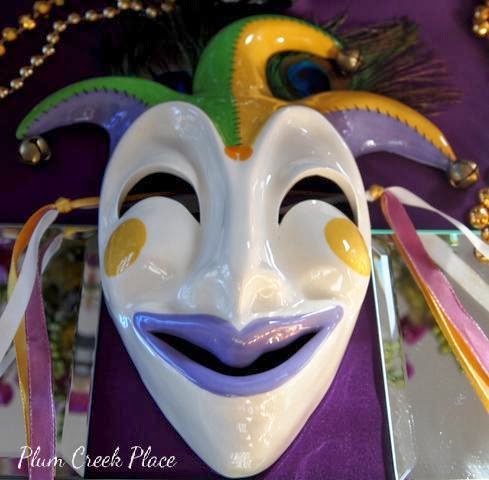 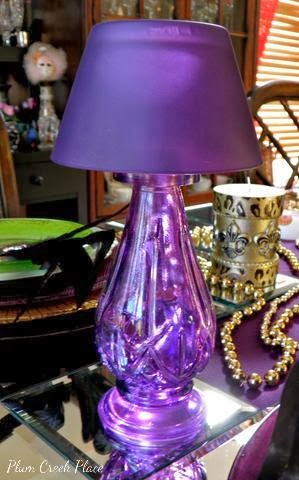 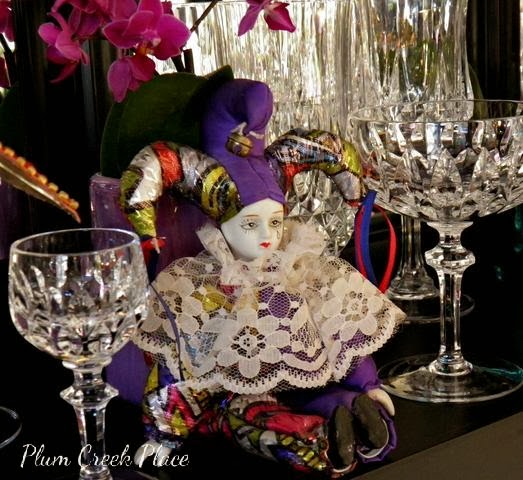 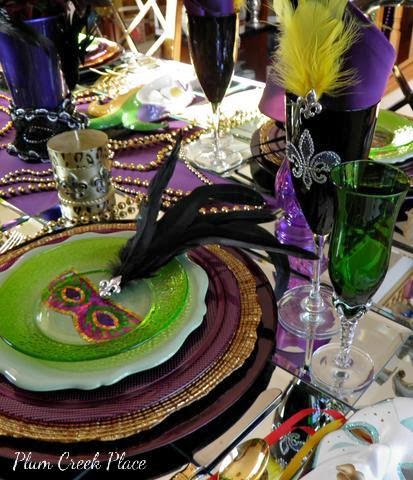 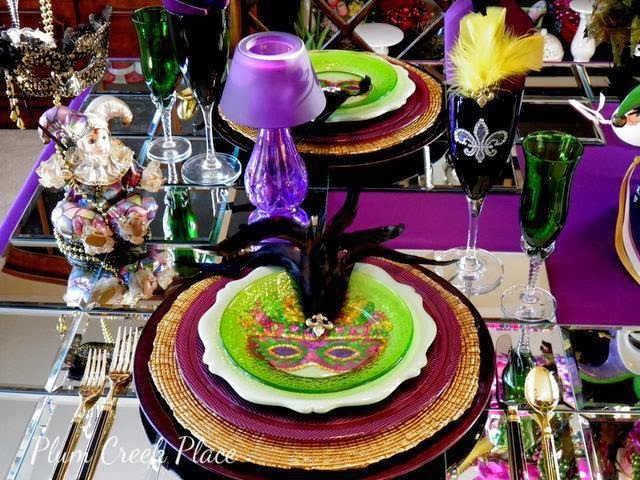 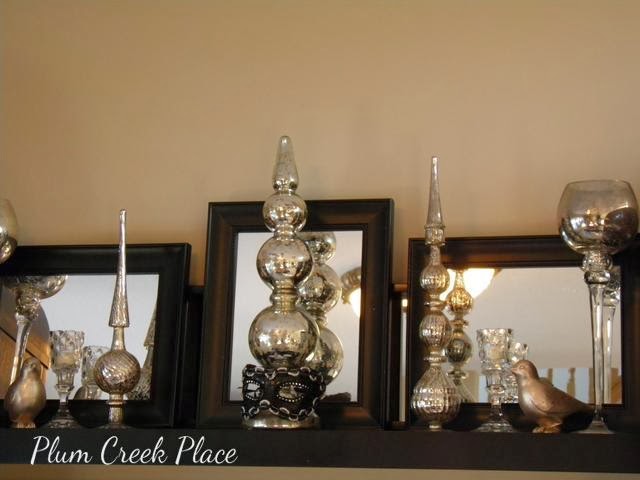 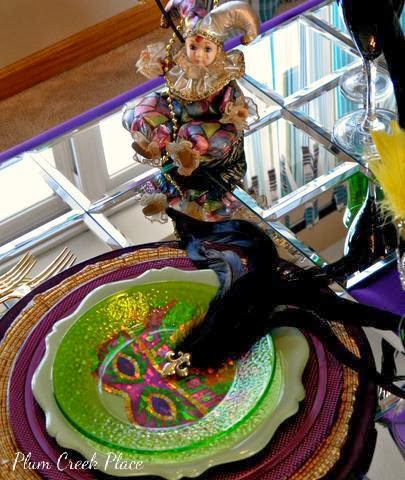 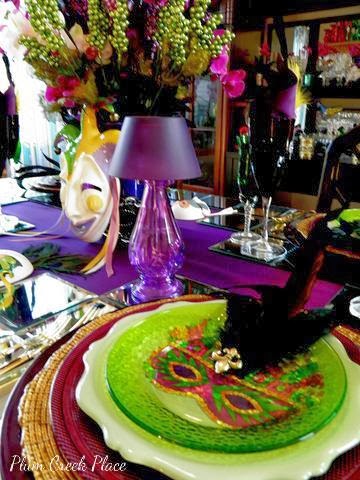 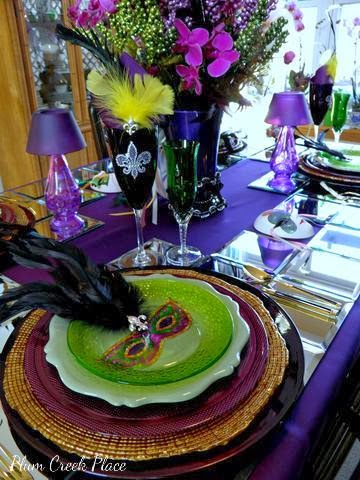 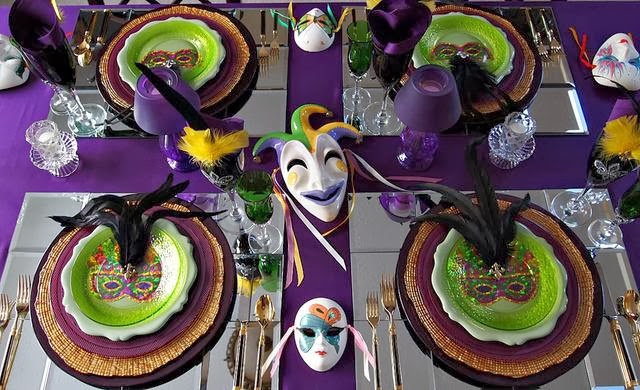 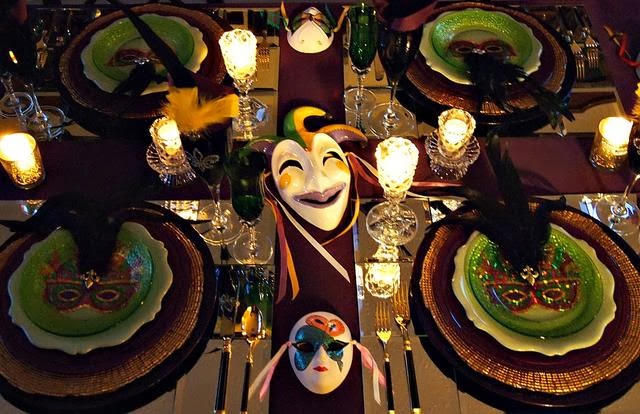 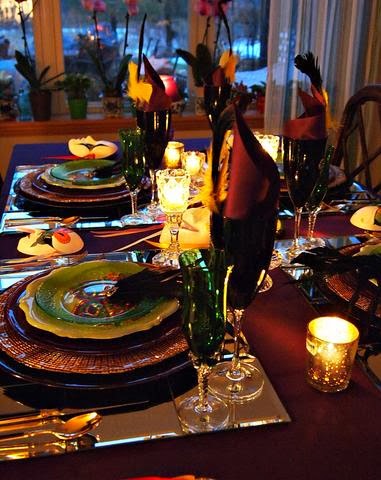 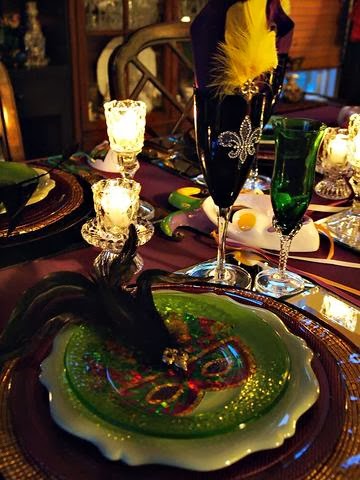 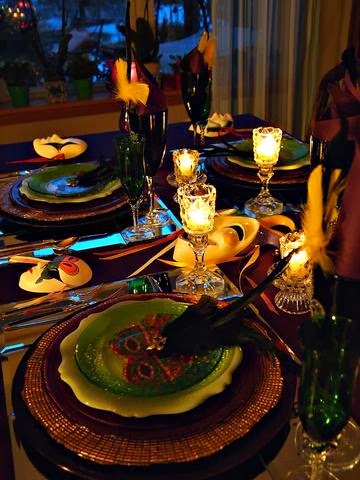 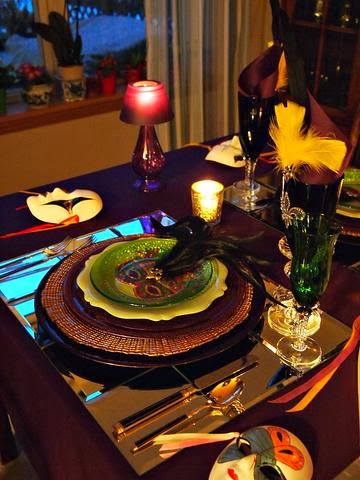 Have a Wonderful week!  Thrift on ladies,  thrift on.

Kathe's You're Gonna love it Tuesday

Karin's Twirl and Take a Bow

The Scoop - Visiting for Debbie's Confessions of a Plate Addict