In The Jungle Birthday Table Setting

Mother's day was celebrated with three of my four son's in attendance this year .  We had a hearty homemade country style meal served on jungle themed dinnerware.  Now that may sound a bit bizarre, a jungle theme is not the norm for Mother's Day,  however we were celebrating my son Bobby's birthday too.  Normally we celebrate his birthday on the Sunday before Mother's Day but this year we combined the two occasions.  I usually create a Cinco De Mayo fiesta table for Bobby's birthday but he wanted something different this year.  Being the good Mom that I am - I made sure he got a "different" table setting to celebrate with this year.  While Bobby was not born on Mother's Day,  he did come home from the hospital on Mother's Day.  It seemed that a joint celebration on Mother's Day would be most appropriate. 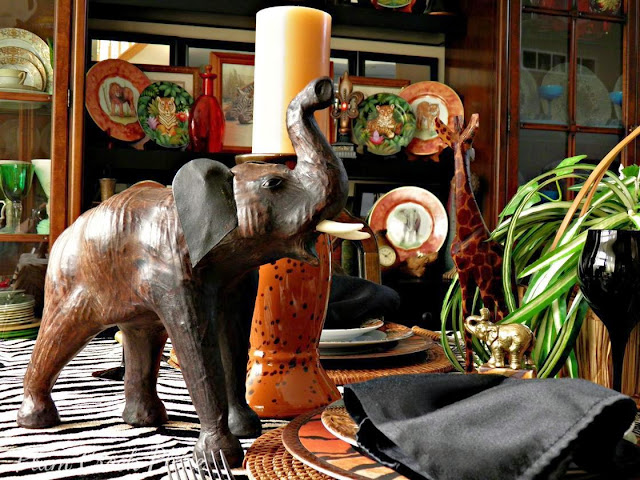 All of the boys wanted an old fashioned country style meal like Grandma used to make.  A big old mess of green beans cooked with fat back bacon and Irish potatoes quartered up and thrown in for the last twenty minutes and cooked tender in the bacon and bean juice. There were plenty of sliced tomatoes and green onions and a cake of corn bread seasoned with bacon drippings with lots of crispy fried bacon baked into the cornbread.  I made fried pork chops as requested by the kids. My daddy always loved pork chops with cornbread and green beans. Oh Yum!   I can cook with grease with the best of them.  ~~~ Move over Paula Dean ~~~ 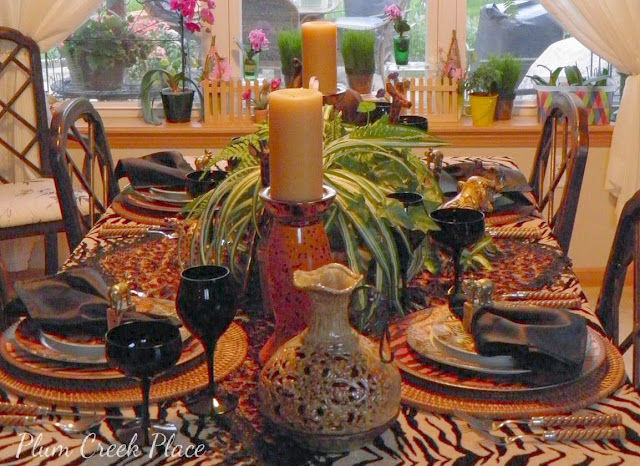 The cake was my country version of Boston Cream Pie made per usual (yellow cake sliced and filled with vanilla pudding) but with hot fudge sauce (homemade of course) poured over the top of the cake.  We did not take any pictures of the food or table on Sunday.  I recreated the table during the week and waited for a day with enough light to take pictures. 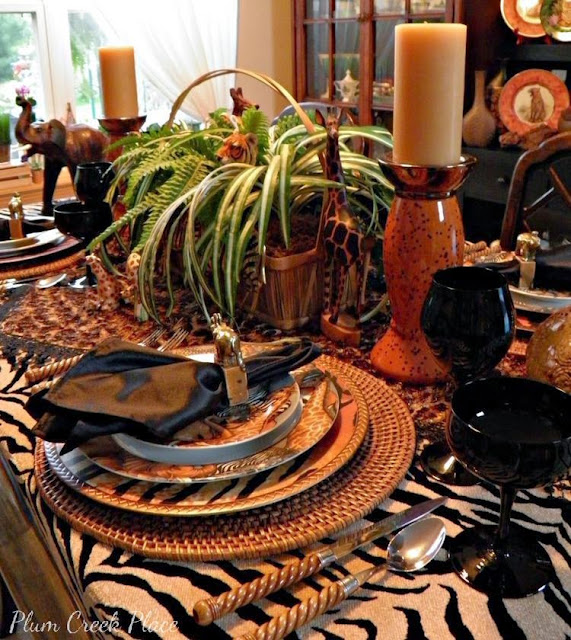 This table started as an idea several years ago.   I was influenced by several wonderful jungle tables that were shared on Tablescape Thursday at BNOTP over the years.  With the exception of the candles, the small elephant place card holders, and the cheetah scarves that were bought at Marc's and the Tiger Charge it By Jay chargers that I bought from Christine's (Christine's Home and Travel Adventures)  moving sale on Facebook, everything else was thrifted over a period of several years.
The table cover 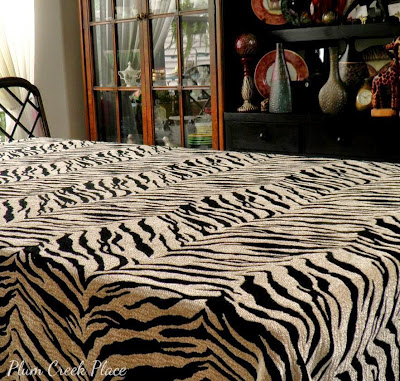 This striking zebra pattern of this duvet cover caught my eye at Goodwill a while back.  It had just come in as a donation complete with the original tags.  The duvet cover reversed to solid black textured velvet on the other side.  I took the seams out and made a table cloth from each side.  I used the black side for my New Years Eve post "A Horn Blows At Midnight"  which you can see HERE . 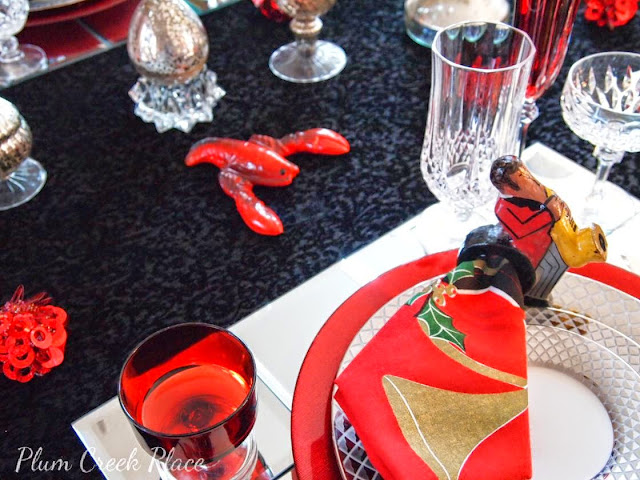 Next I laid out the cheetah pattern scarves that I had bought from Marc's and placed a thrifted basket of greens on top of the scarves (a thrifted zebra metal plaque was leaned against the basket). 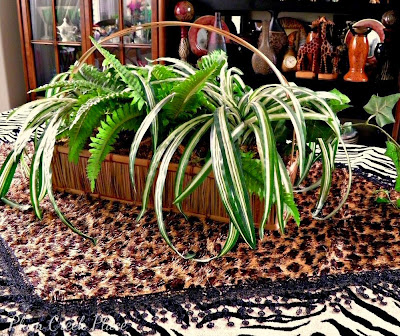 The wicker place mats came next 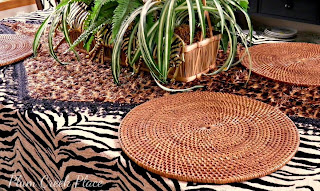 Followed by the lovely chargers from Christine. 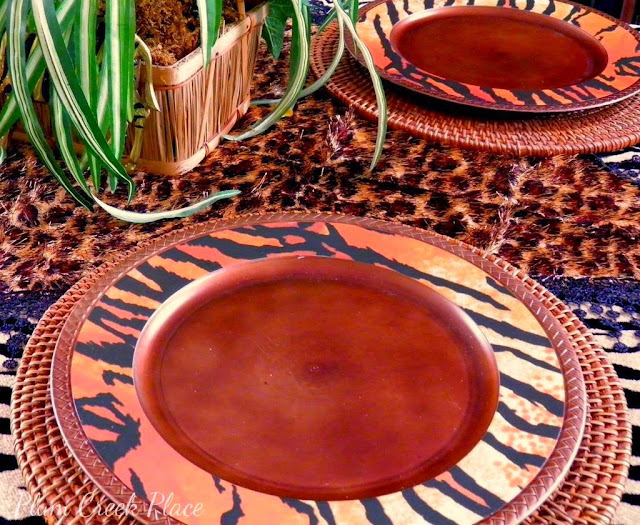 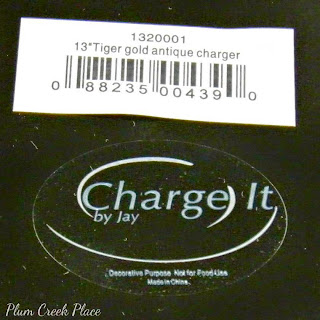 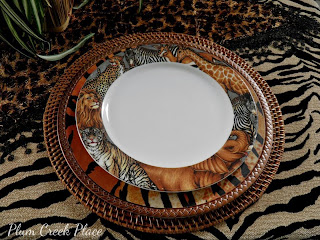 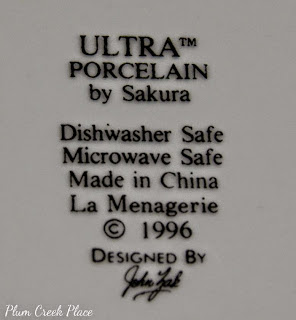 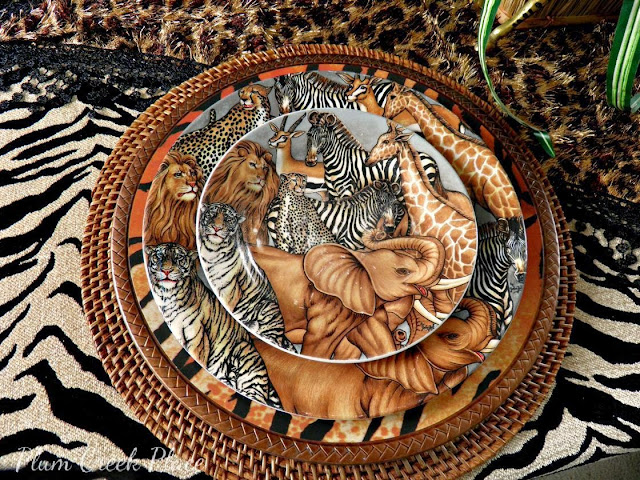 The Tiger pattern of the charger plates are perfect with the dinnerware pattern.

The napkin rings were bought at the VOA last week - 16 rings for $2.99. The brass elephant place card holders were placed on top of the square napkin rings. 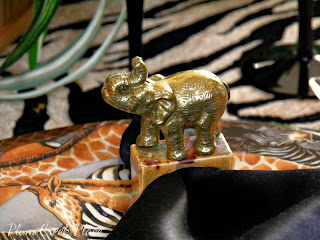 Giraffes and elephants as well as a tiger or two populate the Jungle's edges. 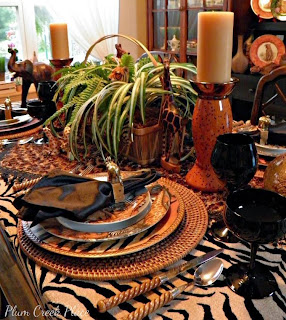 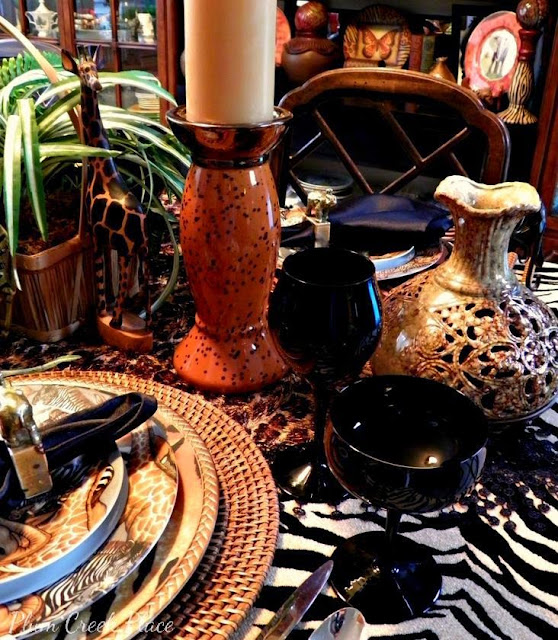 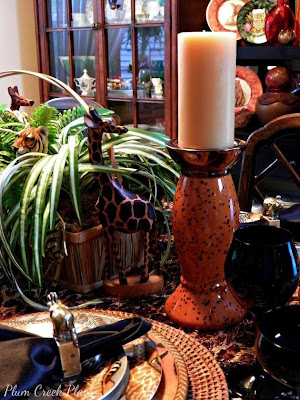 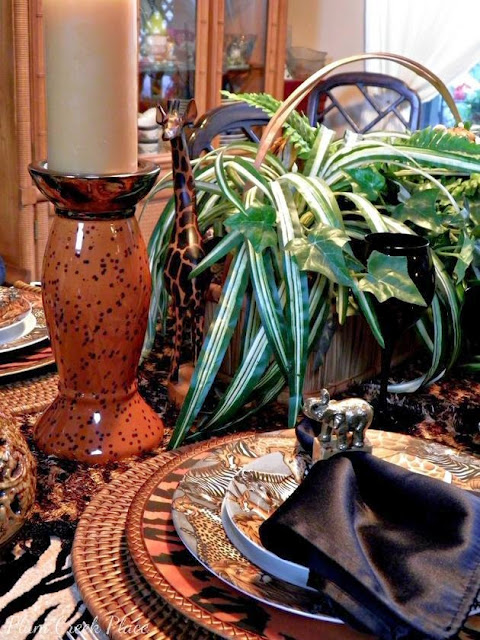 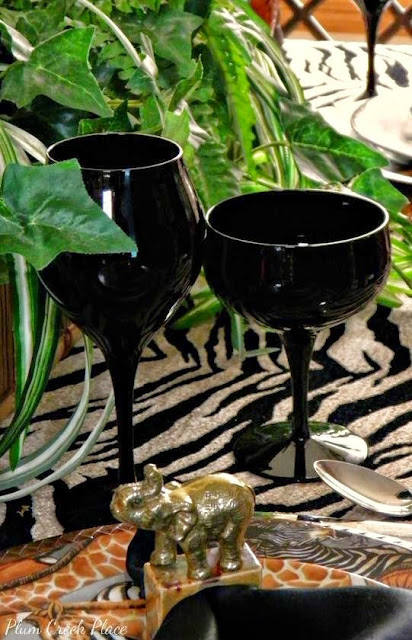 The giraffes are from a local garage sale last year. 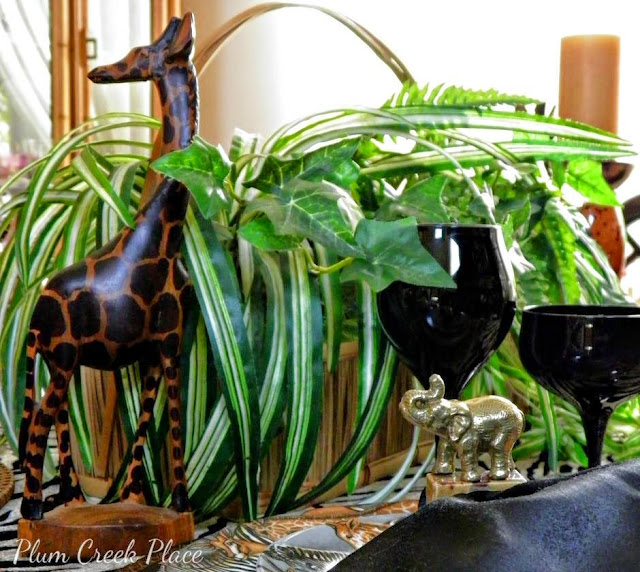 Tigers peek out from under my jungles canopy. 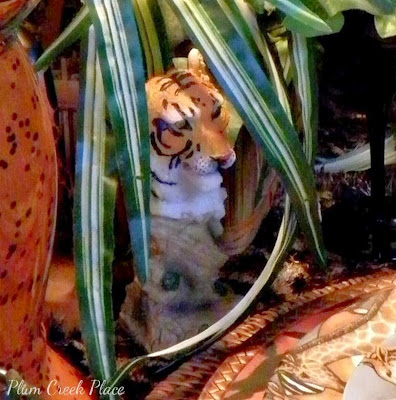 The orchids have started to bloom again. 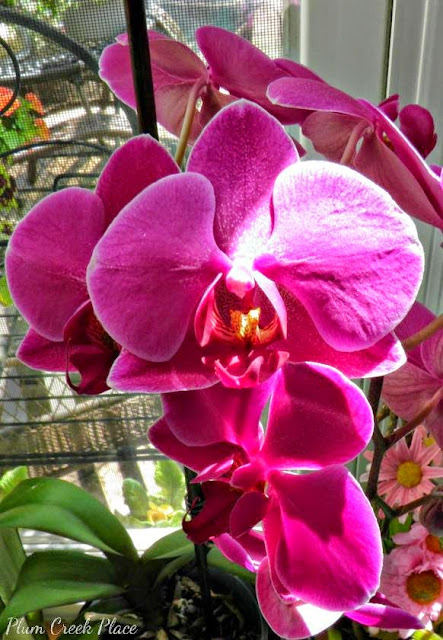 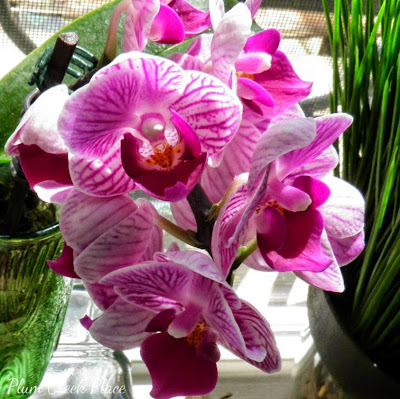 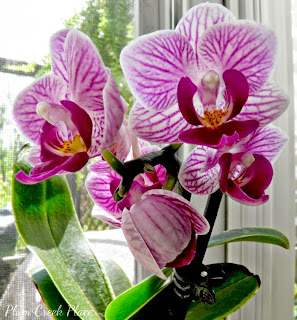 The giraffes and the pictures on the shelves are from a garage sale that I went to last fall.  When I explained that I was doing tablescapes with the stuff that I was buying they gave me a huge discount on the items I had picked out.  When their daughter looked up my blog on her smart phone and they saw how I decorate the shelves to follow the theme of the table the lady having the garage sale had her husband pack up many of the items that you see here including the butterfly animal print plate and a set of zebra pattern chargers too!  There are many other items from this garage sale that I will be using in upcoming tablescape posts.  I am thinking another jungle table later on towards fall and another tropical "by the sea" table setting in a few weeks. 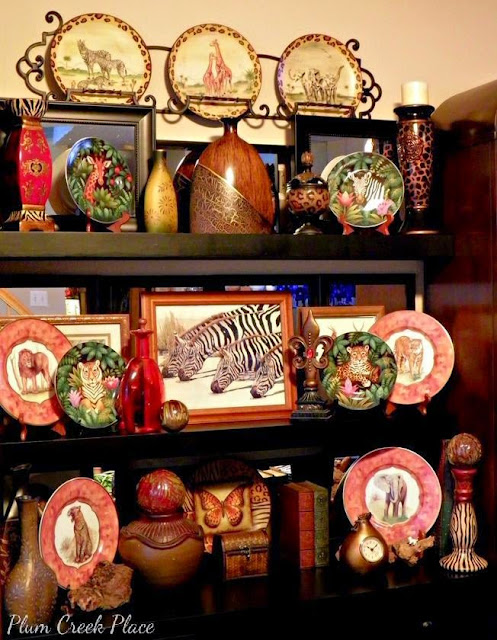 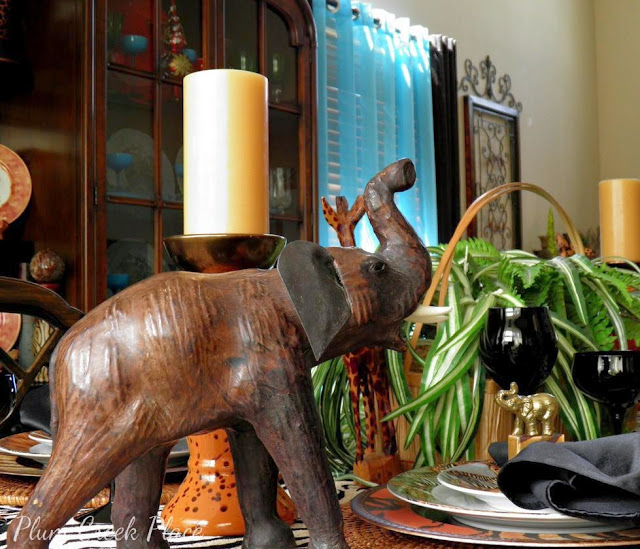 I have been occupied with packing up "stuff" to go to storage and trying to clean and repair as I go in anticipation of putting my house on the market within the next year or so.  This has become an overwhelming and daunting task. I am not really up to doing a lot of the heavy work so it is a very slow go. I think I need to have a huge garage sale myself to get rid of a lot of the "stuff" instead of packing and moving it. Dozens and dozens of boxes of stuff  have already taken the ride to the Goodwill to be donated over the last few months.

I have not been taking the time to visit and stop to say hello to so many of my blogger friends.   Shame on me!  I will be stopping by to visit soon - I miss you all!!