Cuisine Kathleen's challenge to create a "Girls Night Out Tablescape" seemed as if it would be easy when I first thought about it.  In reality this challenge sent some perplexing thoughts wandering through my mind for several weeks now.  Just exactly what does girls night out mean to me?  Join me on my journey as my thoughts meander through a lifetime of  "Girls Nights Out" and the thoughts on creating a girls night out table setting.


First a quick look at the table setting 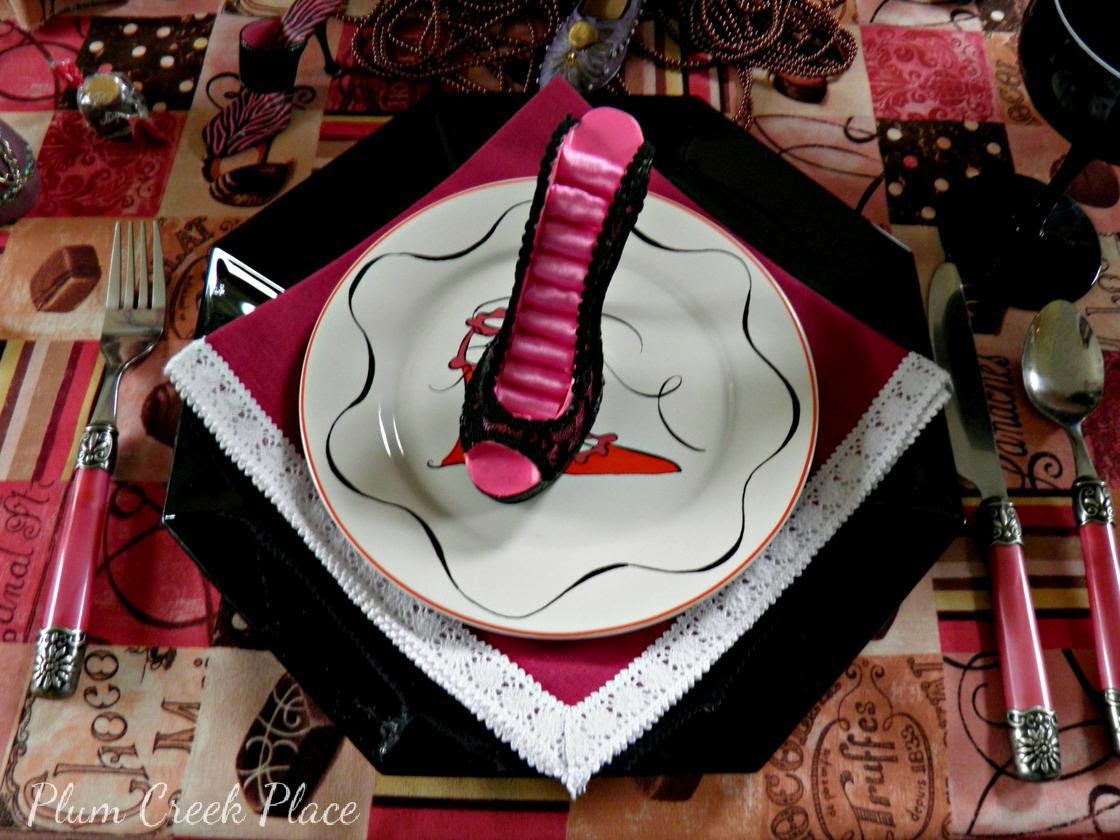 As I started gathering up the different items that I had been collecting to do a girly tablescape for a year or so my mind kept wandering to thoughts all of the adventures that I had had on my "Girls Night Out" escapades through the years. One of my first memories of going out with the girls was when my girlfriend Marla's mother drove us down to the Polish Women's Hall for the weekly Friday night dance.  Sounds innocent enough right?  Well it was,  but my Daddy had forbid me to go to these dances.  Oh but we had a ball.  I still remember exactly what I wore,  a pretty gray sweater with a deep pink skirt and a perky pink scarf around my neck.  We had so much fun dancing to a band (probably just a neighborhood band) we even hammed it up when a local TV station came in and taped the kids out dancing on the floor.  I made it home before my 11 O'clock curfew and well before my Daddy came home from work on the night shift.  When Daddy came home on Friday nights we would pop some popcorn and gather around to watch Ghoulardi,  a Cleveland TV legend played by Ernie Anderson who later became a nationally recognized voice in commercials and TV programs.  Drew Carey used to wear his Ghoulardi t-shirt on his TV show.  As we settled down to watch whatever ghoulish movie that was showing that night they opened the show by broadcasting the images of the kids dancing at the local dances that evening.  They had never done that before........ Well you know what happened then,  I will never forget my father turning around to me (still wearing my pretty gray sweater and pink scarf) and stating with a deadpan look on his face and a flat voice that I looked just like the girl on TV.  I think I was grounded forever.

I had to make a trip over to my storage unit to pick up a piece of material that I had bought at Goodwill last year.  I had rolled down the window and was playing old time rock and roll (Cleveland is the Rock and Roll Capital of the World you know),  it's the kind of music that gets in your soul (hehe) and reminiscing about the adventures my girl friend Dee Dee and I had with a couple of other gals from the office cruising around Southgate USA.  The premier shopping center in the country at that time and the best place to be seen for a bunch of young chicks in a 1960 Corvette convertible, rain or shine, snow, sleet, or hail.... we would be cruising.  I used to think the Beach Boys wrought all of those songs about us.  I feel sorry for kids today,  what do they have?  Justin Bieber..... that thought would give me the creepy shivers.

I had to dig around in the garage to find a box of beads, a heavy box of beads.  I had bought packages of different colors and styles packed together in about five pound bags for one dollar each several years ago from Marc's.  I thought this would be a good time to use a few of them. 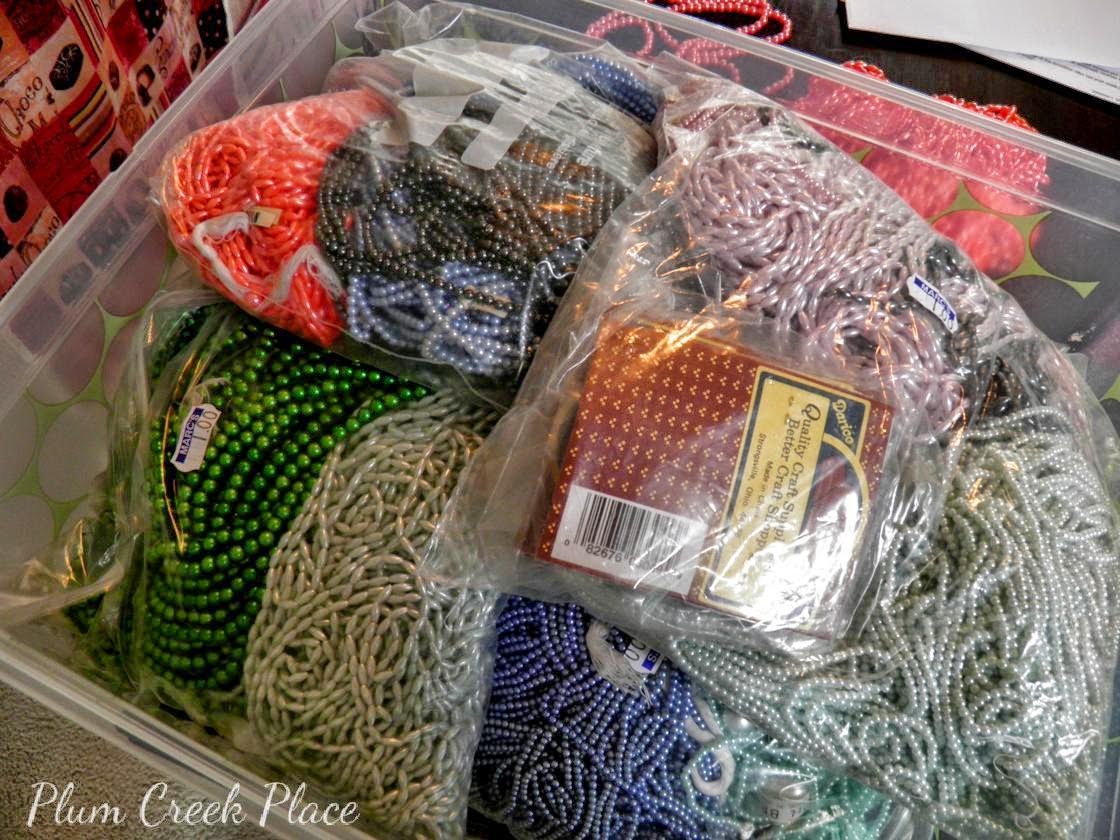 Pink flowers with brown stems from Marc's a few years back were perfect for the centerpiece. 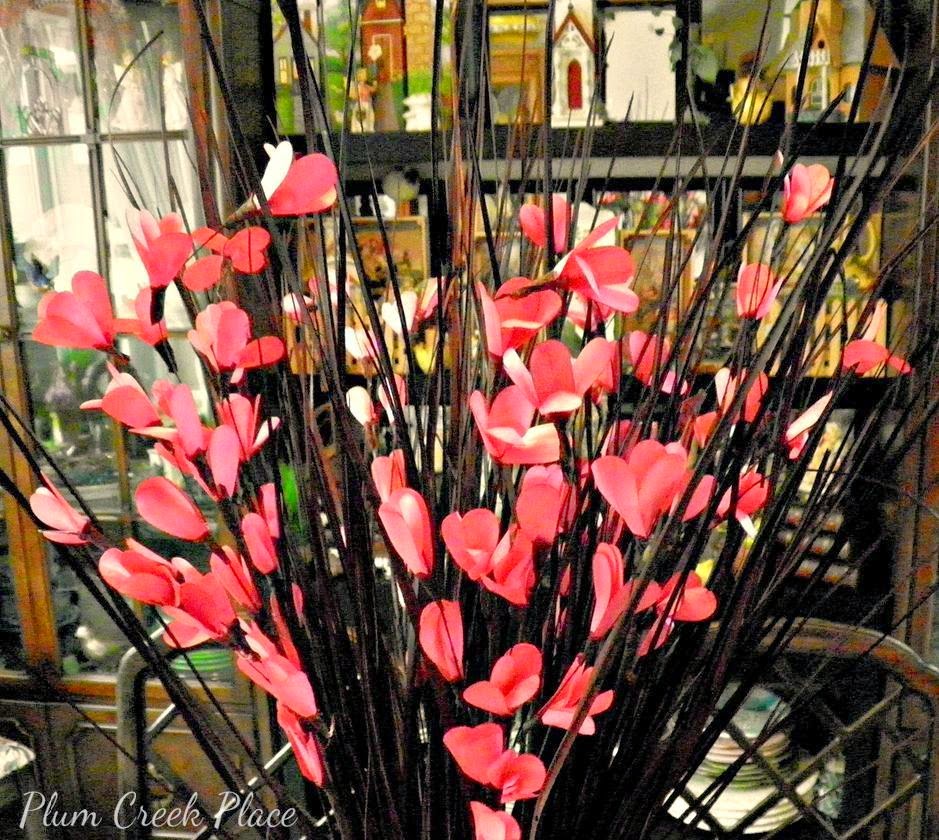 When I married (at a very young age) there were no more girls nights out except for PTA meetings, cub scout and boy scout meetings, and going to TOPS club meetings and shopping with my mother.  Now that I look back at it I realize that my Mom was truly my best friend.  When we went out it was girls night out!  We would go to dinner at Chinese restaurants (my dad was a steak man) and then go to weigh in at our TOPS (Take Off Pounds Sensibly) Club meetings a few days later.  We would shop and then we would talk almost endlessly.  Mom and I were the feminine side of the household that I grew up in.  My father and my two brothers plus three of daddy's brothers probably helped forge the relationship my mom and I grew into as I grew older.  When dad and mom retired and moved south my life changed but I found new friends and hobbies but none ever replaced the relationship I had with Mom.

Back to the tablescape
I found my box of girly stuff that I had been collecting and
laid them out down the center of the table. 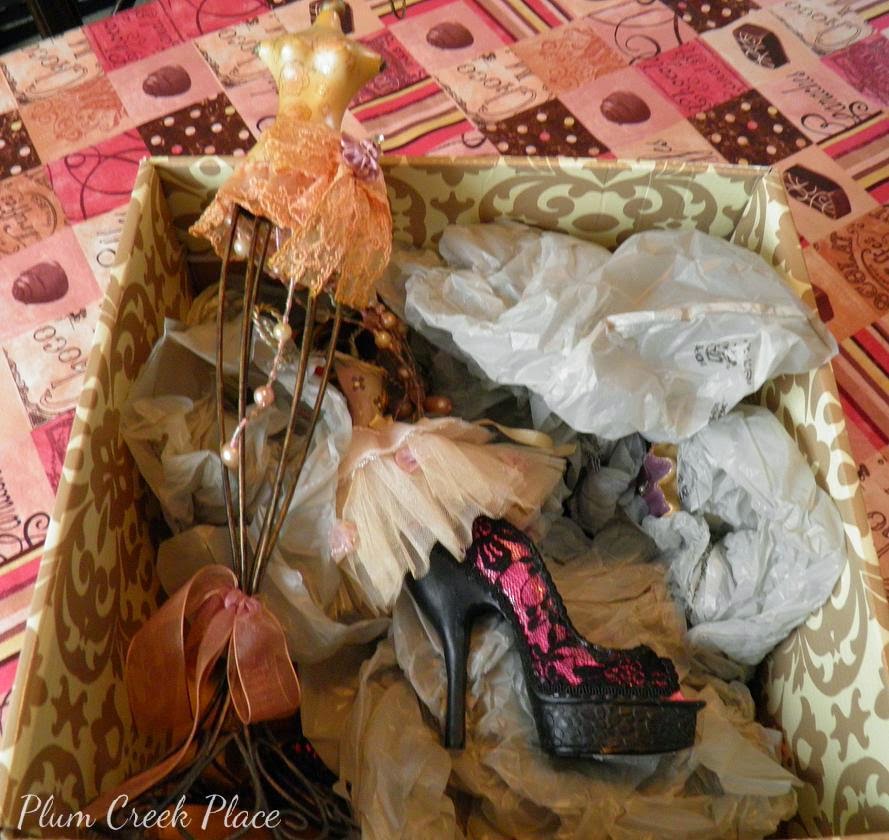 The pink and black ring holder shoes are perfect for a party favor. 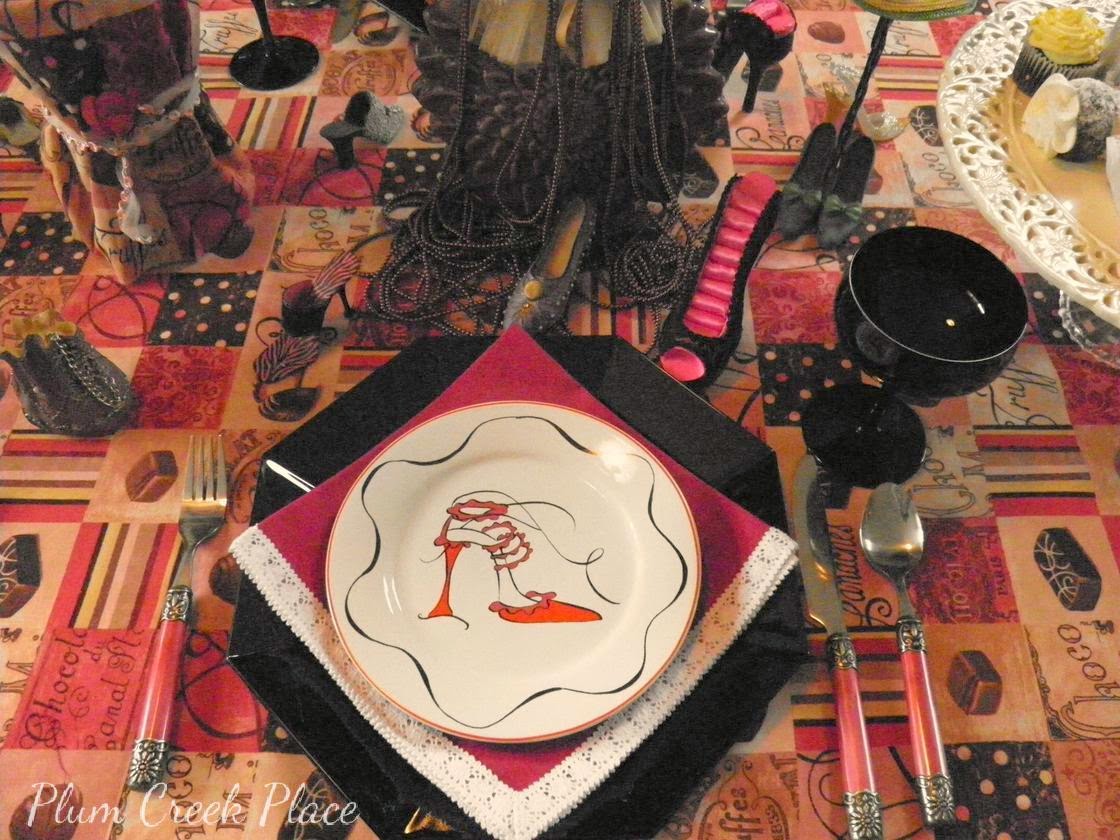 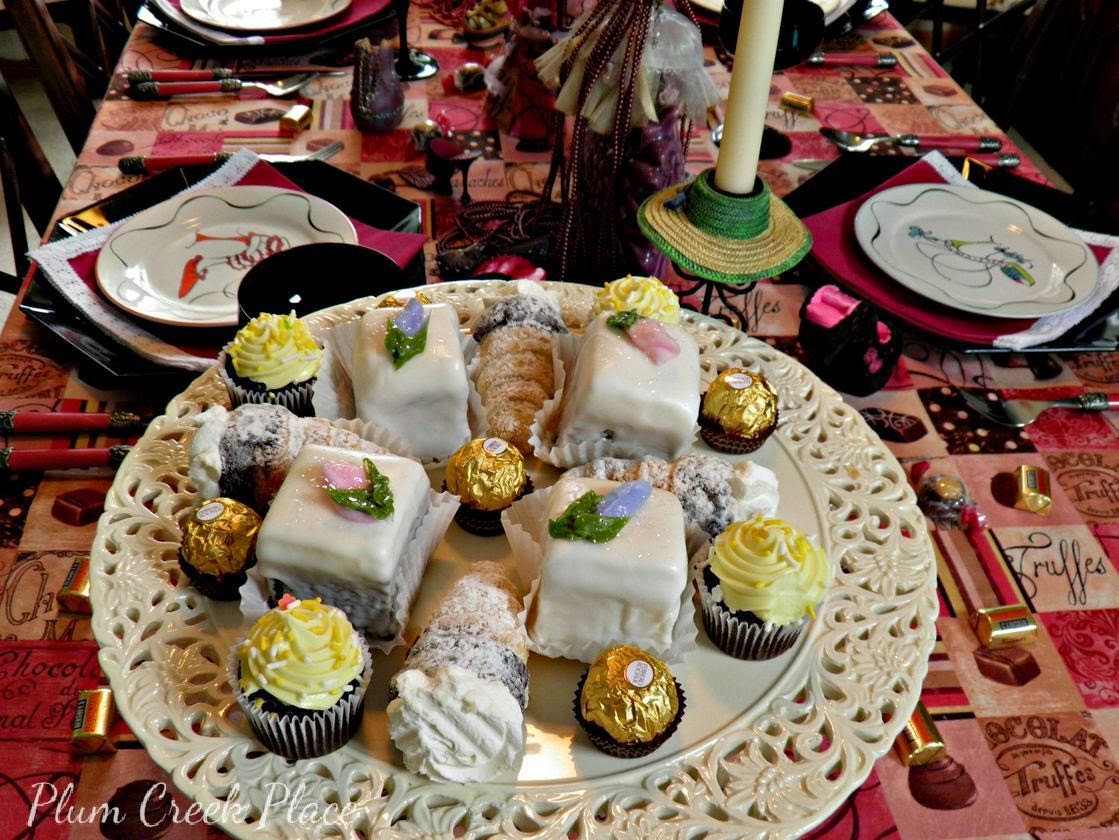 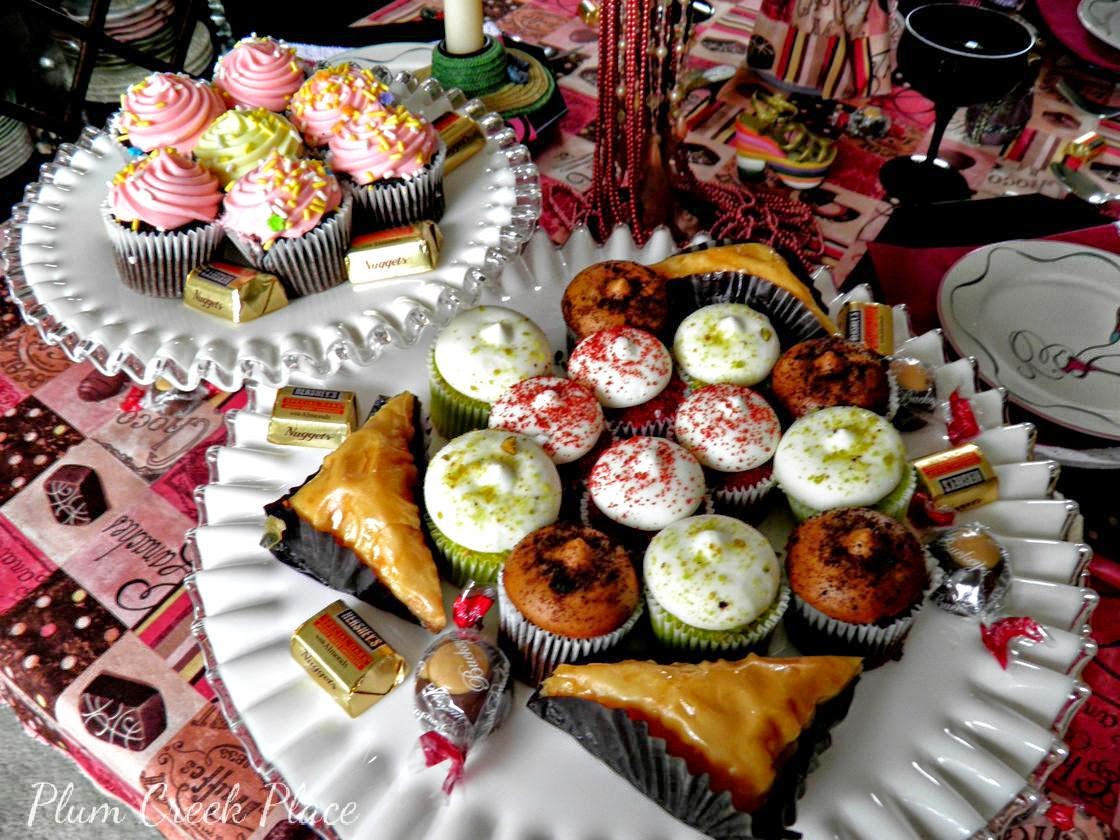 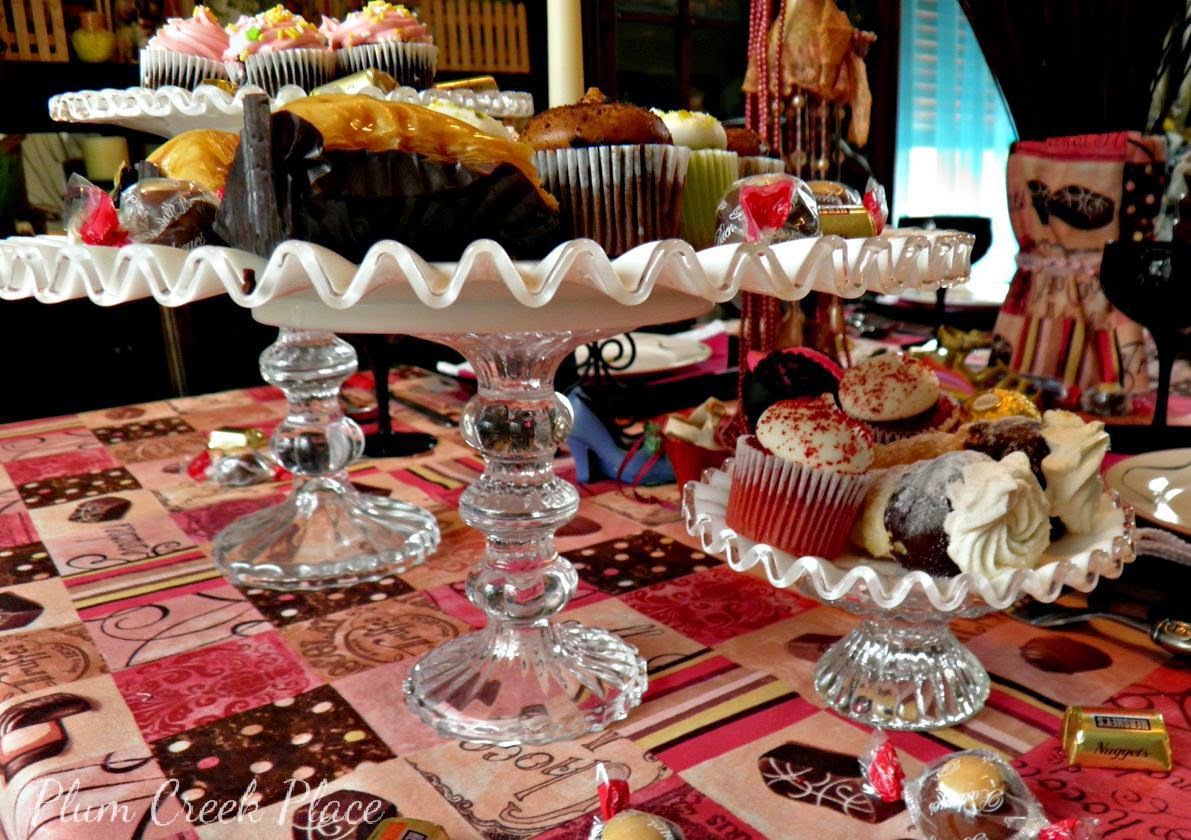 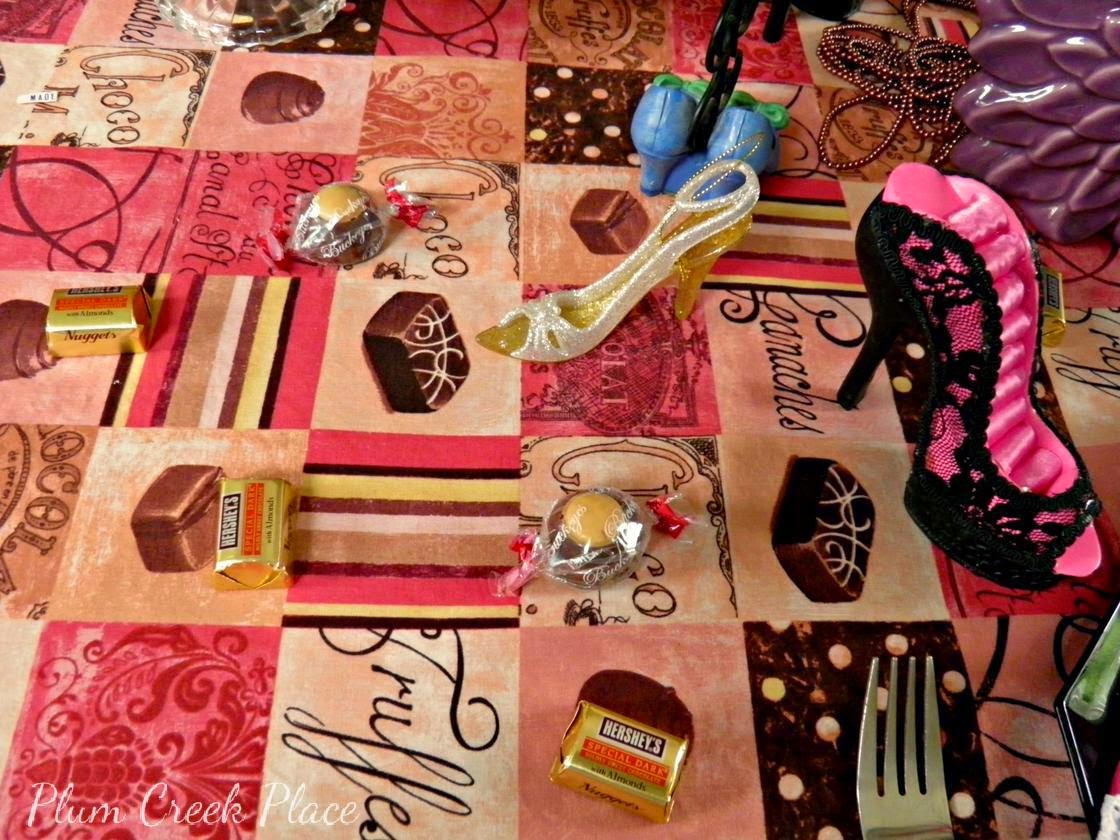 Hard to tell the chocolates on the tablecloth from the Hershey's and the buckeyes isn't it?
Pretty napkins from Goodwill. 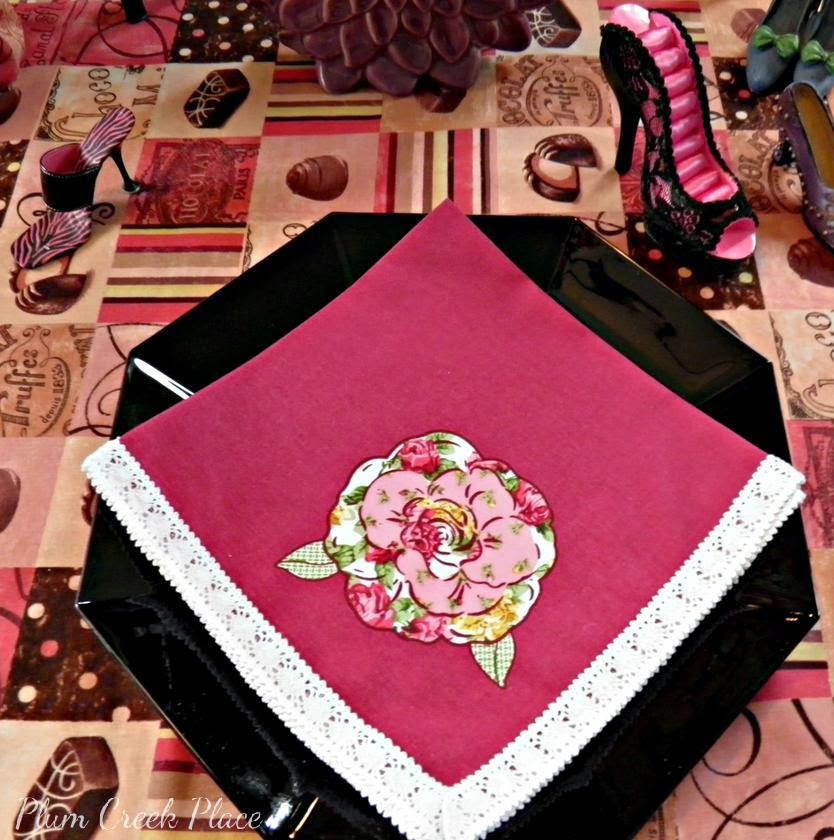 A jewelery holder holds the chocolate beads
in a most feminine way. 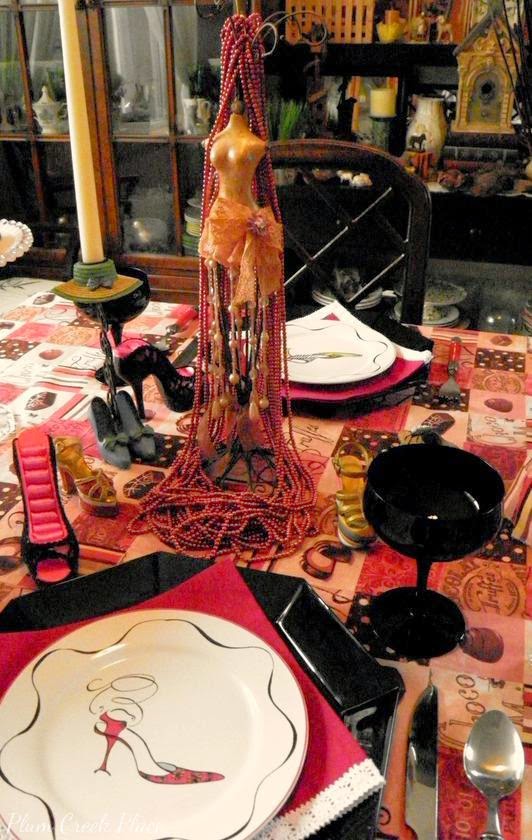 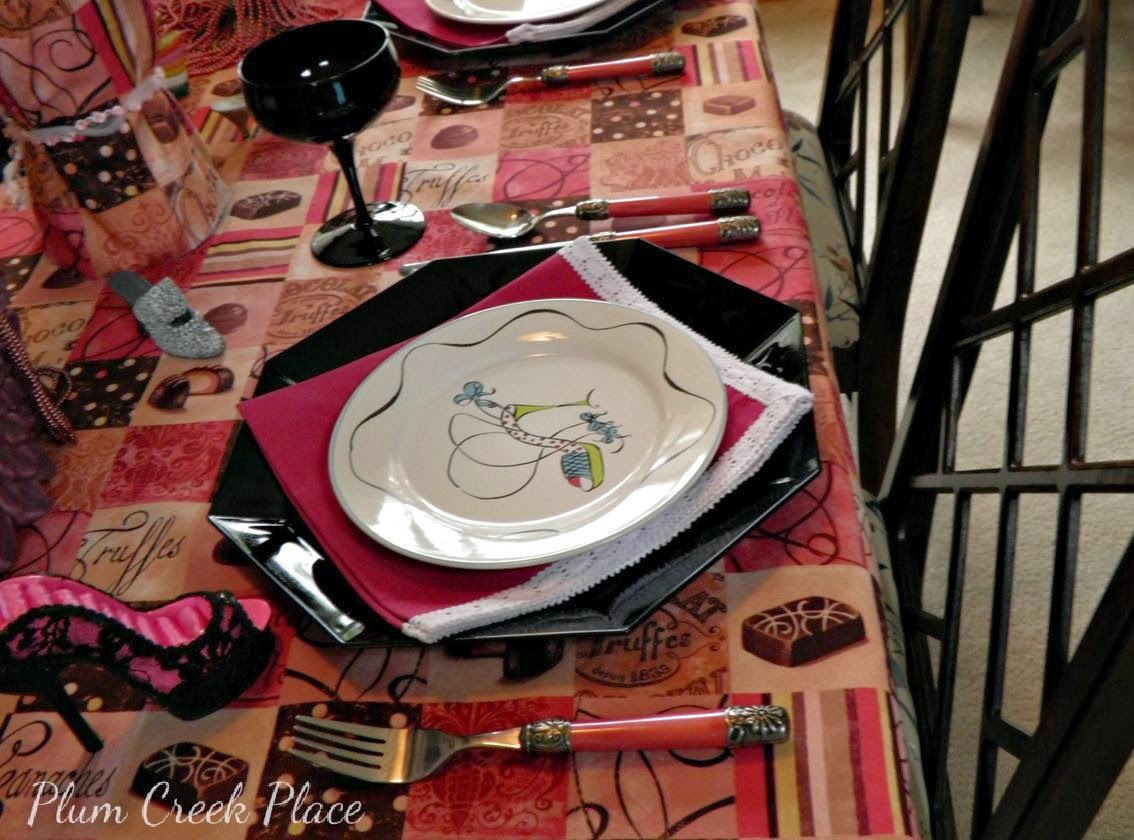 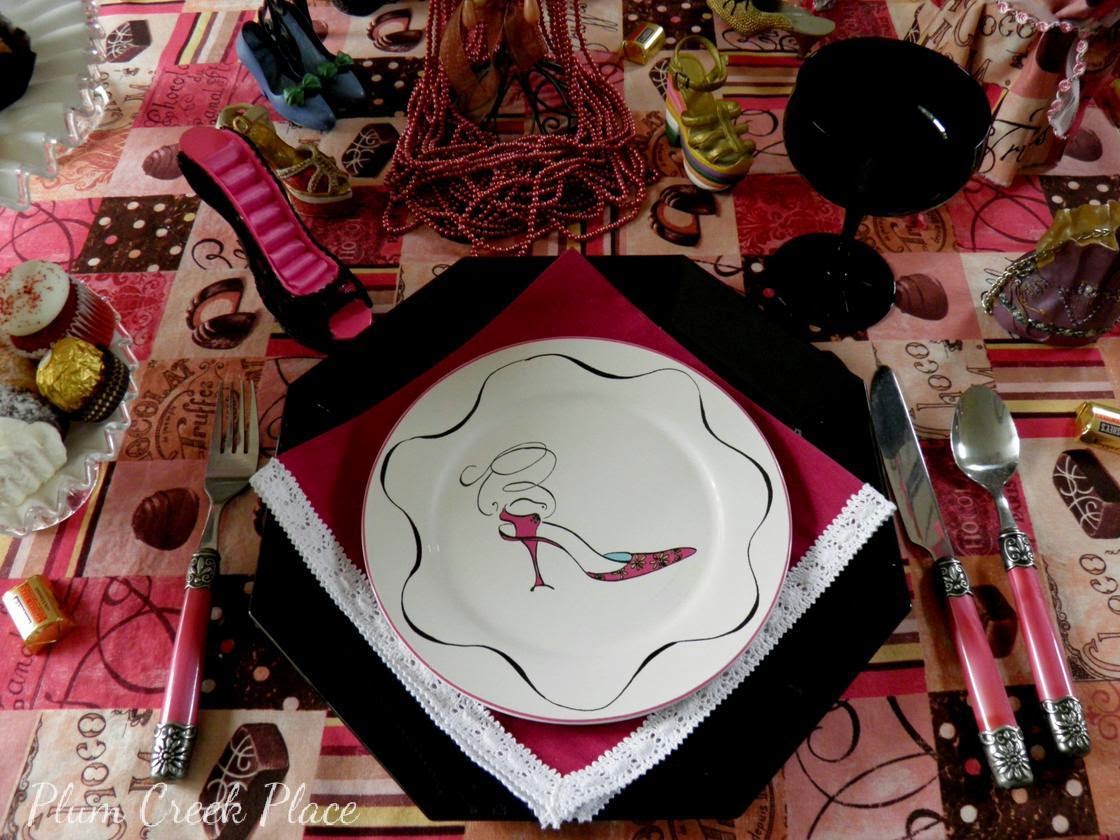 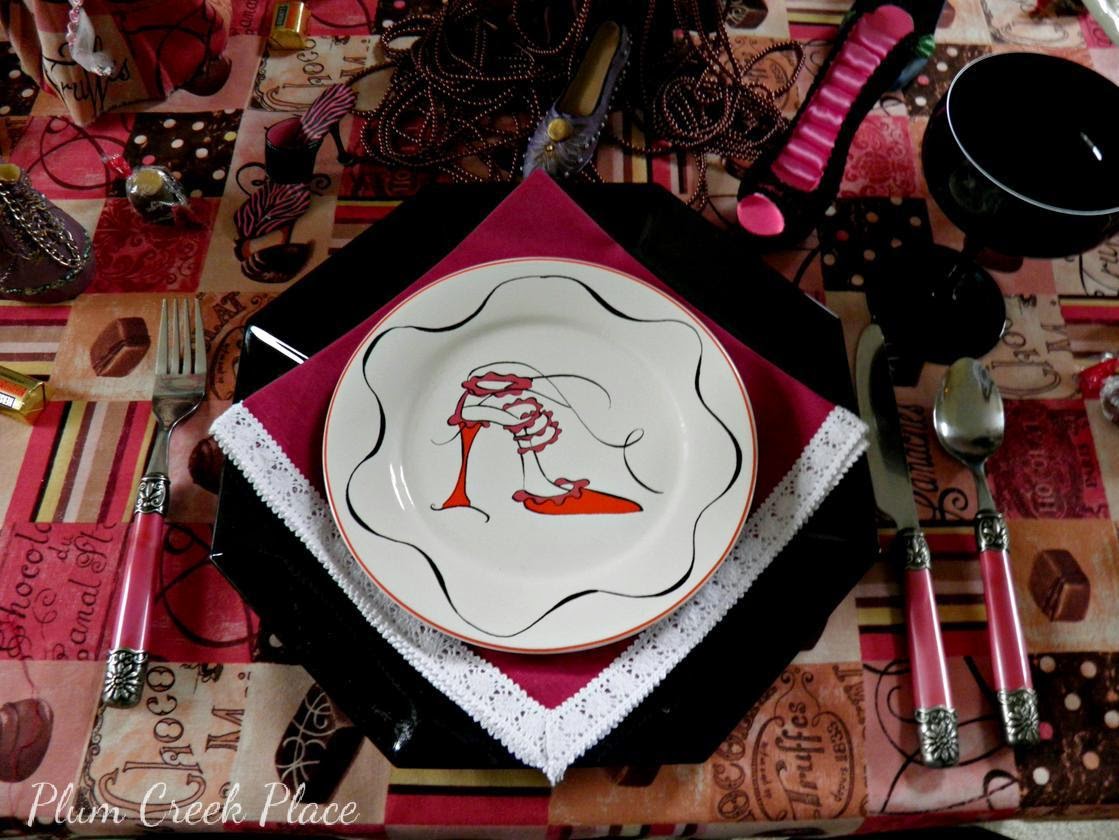 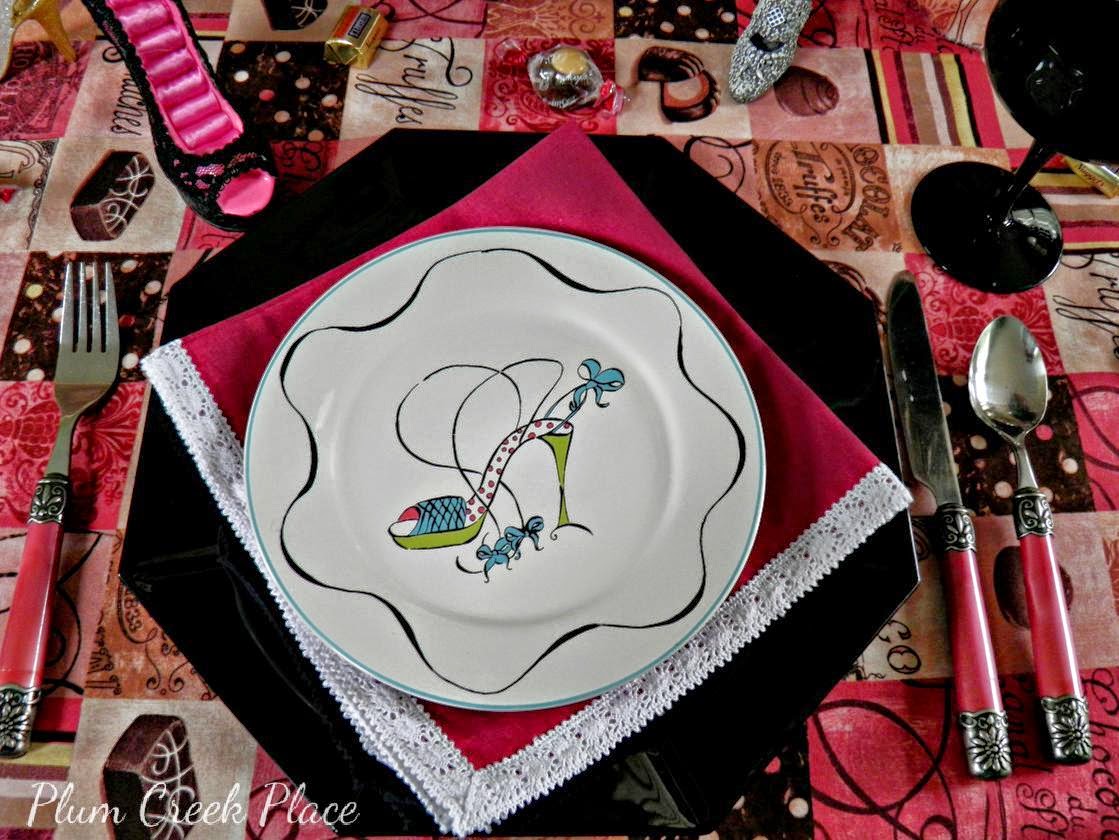 Mom and dad lived in North Carolina for twenty years during which time I had two more sons.  Mom would come to stay for several weeks when each child was born.  We would talk and talk until the wee hours of the morning. Every vacation I would pack up the kids and we would go to Grandma's house plus whatever occasion I could come up with.  The eight hour drive did not seem so long going down to see Mom, once there we always had an adventure or two and we went to mom's bingo games every week.  My favorite bingo games were at the VFW Hall with the veterans.  The ladies axillary would host about forty veterans from the VA Hospital,  one was a  lady who had served as a nurse and was said be the oldest living female veteran from World War One in North Carolina,  such a sweet lady she was and what an honor it was to meet her. The evening included a home cooked meal.  My mom always made the steak and gravy to take for these Bingo nights.  We would start cooking the steak around mid-day in her electric skillet, she would flower the steak and brown both sides and keep adding the steak to a roaster in the oven until about sixty or so pieces were ready to have homemade gravy added and slid back into the oven until they were tender.  Good times. 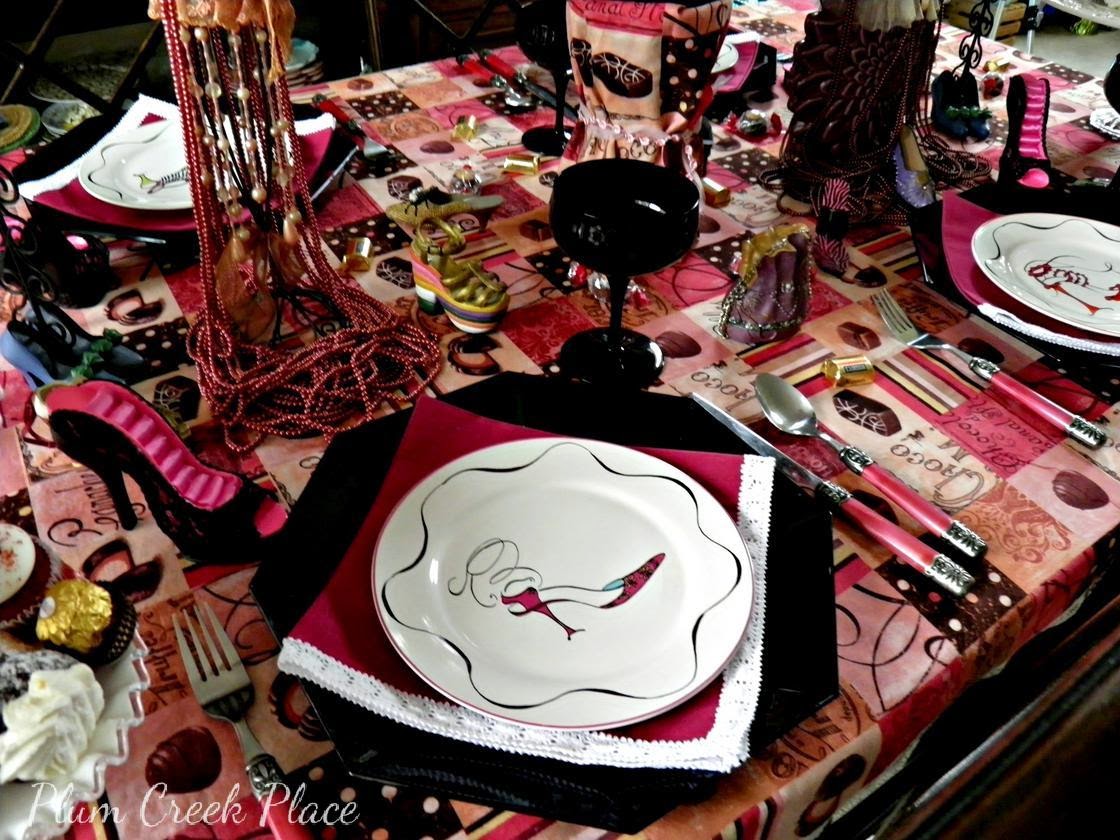 So Mom this one's for you!  I can't think of anyone that I would rather have a girls night out with,  we could shop till we drop and we can eat cake till we pop! There are no more worries about counting calories now.  How I wish you were here.