Today is Friday,  February 6th, 2015 and that means it is time to Par-Tay over at Laurie's along with her Co-Host the Queen of Hearts.  I thought I would tie in my totally thrifted/thrifty Valentine's Day Tablescape in with my Par-Tay table.  Virtually everything came from Goodwill, The Salvation Army Thrift Store,  The Volunteers of America, garage sales and darn near free odds and ends from Marc's Close Out Department.
I even got crafty for the occasion.  So join me as I show you how I created a really thrifty Valentines table plus a couple of variations to the centerpiece and the place settings. 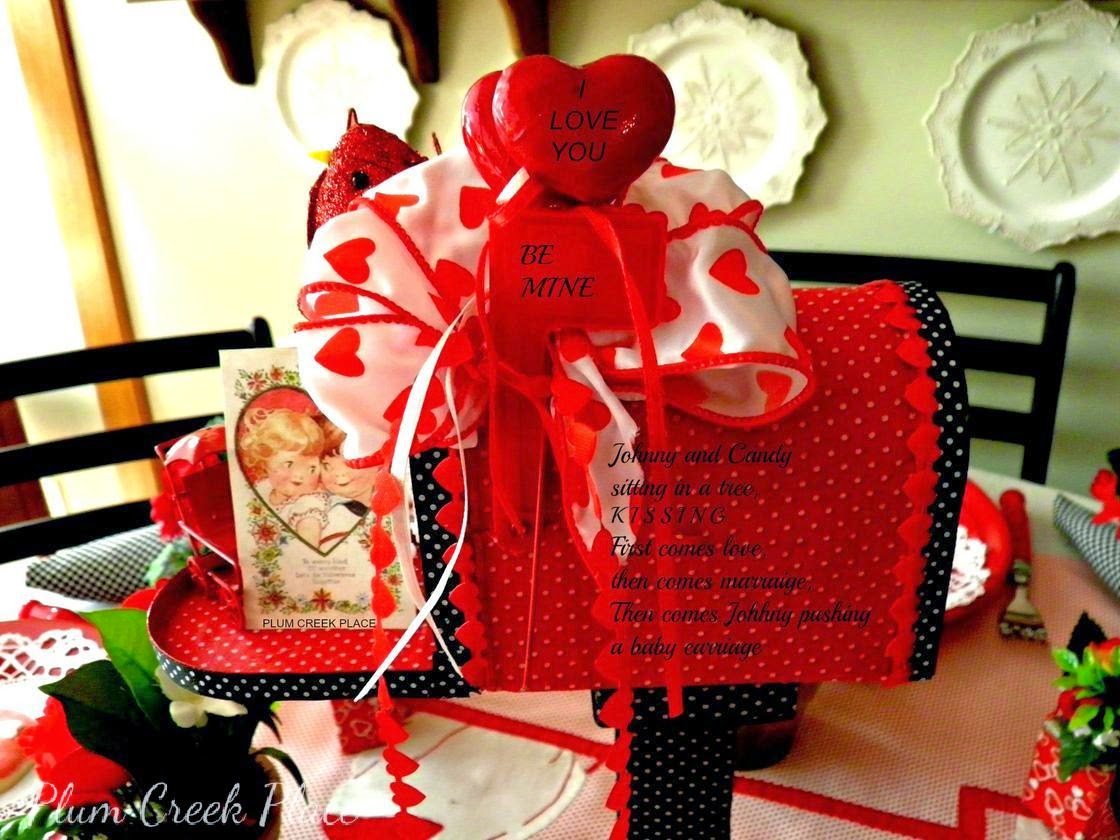 The first centerpiece is a Valentine's Day Letter box made from a plane red letter box like they sell at Target and craft stores.  A previous owner had fashioned a wooden stand for it from three pieces of wood. 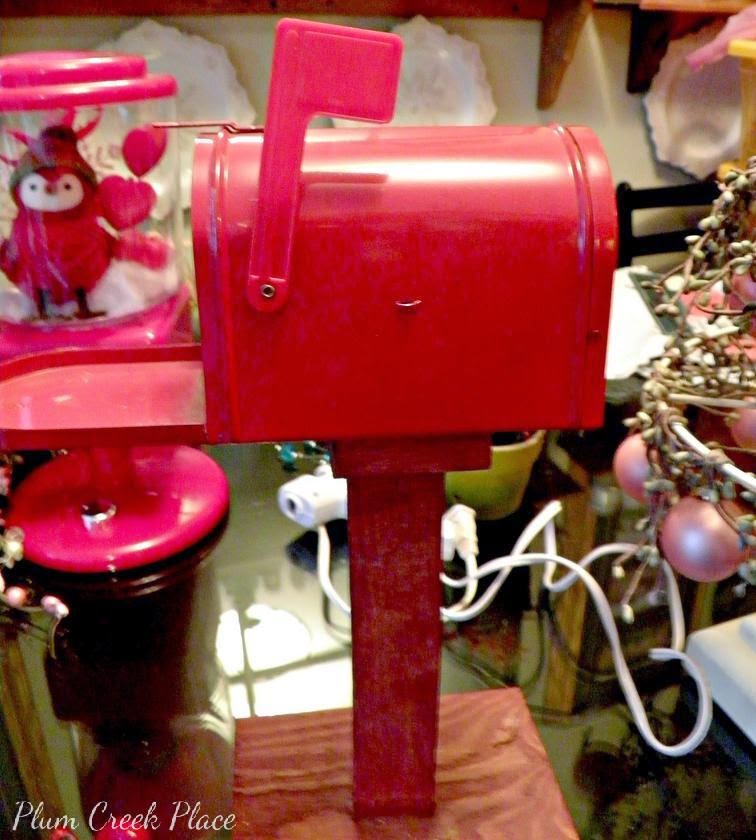 I used a product called The Photo Laminator to glue the materials to the mailbox.  Any tacky glue would work equally as well.  I started by thoroughly cleaning the box and stand and then cut up an old napkin that was stained to apply to the letter box.  After that I applied the trim pieces and bow.   Once the letter box was dry I cut the material to cover the wooden base from an old black and white polka dot napkin. Other pieces of trim were cut from some black and white polka dot ribbon that had been wrapped around ornament packaging  several years back.   The red heart ribbon came from marks at least 10 years or so ago.  The ribbon was priced at 2 rolls for 99 cents and each roll had 25 yards of ribbon.  I use it sparingly nowadays.  You may recognize the black plaid material on the base from the kitchen chairs that I recently recovered. 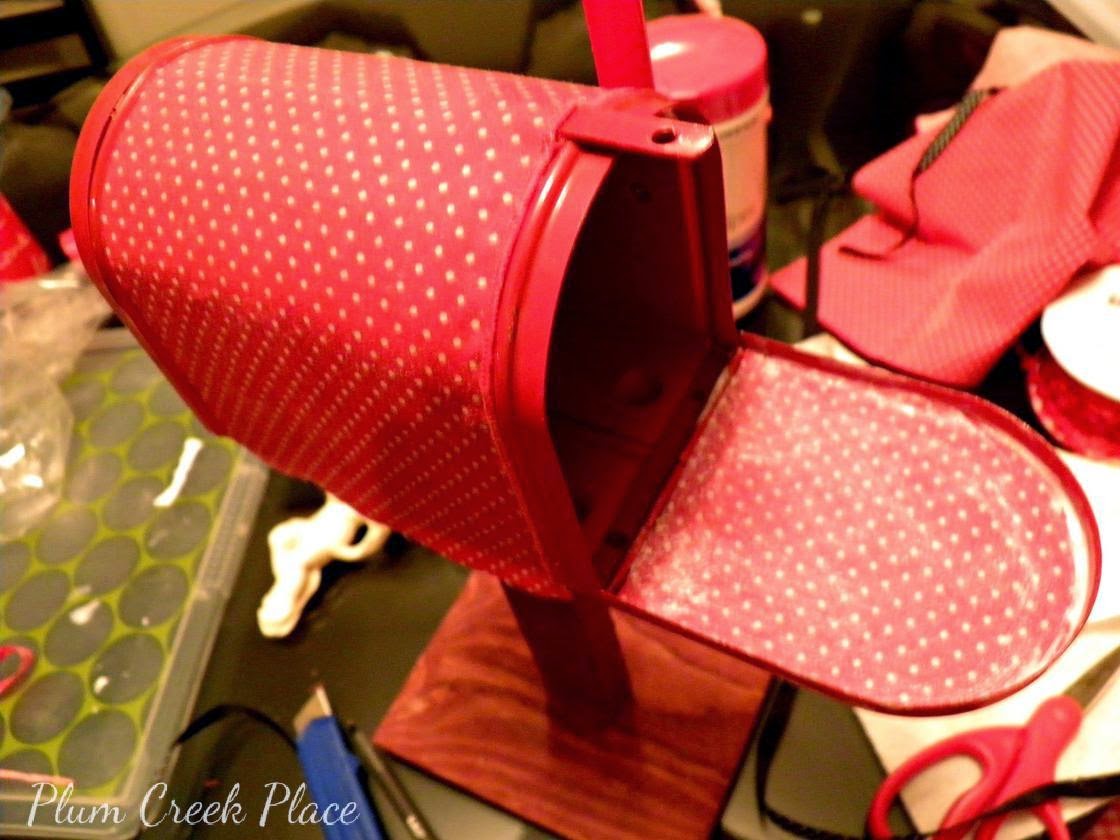 Notice the little red metal baby carriage on the open door of the letter box.  The little valentine was a download,  and the snowflake was left over from Christmas.  There is a small red Christmas bird ornament clipped to the top of the letter box where it closes.  You probably recognize the truck from my Christmas Village -> Copycat Tablescape .   The little flower pots came from Marc's,  they were originally priced at 99cents each.  Evidently they were slow movers and the new Easter merchandise was coming in so the pots were in baskets at the end of the isles and marked  "free" 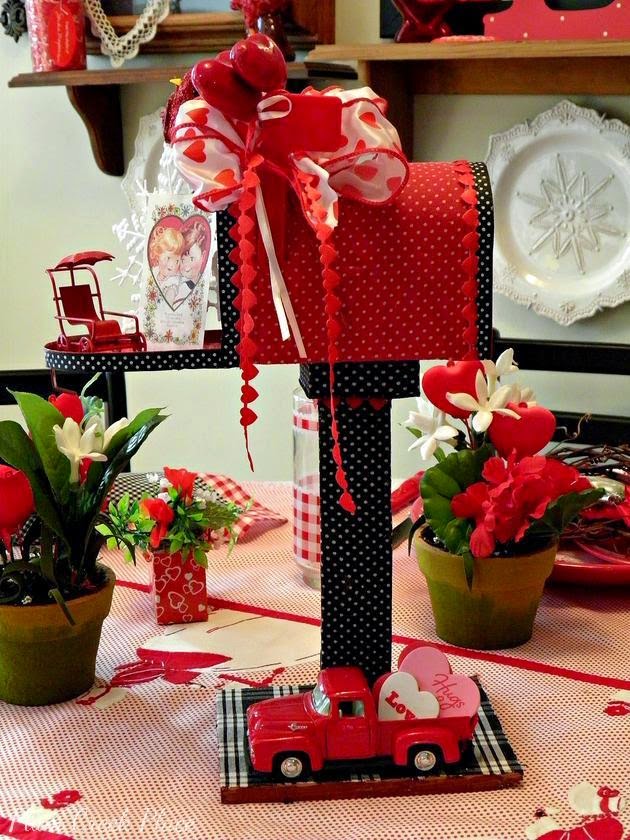 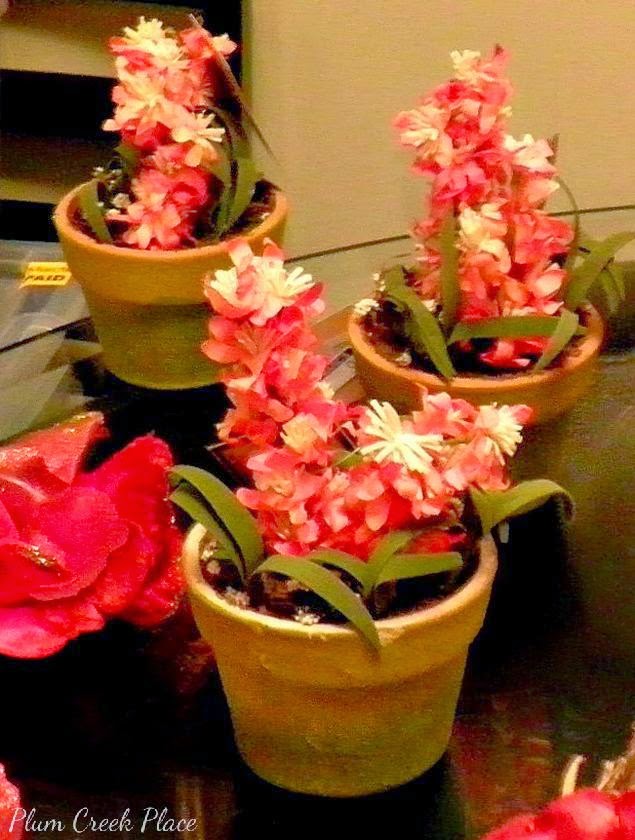 The free pots from Marc's had some wimpy salmon pink flowers in them which I replaced with red and white flowers plus a couple of hearts. 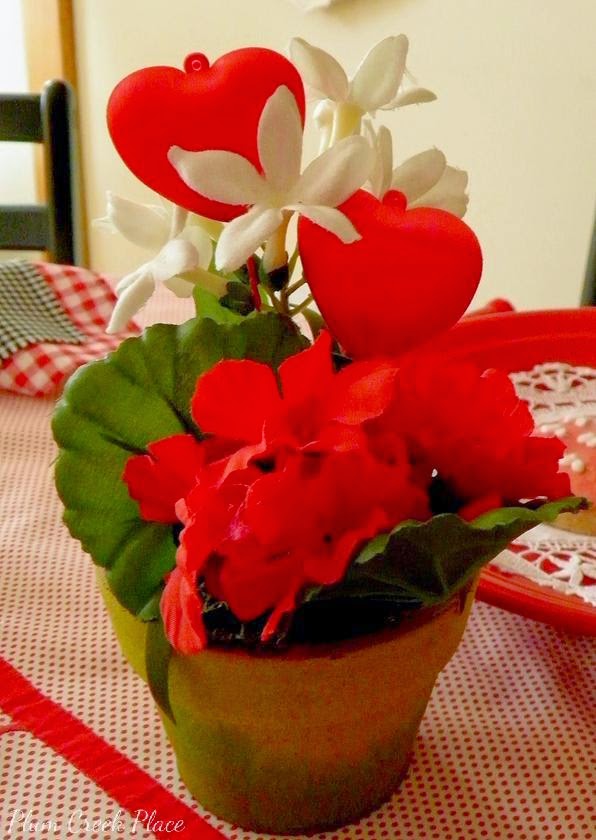 All items on this table were thrifted through the years. 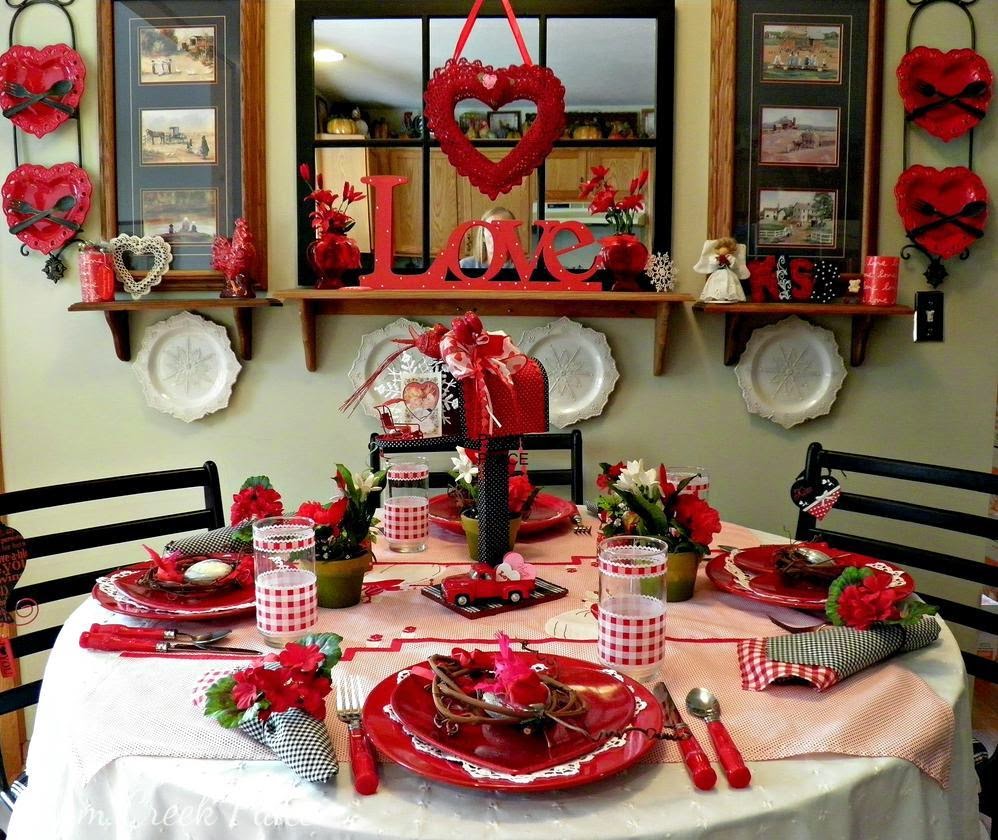 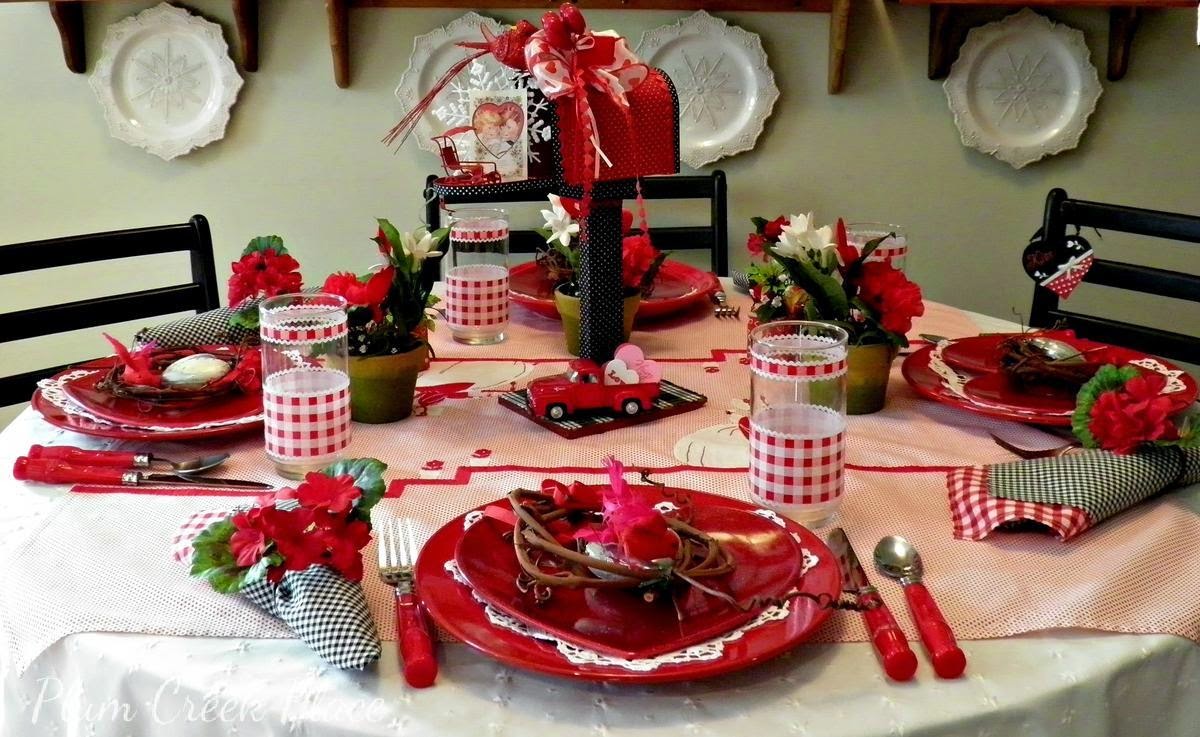 Keep in mind I always have my 10 percent senior discount,  and I almost always have a 20 percent off discount card for donating. I also get a 35% discount card after spending one hundred dollars.  Believe me - I use my discounts! 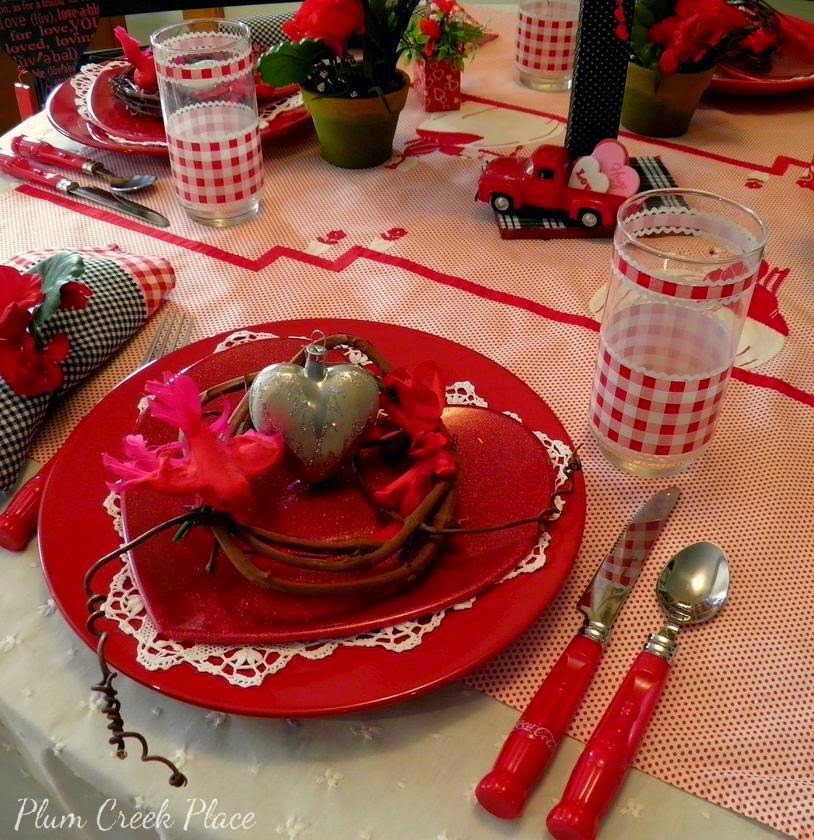 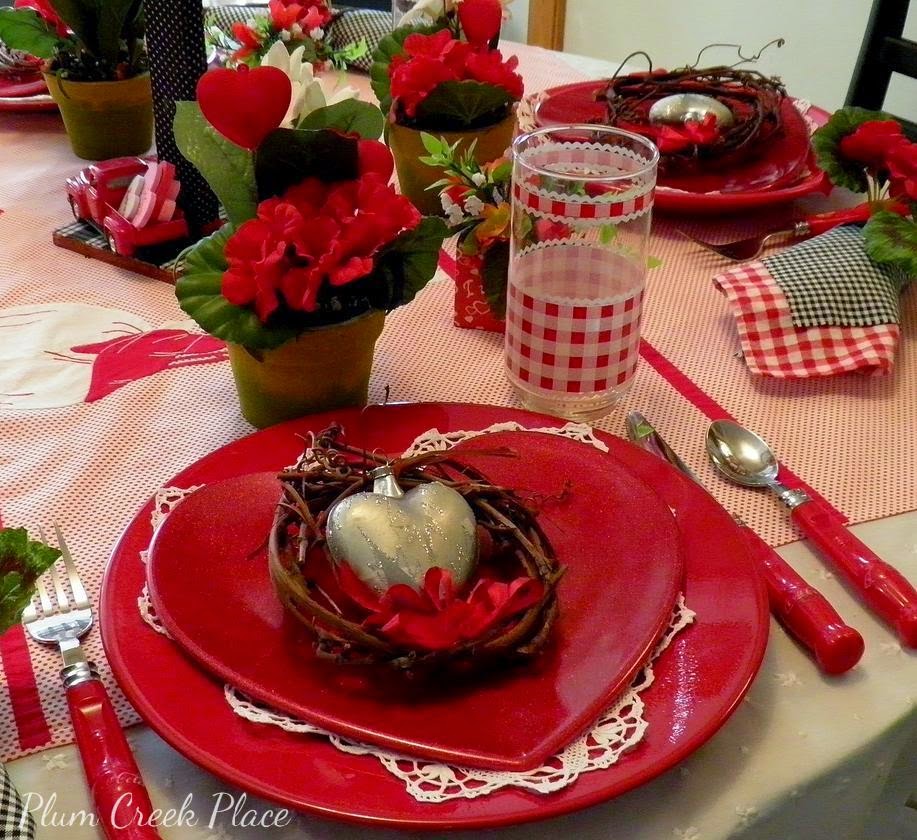 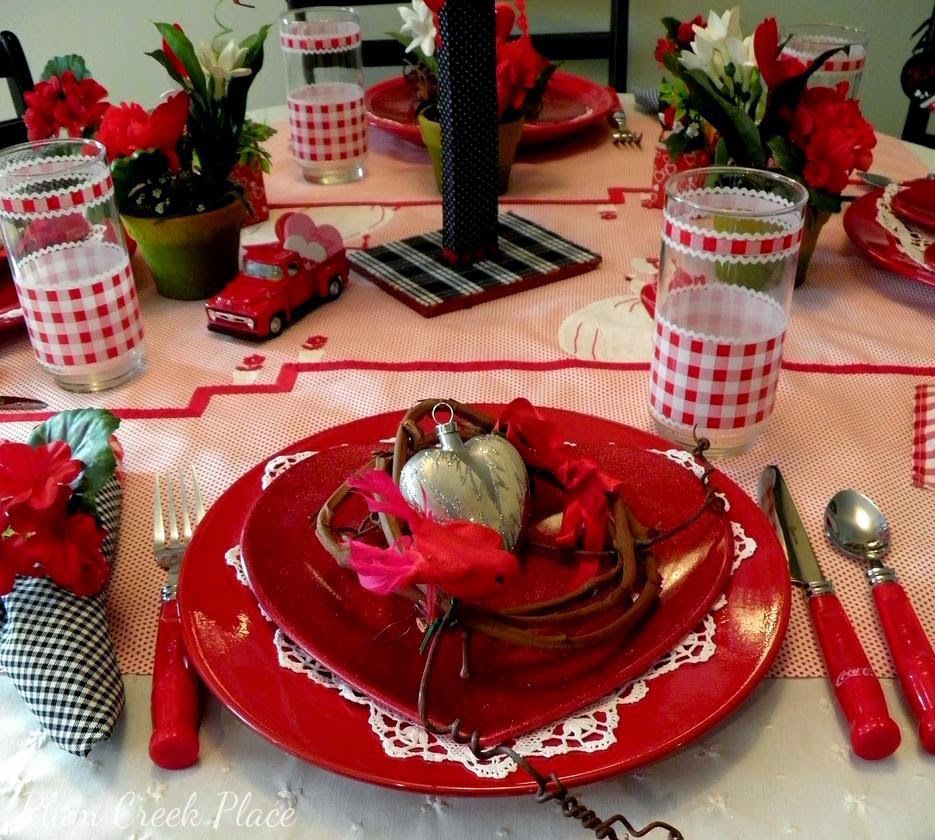 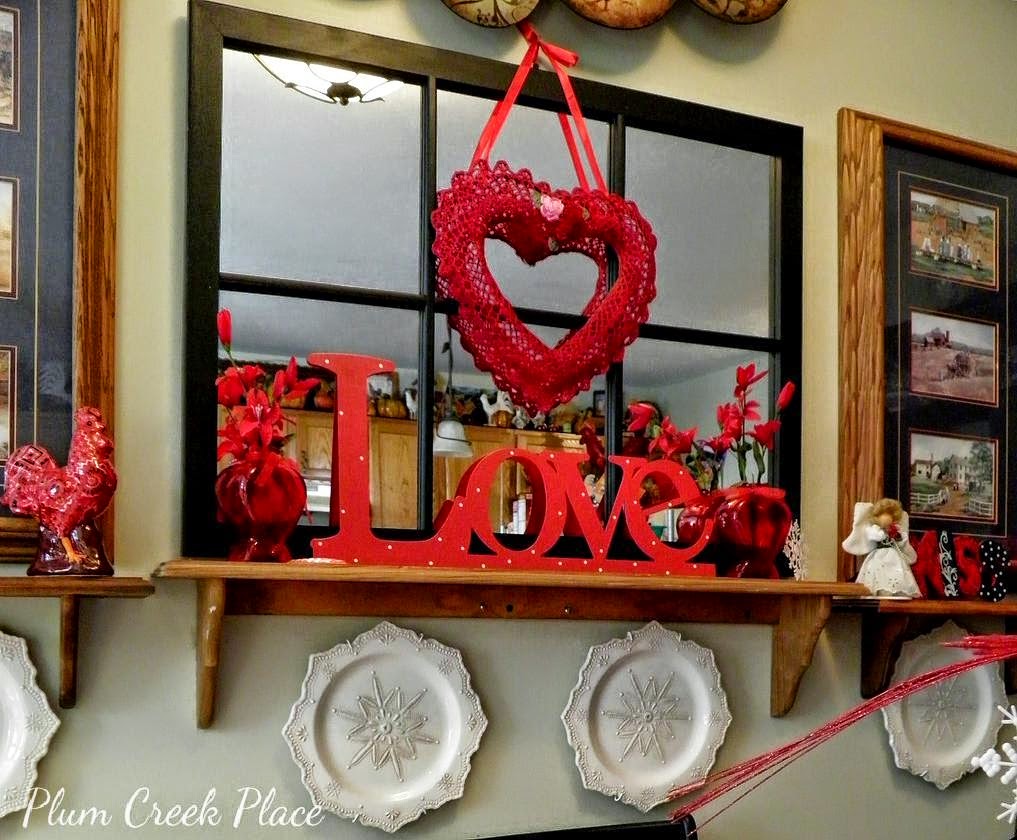 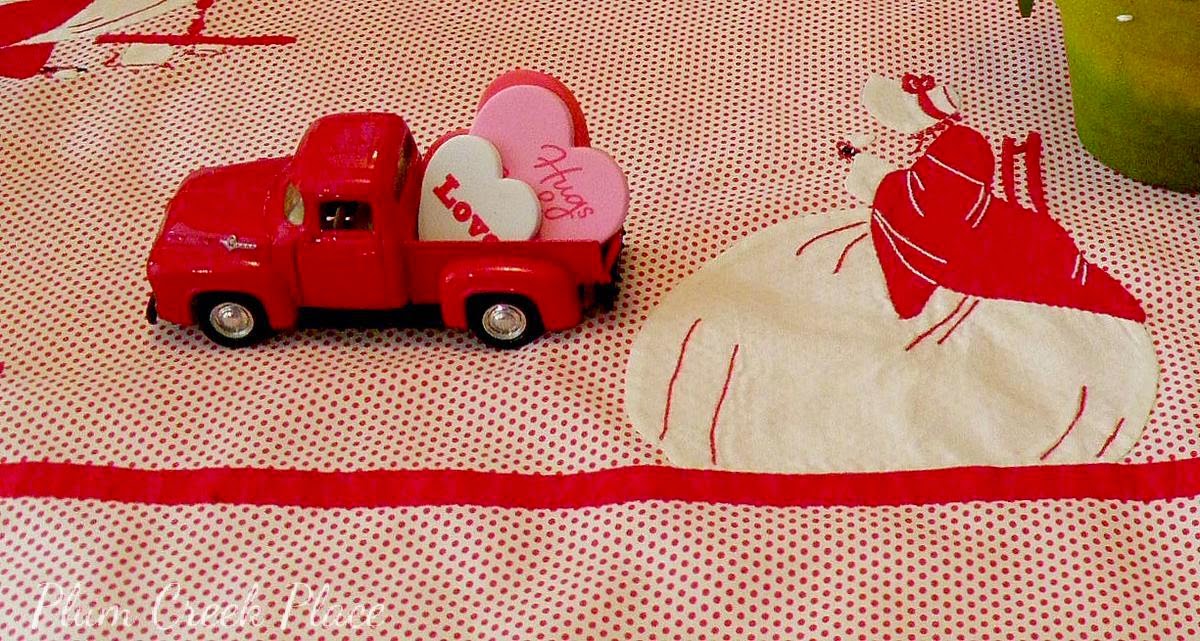 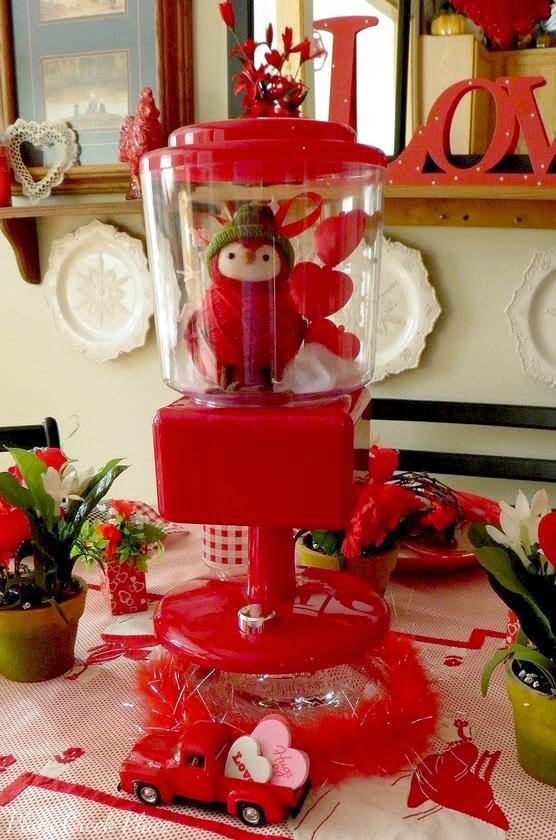 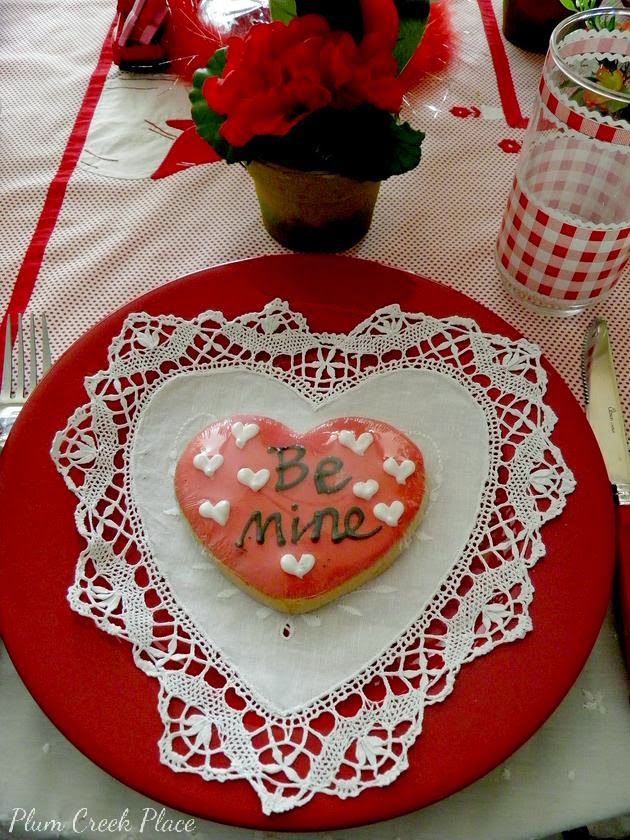 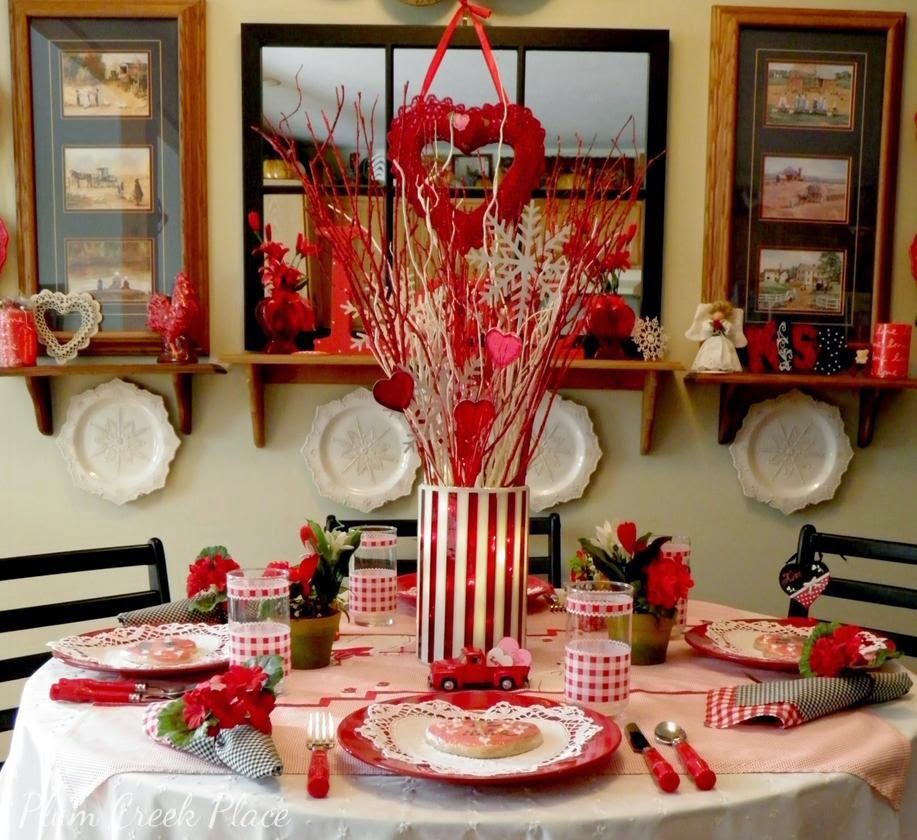 The red and white container in this alternate centerpiece was part of a three piece set from goodwill and is made from stained glass. 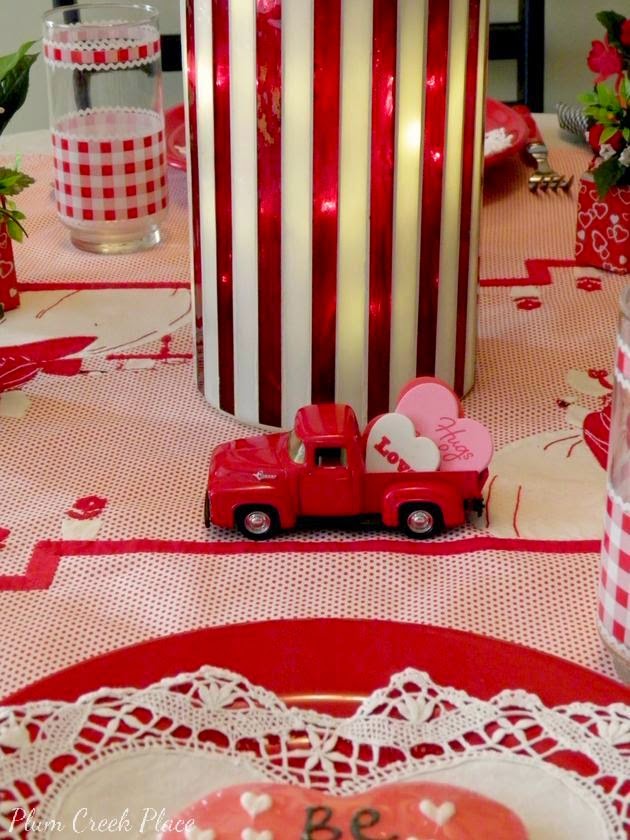 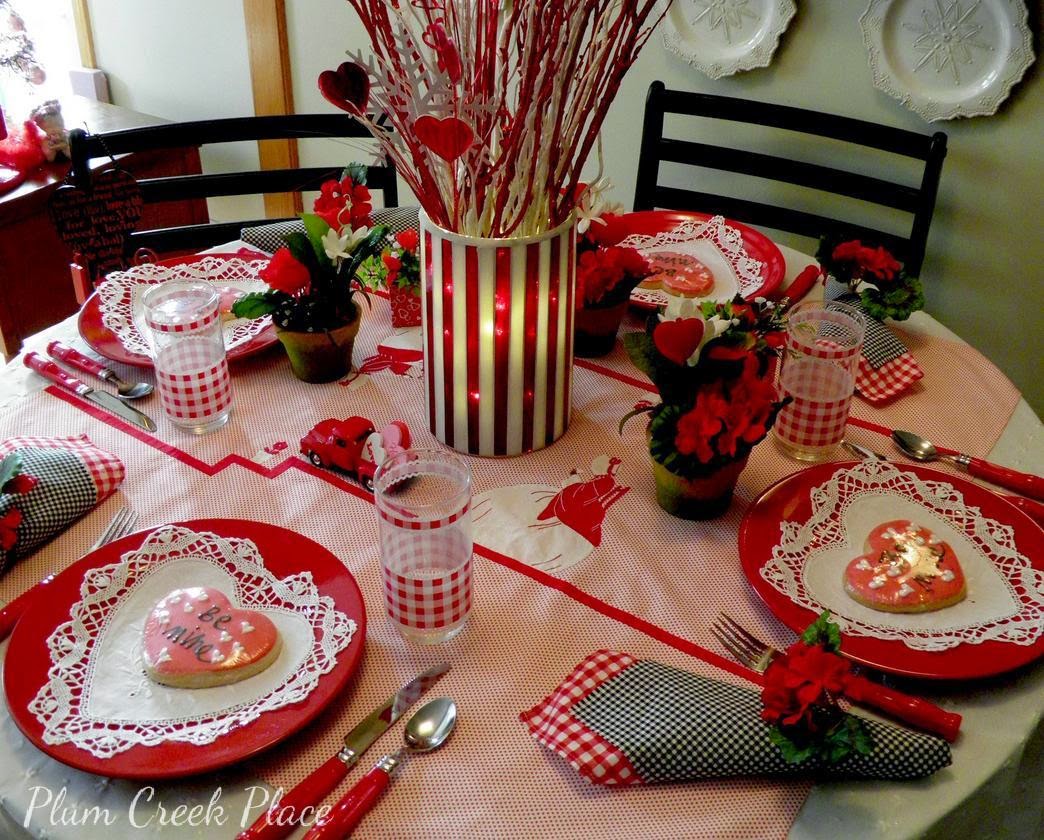 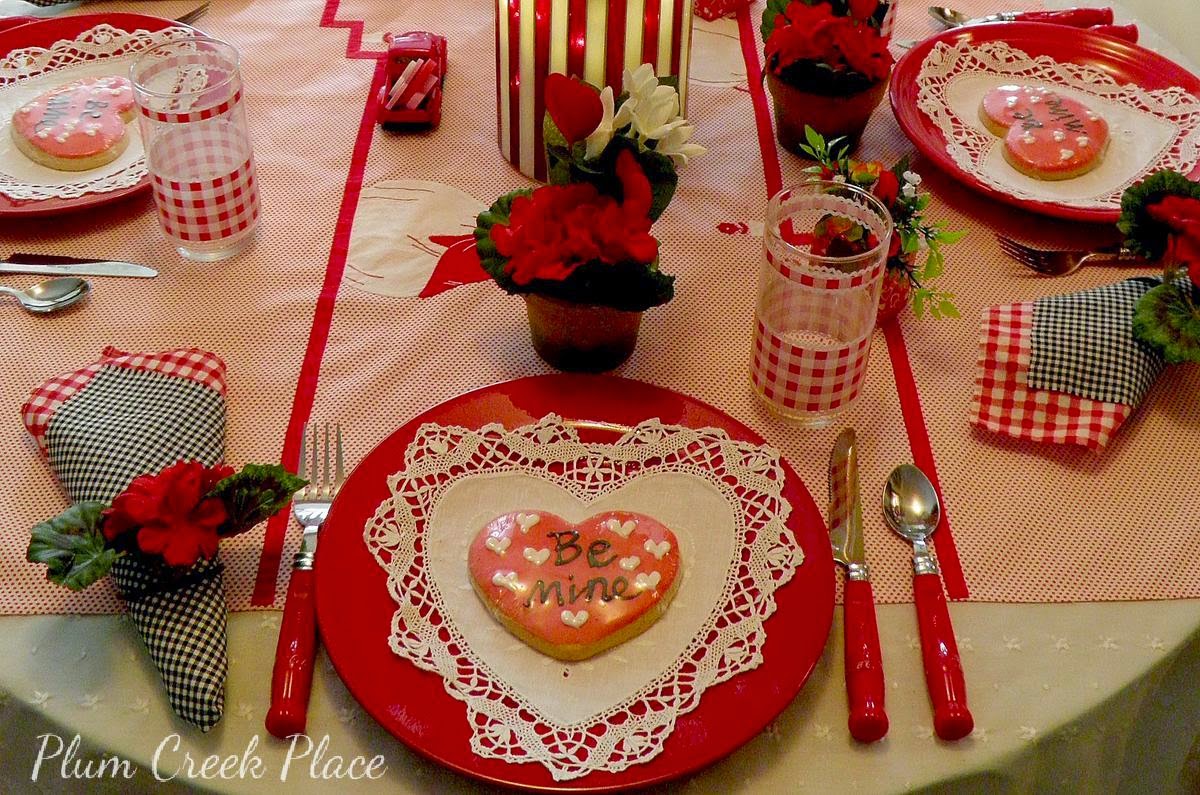 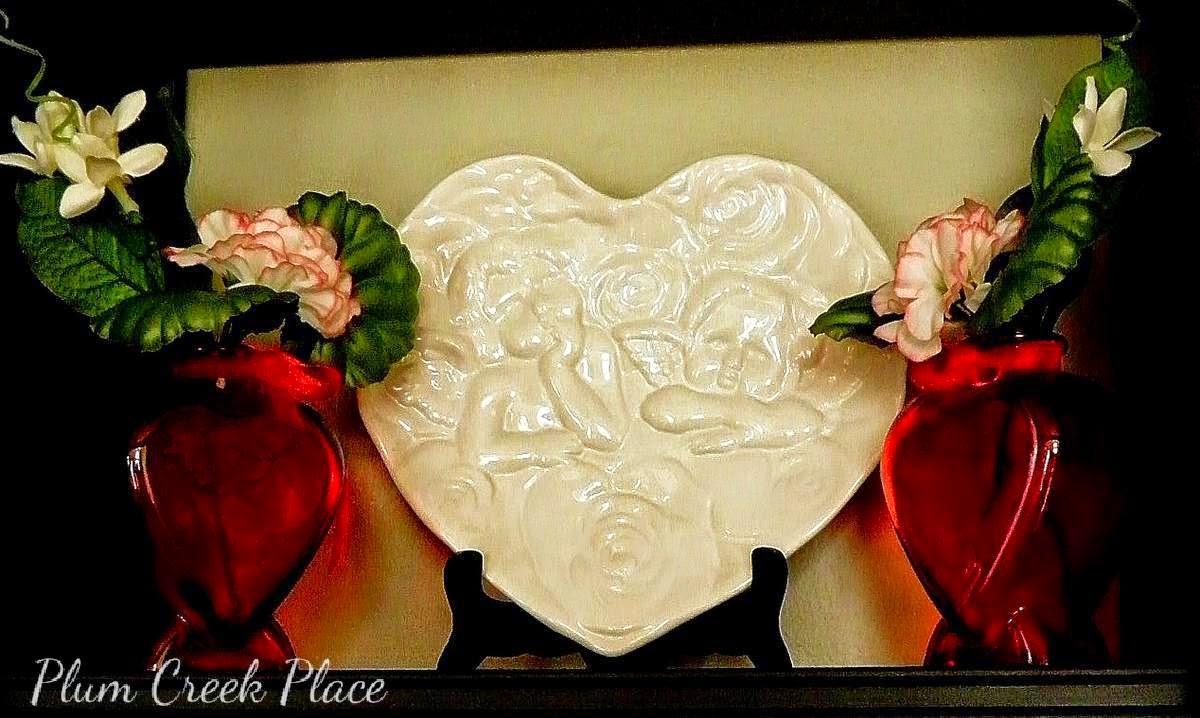 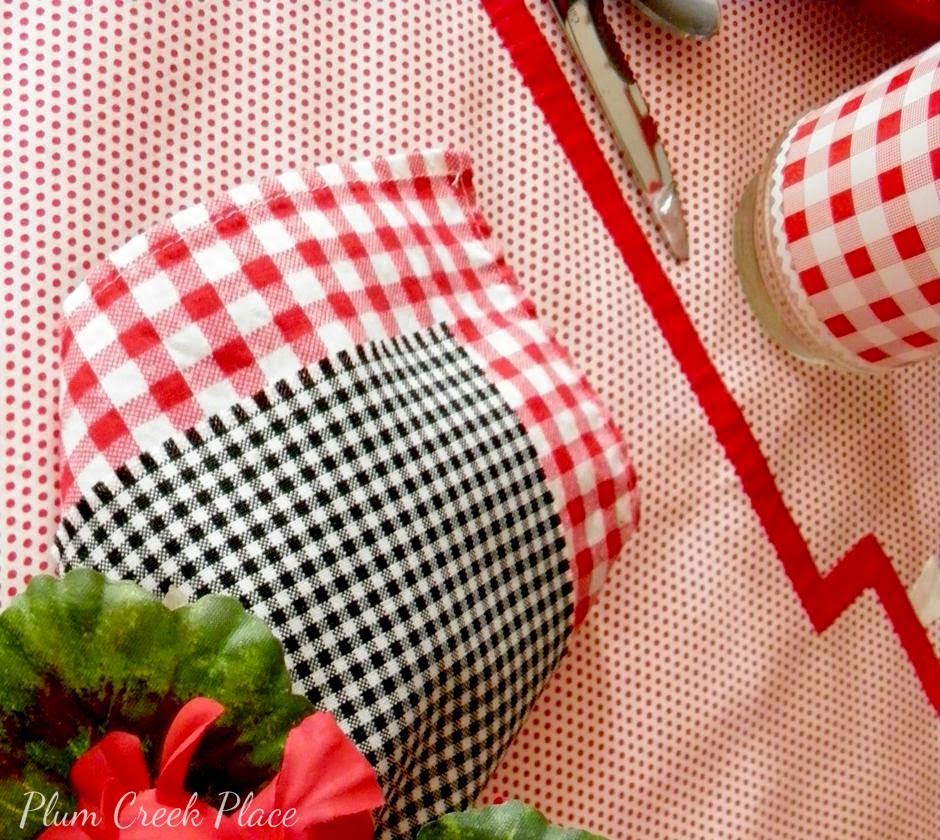 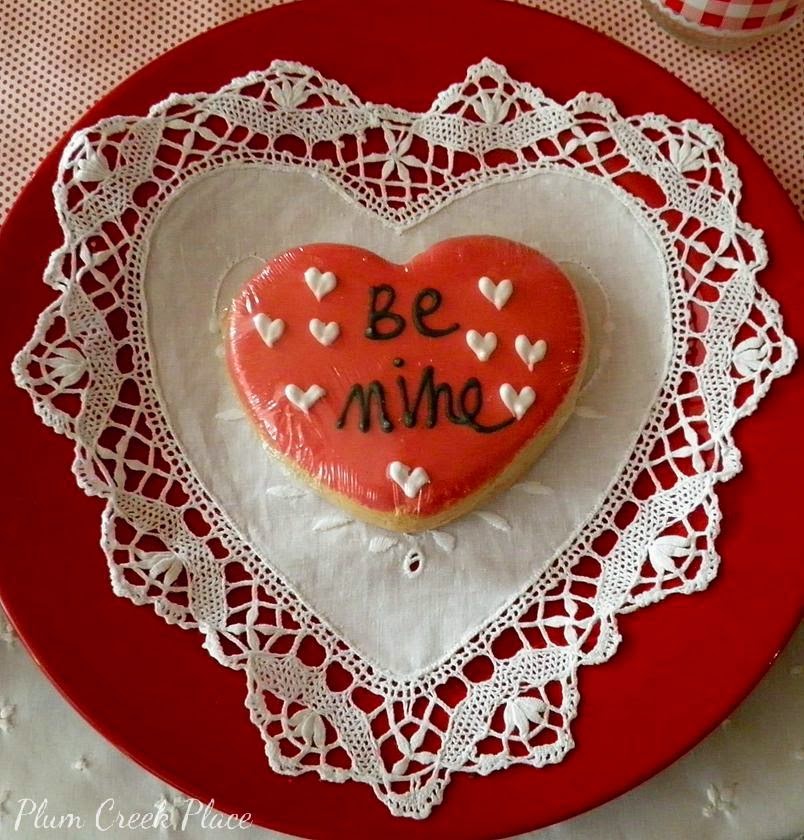 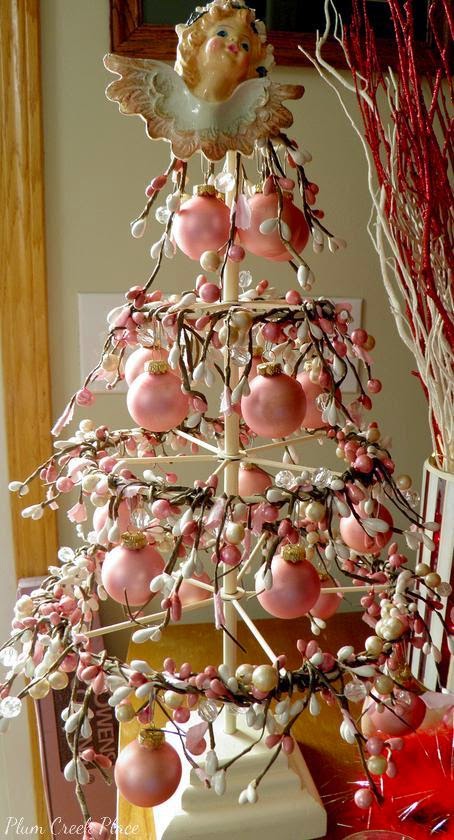 Have a wonderful weekend - And remember to thrift on ladies, thrift on.

The blizzard from earlier this week left one of the residents of the fairy castle stranded.  She was found perched precariously atop the snow laden trees calmly awaiting rescue after the storm let up. 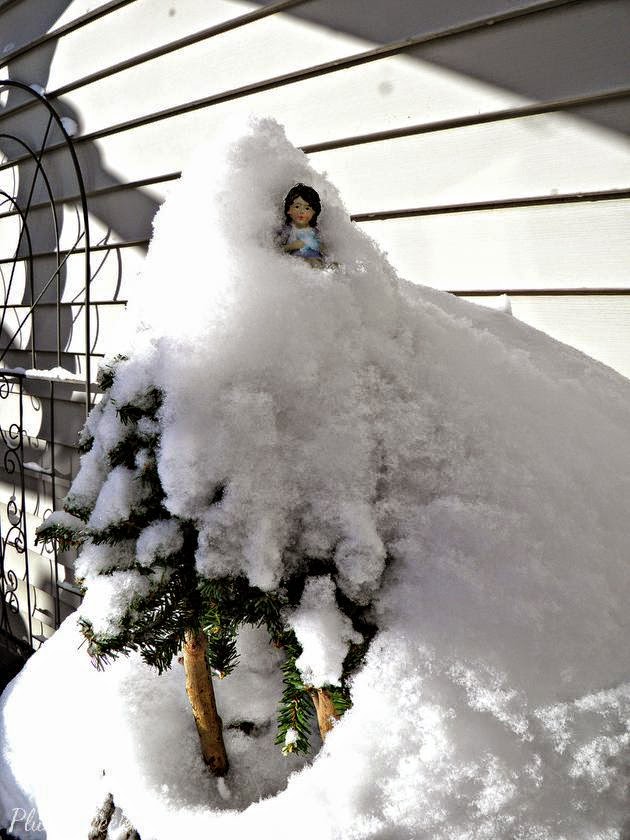 The other residents of the castle are assumed to be alive and well inside the castle.  It is thought that by April a rescue team will be able to plow out the snow and rescue them as well. 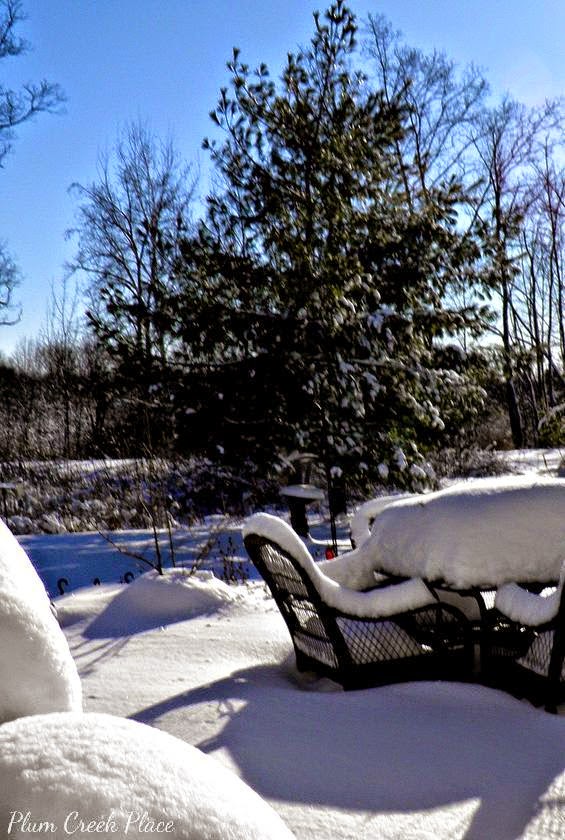 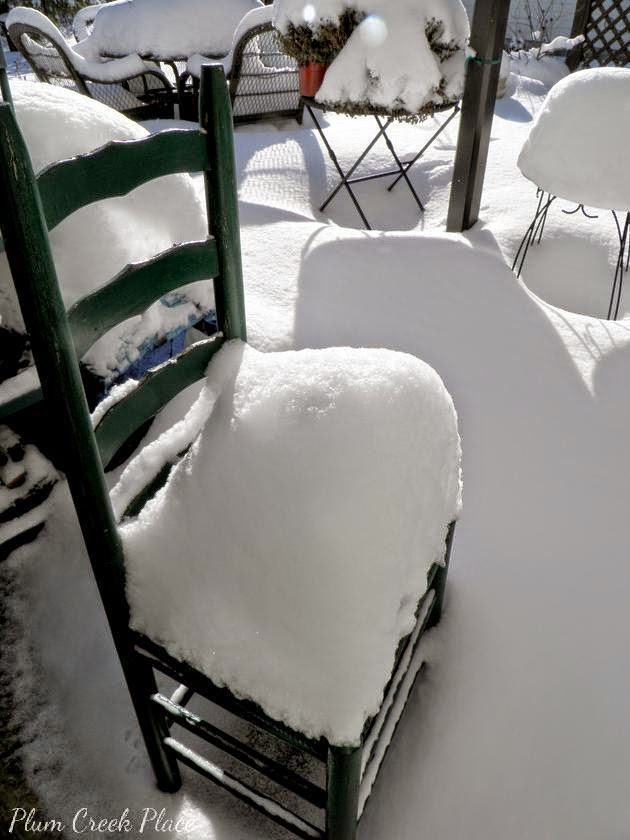