Sometimes there is a journey involved with creating a tablescape.  Somehow an idea sparks and the journey begins.  Maybe it was the colorful napkins I found several months ago when I was out thrifting.  The bright green napkin bordered in yellow and orange could have inspired any number of summer tablescapes. Or maybe it was the happy tropical looking Department 56 Mirage salad plates that I found a few weeks later, either way the search was on for all things tropical suitable for a tablescape.  Things just start to fall into place. 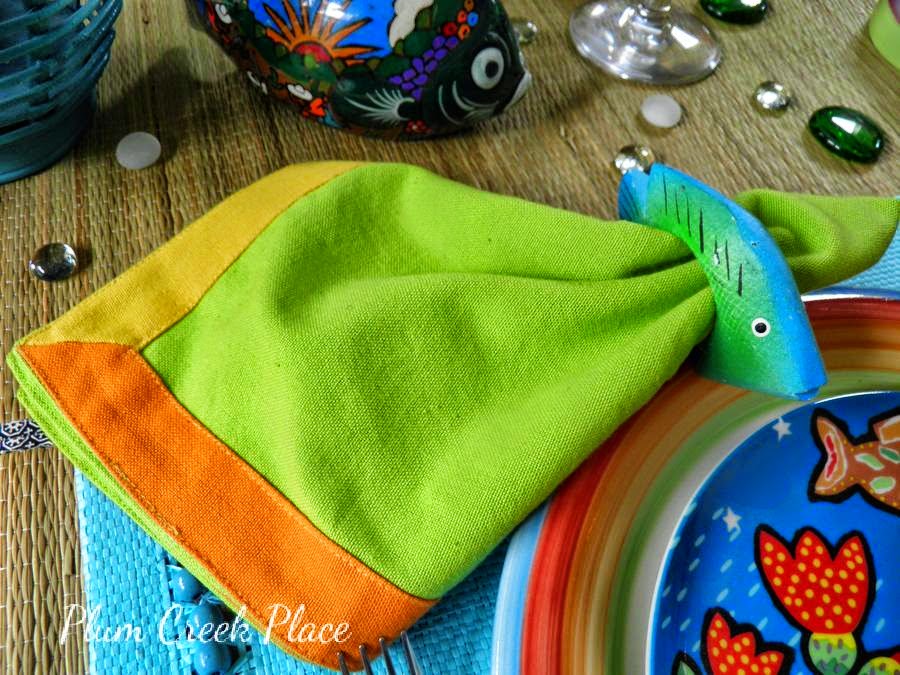 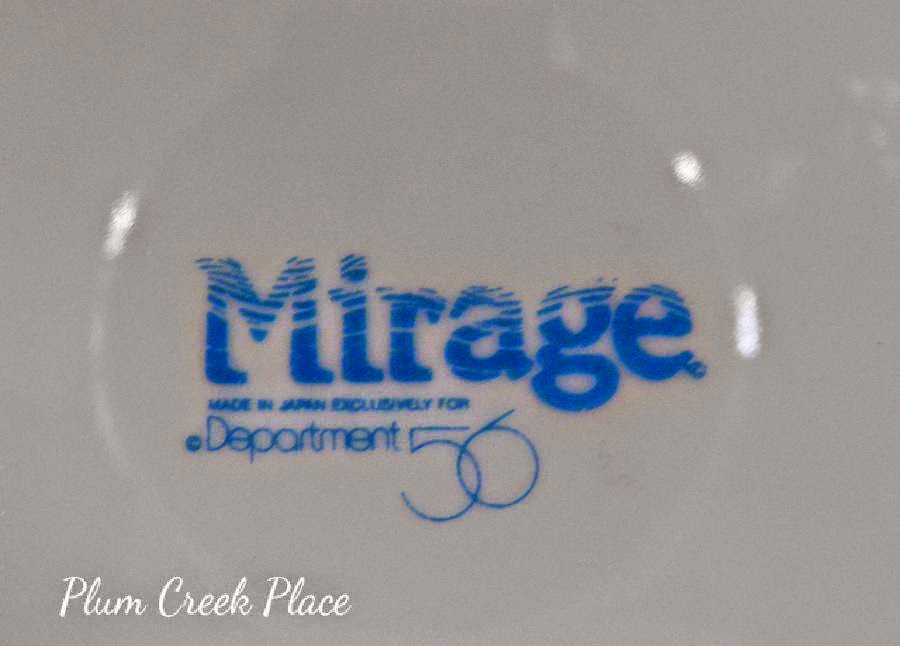 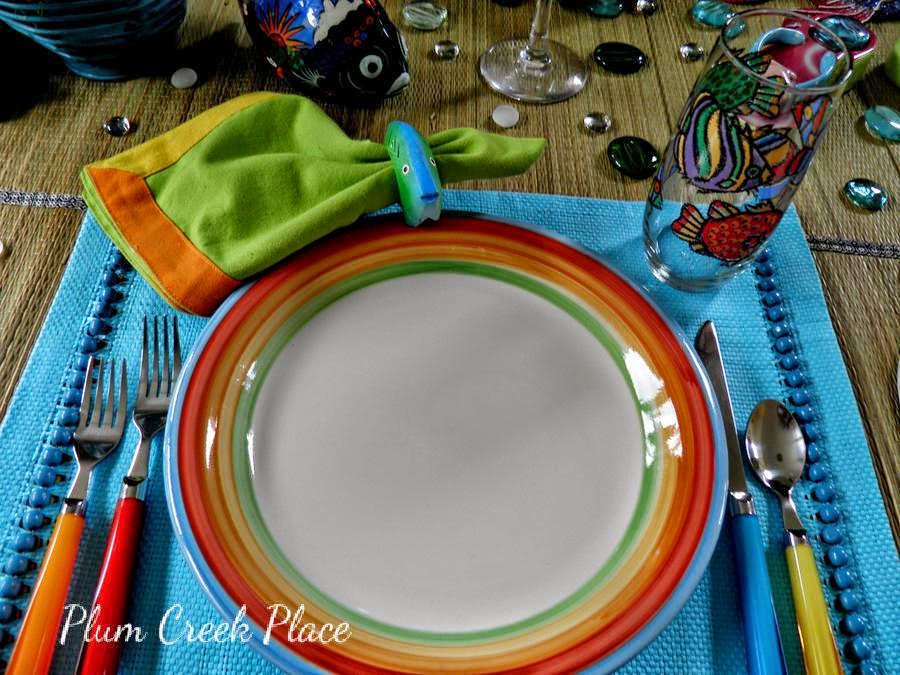 The colorful Gibson striped plates were already in my stash of summer plates waiting to be used for a happy colorful summer table. 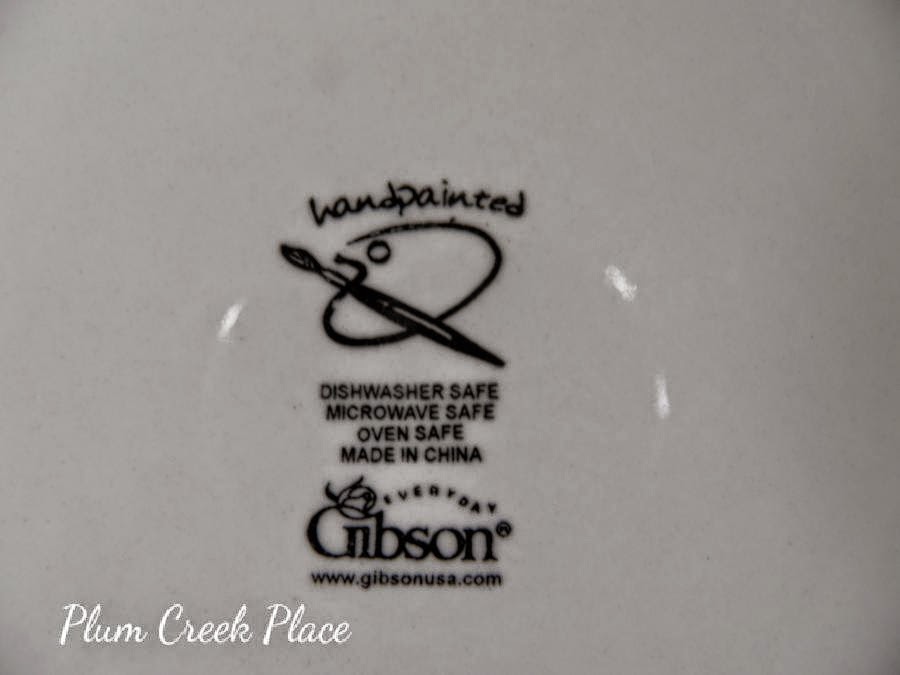 The tropical fish tumblers managed to jump into my cart at the VOA a week or so later. 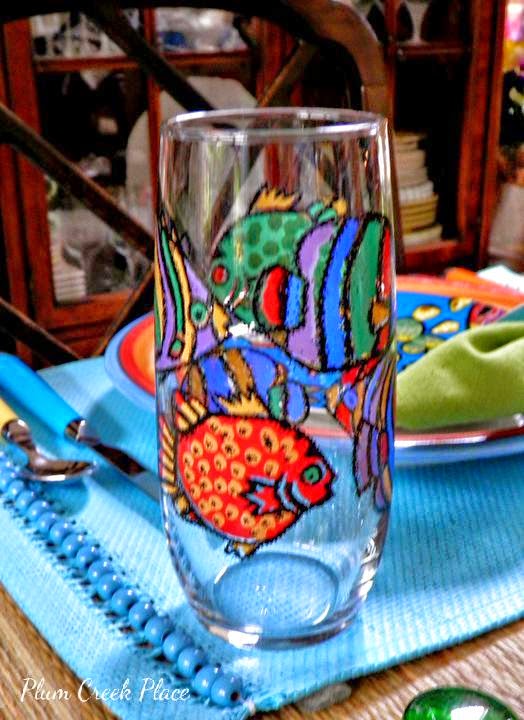 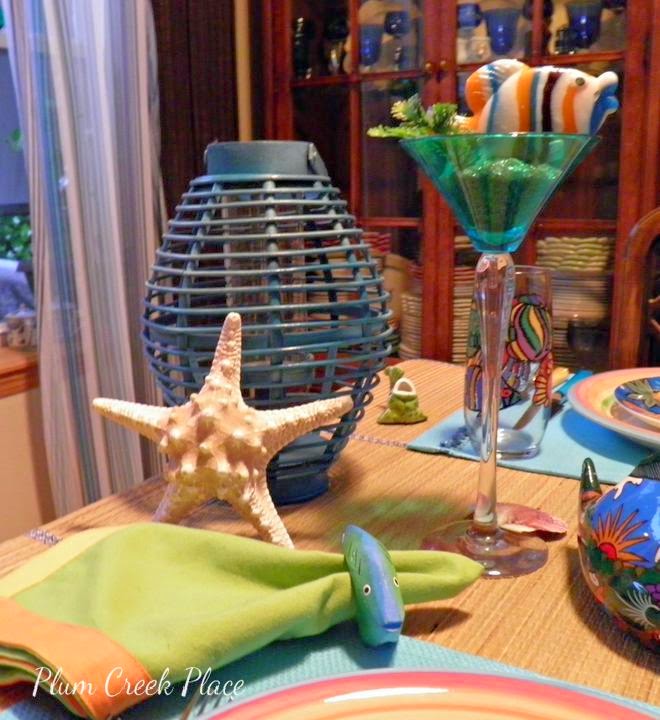 Various tropical fish and seashells seemed to be everywhere over the last week or two. 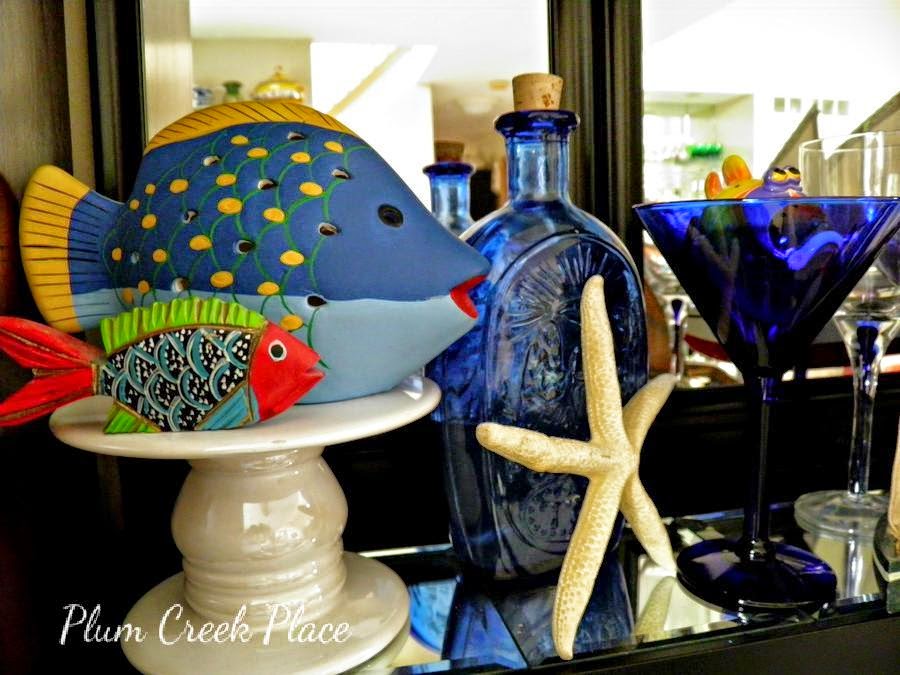 A pelican even managed to hop into the shopping cart even though I kept telling him that I was making a tropical fish tablescape NOT a beach tablescape.  He didn't listen. 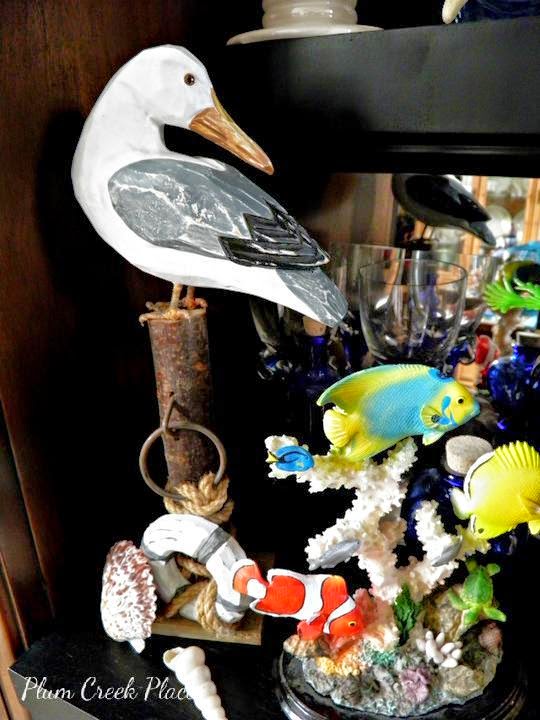 I even made a "mock" aquarium out of an old rectangular vase that I had in my stash of vases.  I was going to use this aquarium as a centerpiece before I found the flip-flops. 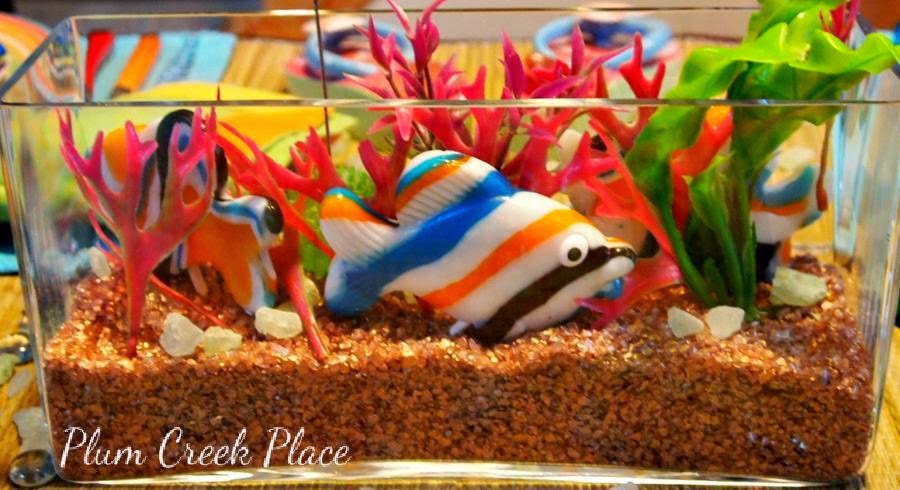 There were tropical fish suckers at the Deals Dollar Store with colorful stripes that looked perfect in my mock tropical aquarium.  Even the "new in a sealed package" aquarium plants showed up on the shelf at the Goodwill Store last week. Darned if they didn't hope into my cart too!  Along with the cute little pair of flip-flop votive candle holders. 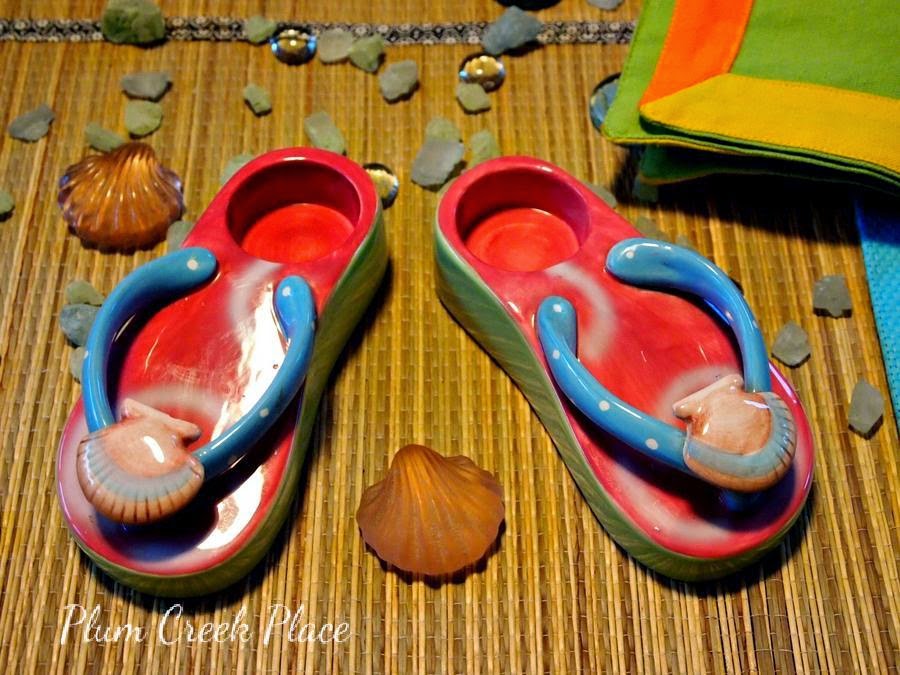 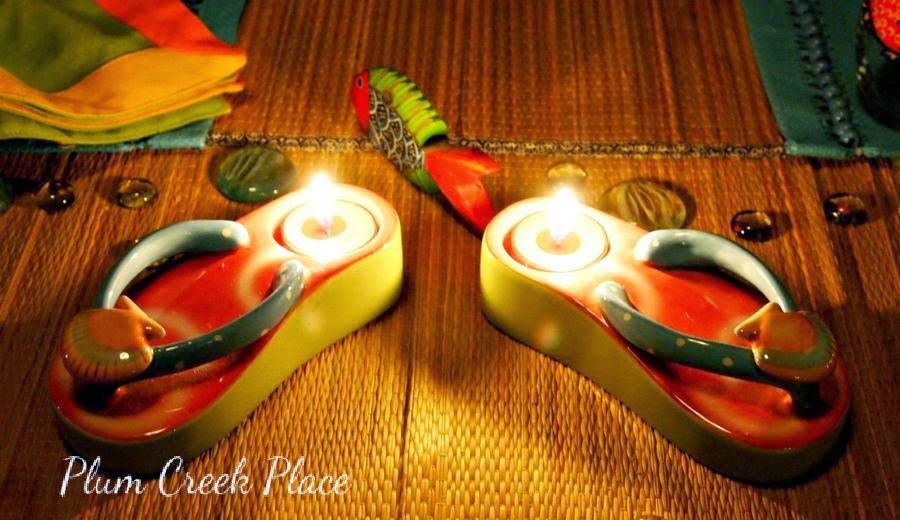 Little things that had been packed in storage boxes have been brought out to brighten the summer decor in the windows.  It was good to see these old friends again. 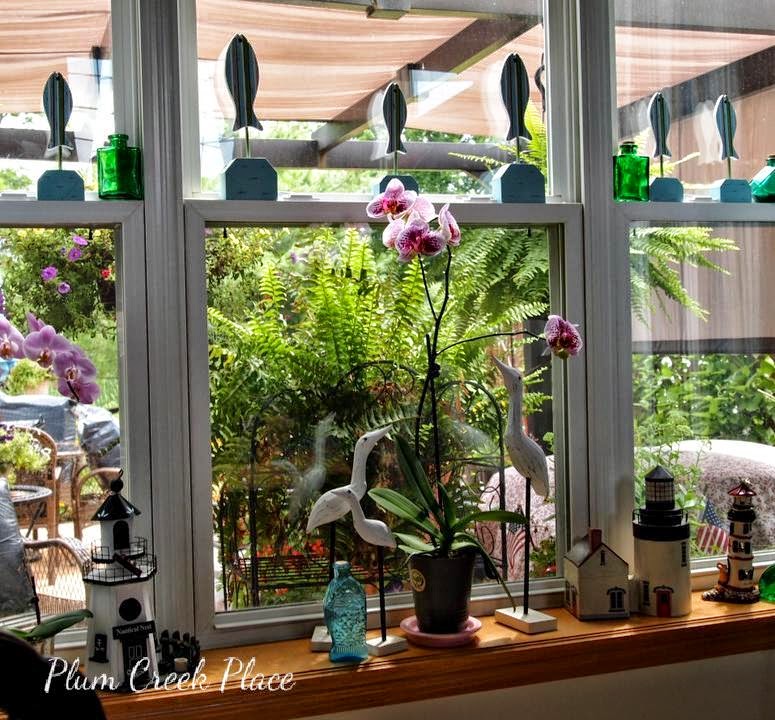 In the end the tablescape evolved into the table pictured below. 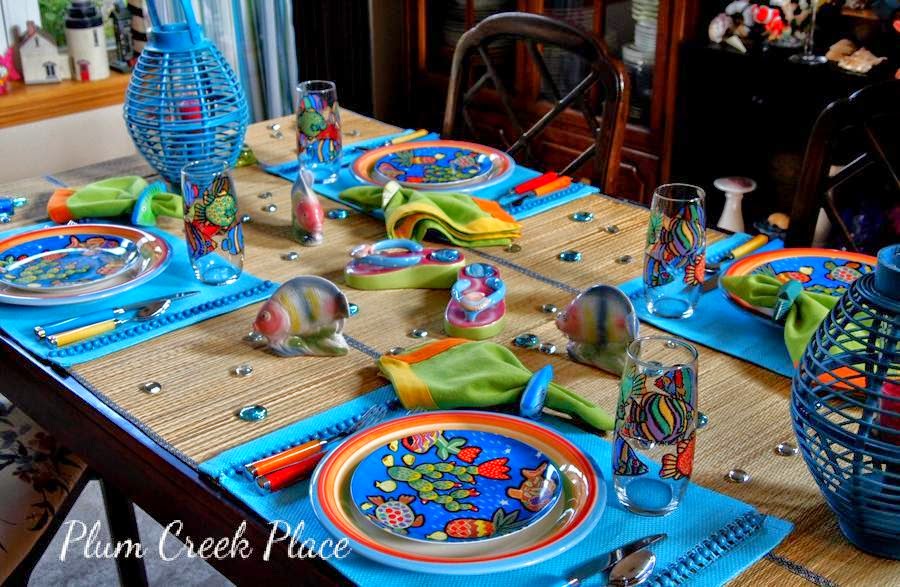 The flatware was purchased new from the HomeGoods store for $12.99 for the 20 piece set with a silverware caddy. 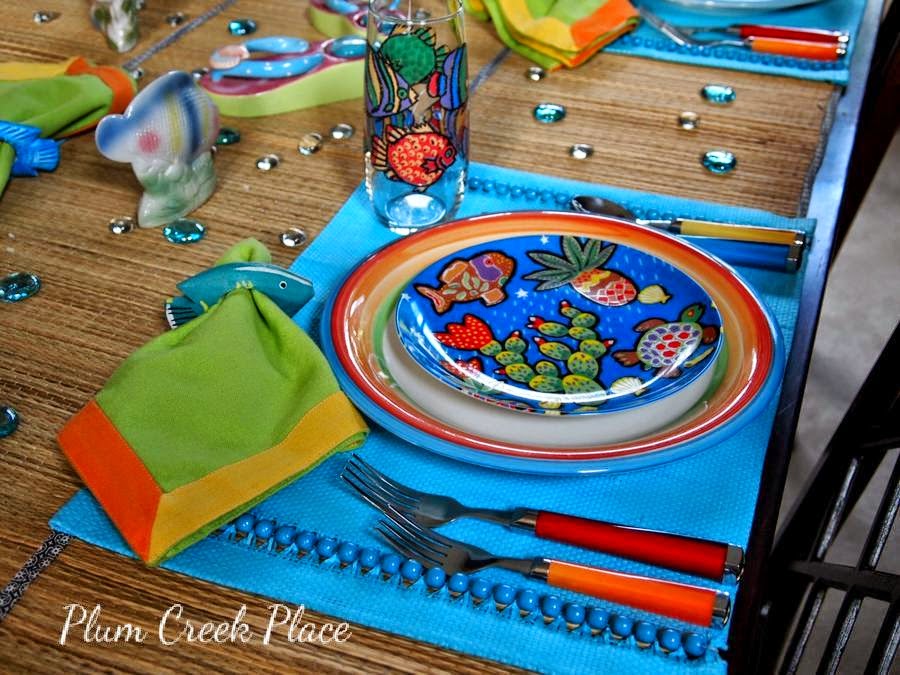 The place mats are a thrift store find as are the dinner plates,  salad plates,  glasses,  and napkins. 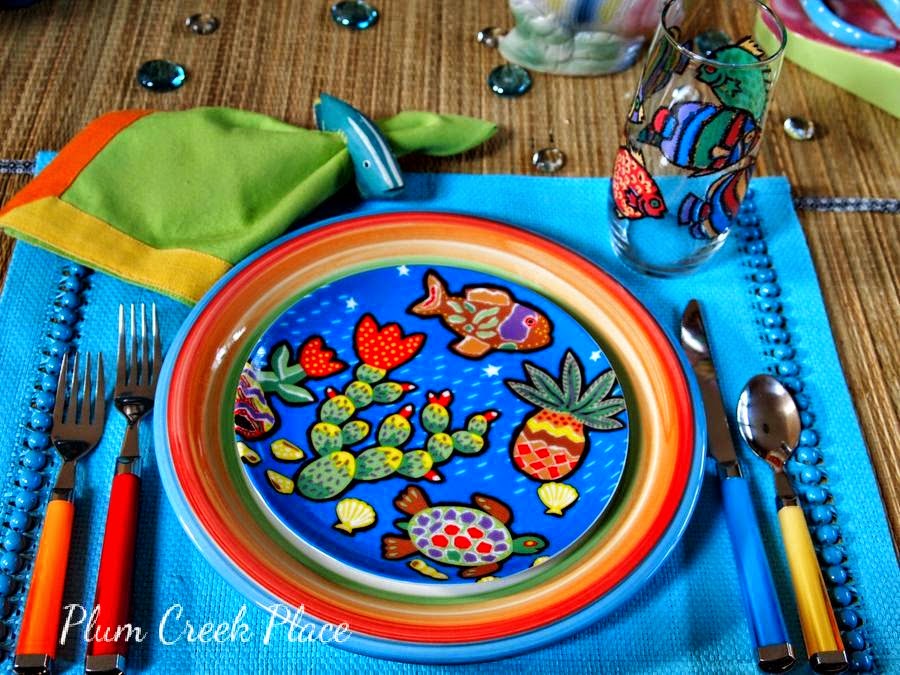 The lanterns and table scatter came from Marc's.  The lanterns were a beachy white color that I painted  turquoise several years back. 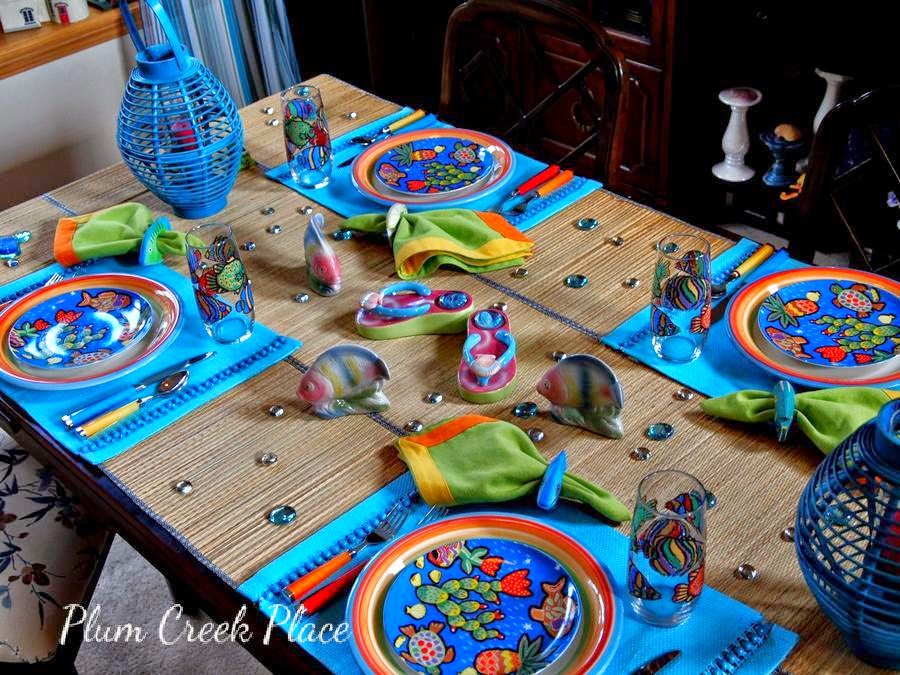 The table cover is a beach mat that was bought at Big Lots at 90% off many years ago. It fit the table perfectly! 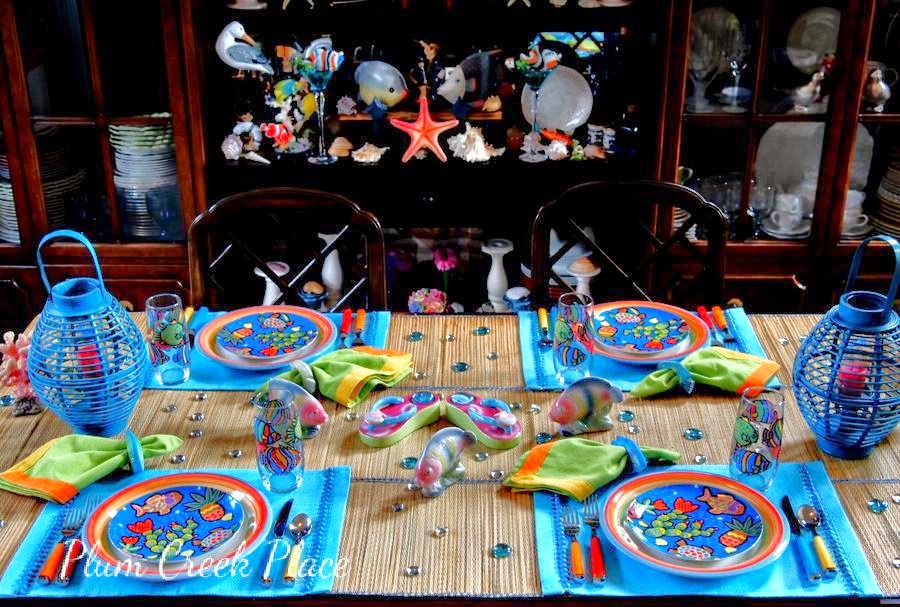 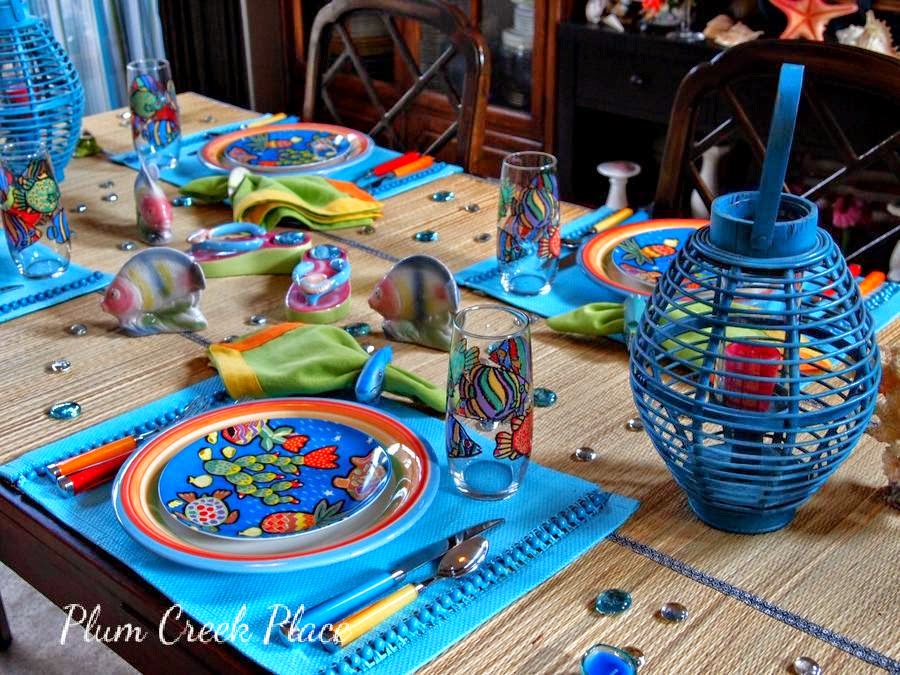 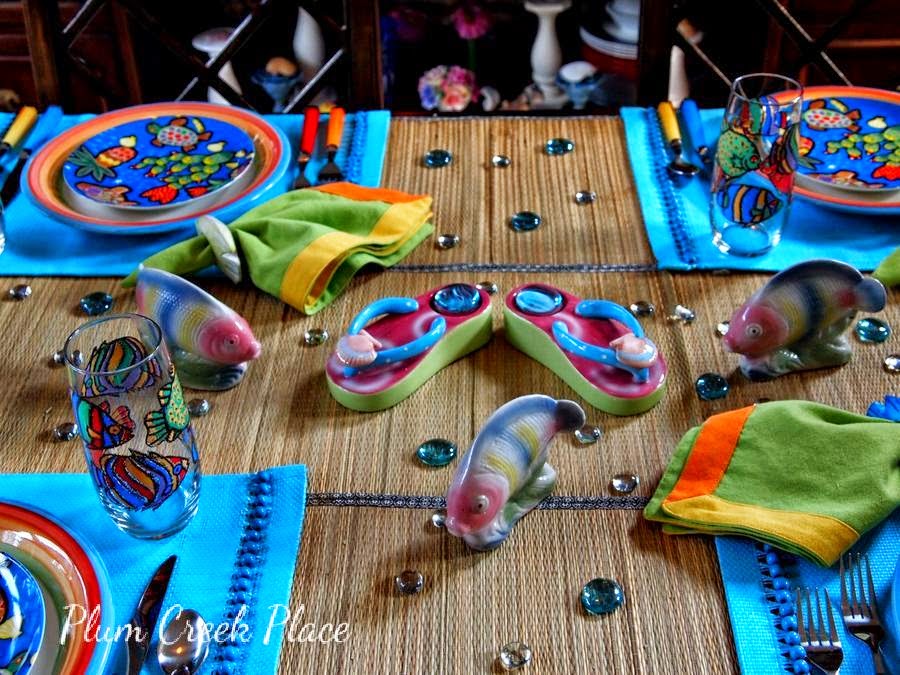 See the three little fishes around the flip-flops below,  they arrived in the mail last week.  My friend JoAnn had found them while she was out thrifting and sent them to me for my tablescape.  Having a tablescape buddy is the best!!!  Don't these cute little blue and pink striped fish look great with the flip-flops? 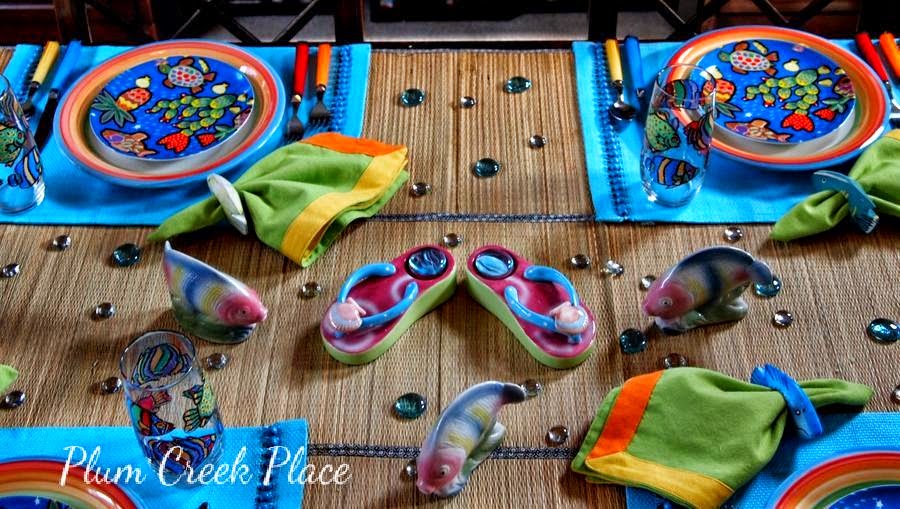 I spent several days arranging and rearranging this table.  I have a definite tendency to overdo when I tablescape. So I started with a lot of things that were removed one item at a time until I was happy with the end result.  In this dry run picture taken the night before the you can see the candle holders that I made from tall champagne glasses,  a little vase filler,  and the lollipop fish suckers. 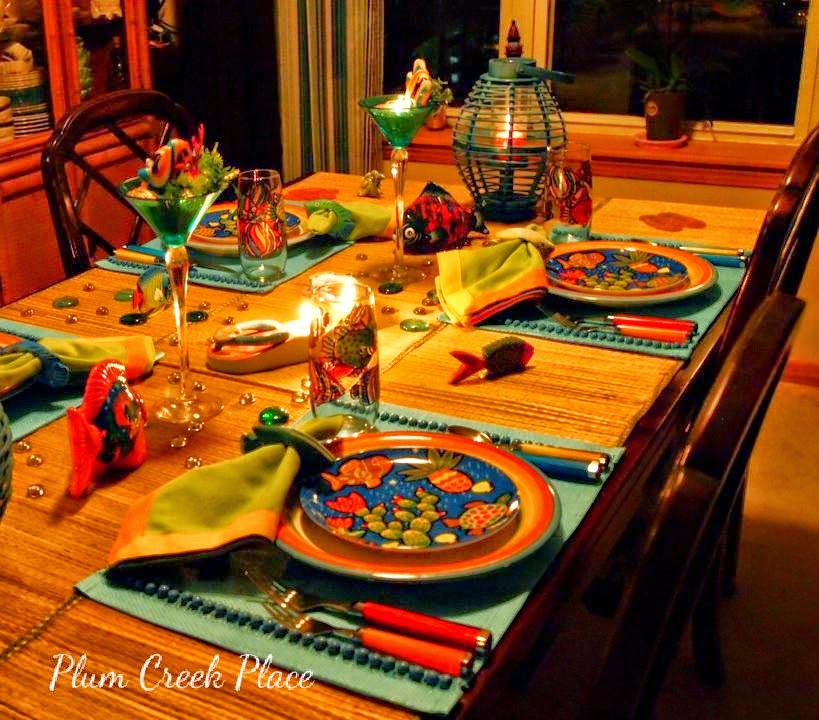 There were light houses and coral posed next to the lanterns. 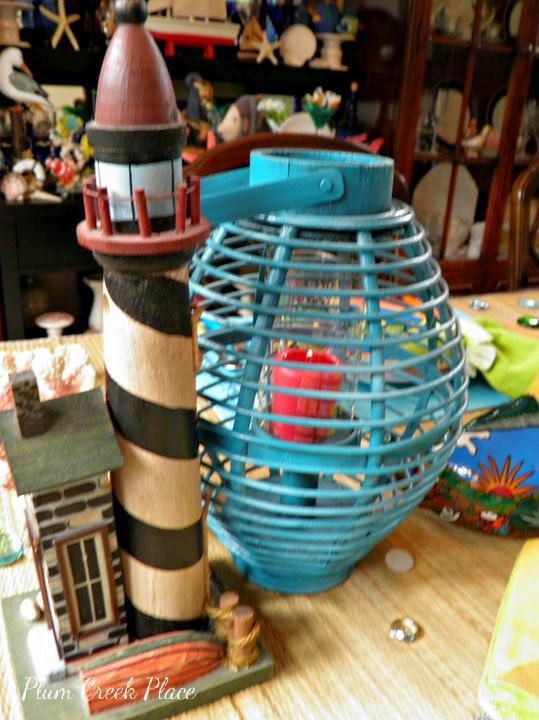 More colorful tropical fish and a lot more scatter had been placed around the table. 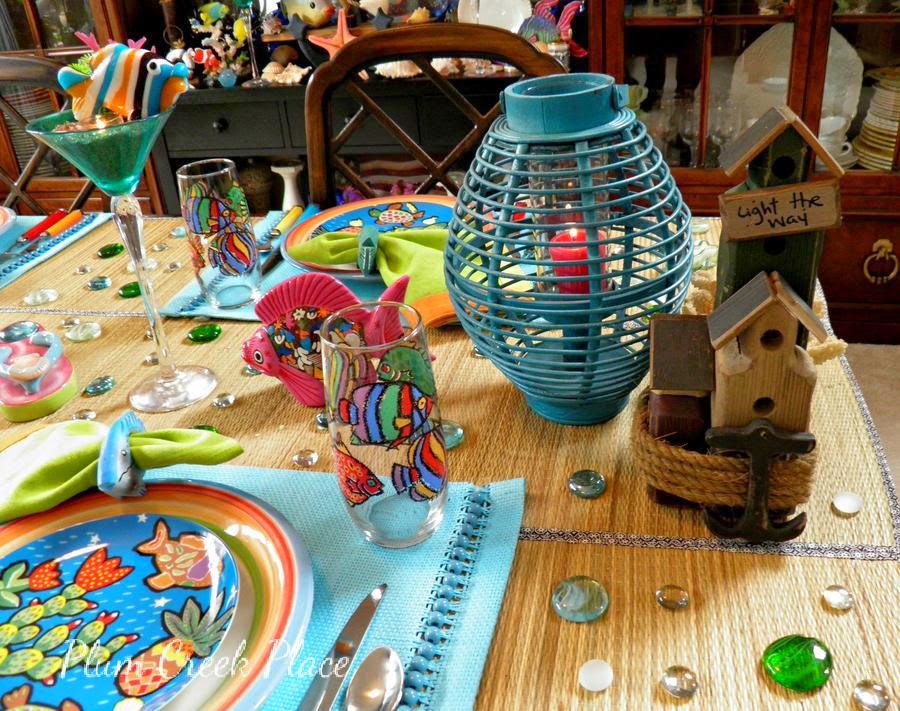 Looks a bit cluttered doesn't it?  I removed and replaced a little at a time. 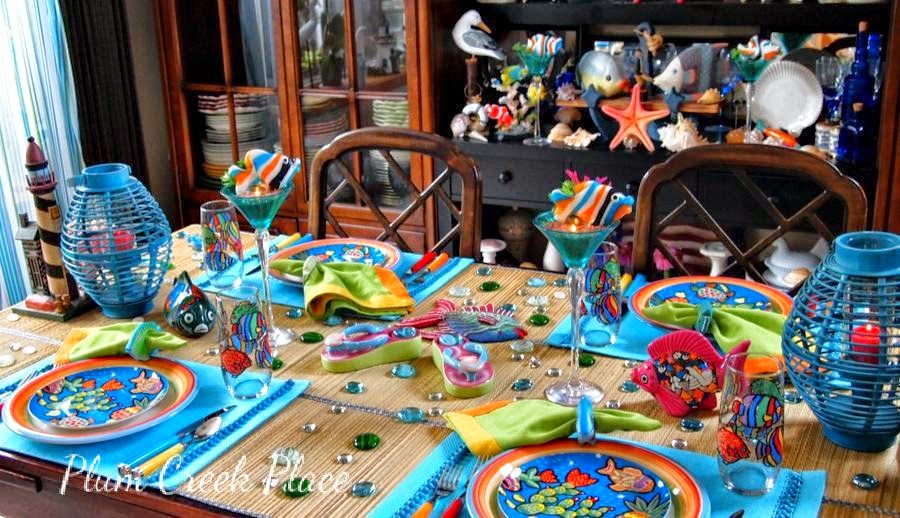 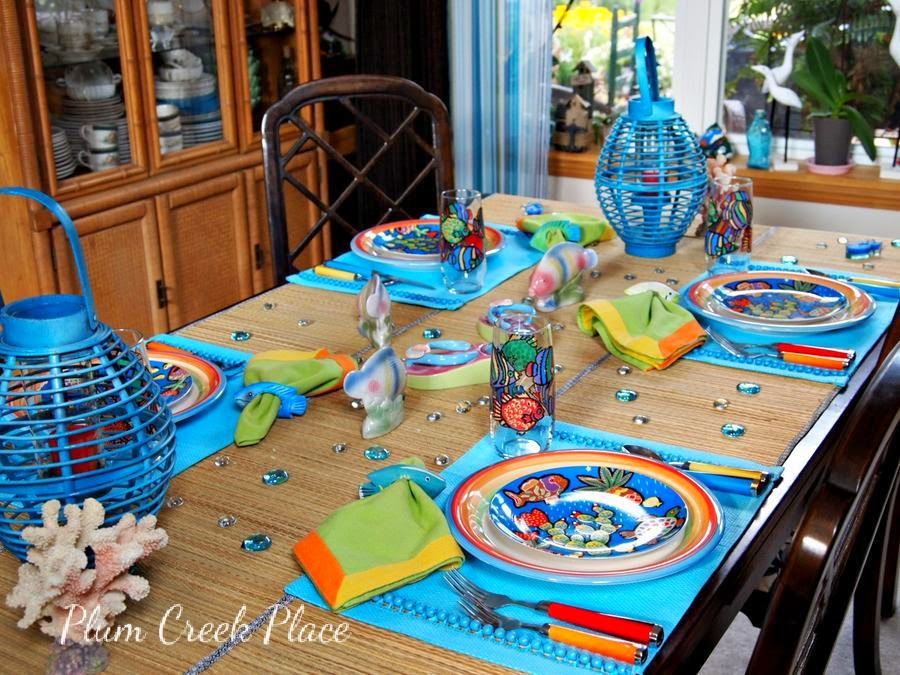 And ended up with a simpler and less cluttered table.

Many of the unused items were placed on the shelves (cluttering them up) with the other beach and nautical stuff that I have collected over the years.

As always - thrift on ladies, thrift on.

These are the parties I like to link to:

Kathe's You're Gonna Love It Tuesday