20 Days Til Christmas - Diary of a Christmas

When the boys were little we had a tradition of the quiet hour before bed.  They would all go up and brush their teeth and put their pajamas on.  When they were ready for bed I would come up and we would all climb on the bed with me sitting in the middle and I would tell them stories and sing lullabies. 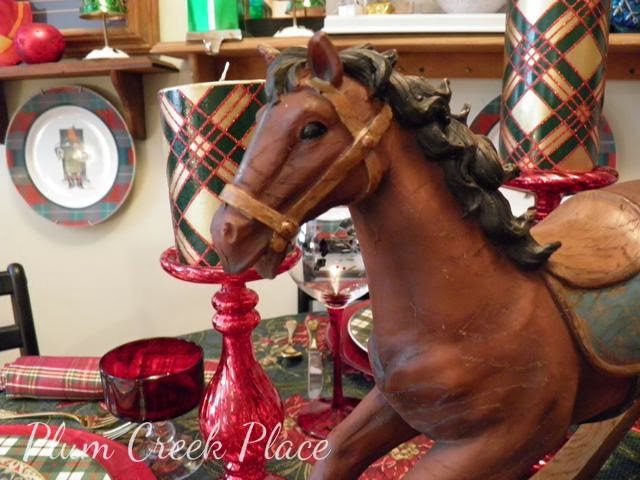 Their favorite story was "The Giant Radish That Ate Cleveland".  This was a story that I had made up with our family as the main characters.  It was about a special "secret" formula fertilizer their father had made that got out of control. A giant radish grew to the size of a house and pulled itself out of the ground, and traveled about making the sound of  "gobbely goop" as it ate everything in site.  The end of the story was when Daddy flew a helicopter over the giant radish just before it was about to eat our house and killed it with another secret formula radish killer. 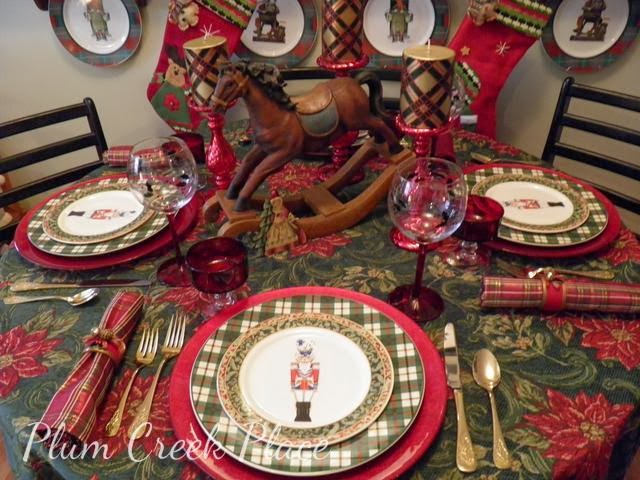 My favorite lullaby to sing was "Toyland". I don't remember when I first started singing this song, , but I just loved it.  The boys would all snuggle up close and close their eyes as they started to drift off. I would tuck them all into their beds and close their doors as they went off to dream land. 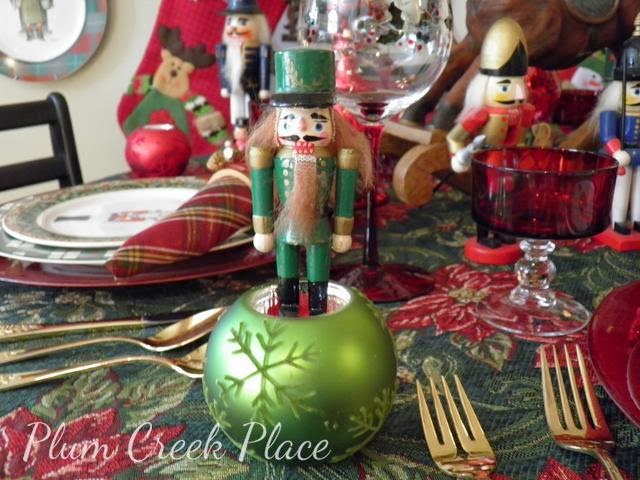 While you dwell within it
You are ever happy there 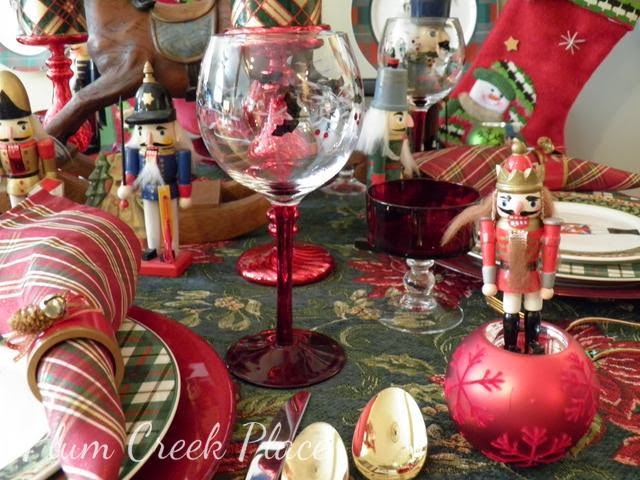 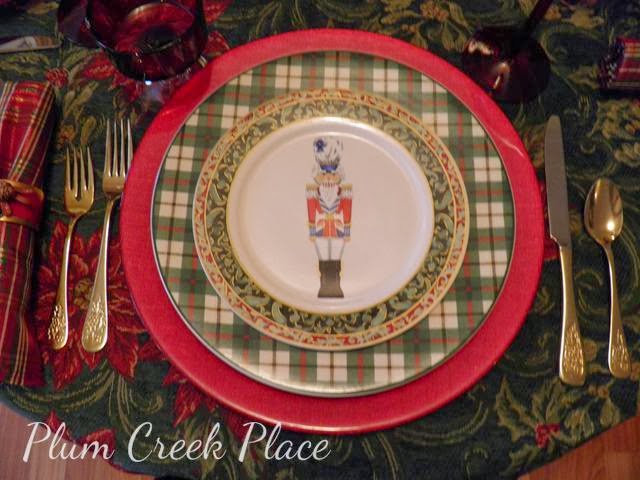 Once you pass it's borders
You can ne'er return again 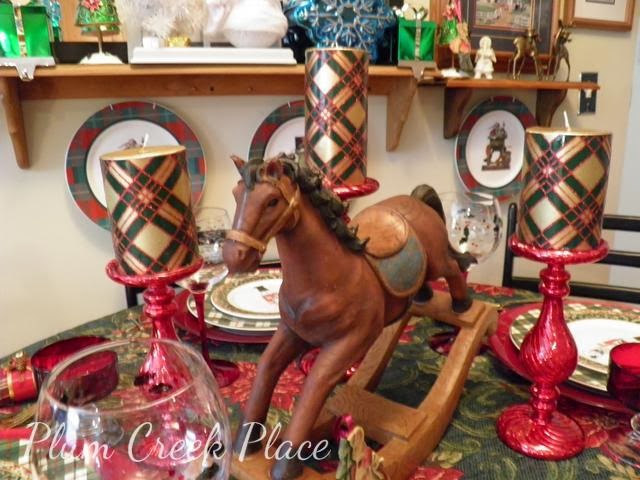 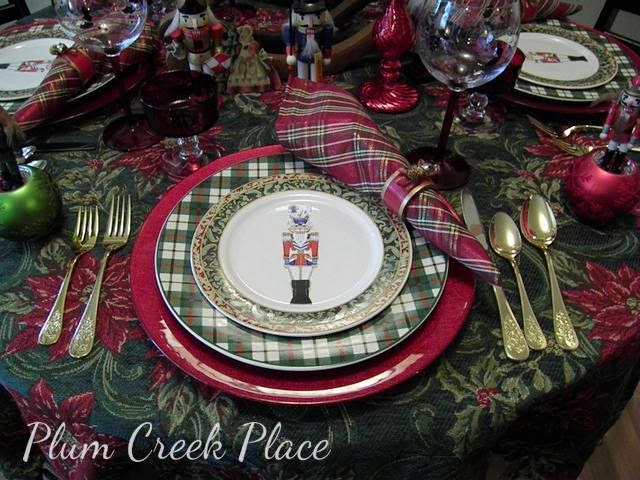 Once you pass it's borders
You can ne'er return again

The one part of my life I wish I could have back is the time of joy at seeing all of my little as they traveled through toyland. 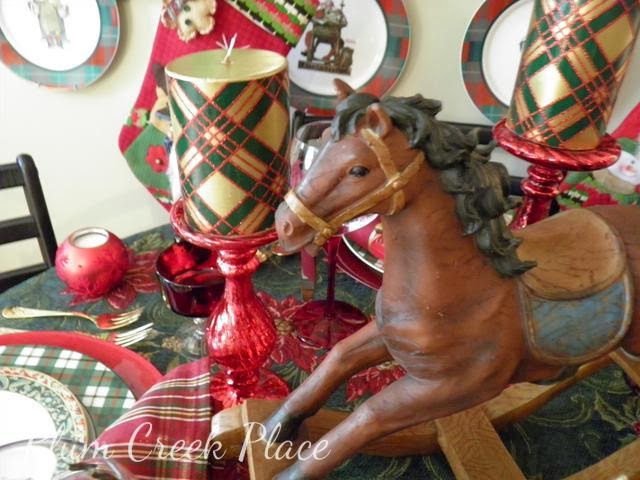 Story of the table - choices.
I wanted nutcrackers on this table and started out with them - but I redid the pictures without the nutcrackers.

I also had a hard time choosing the plaid dinner plates.  I'll show you the pictures I took of the candidates.
The first paid pattern just says Paristone USA 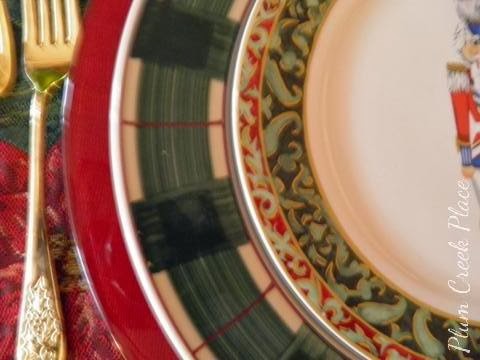 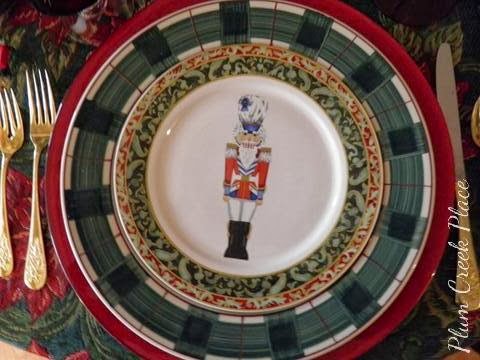 The second plaid just says Home on the back. 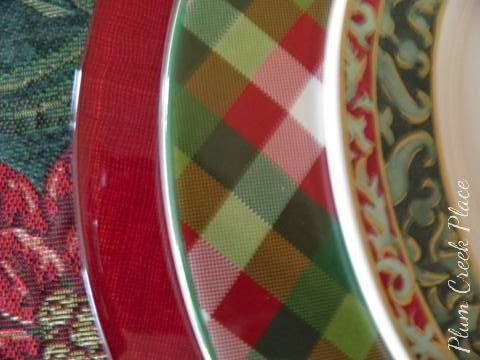 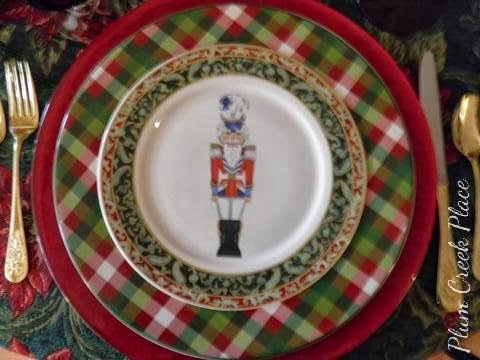 The third plaid is from the Saturday Evening Post Norman Rockwell series. 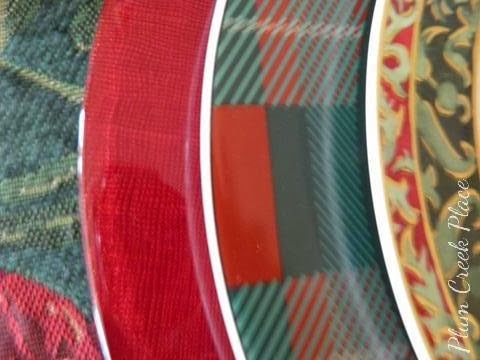 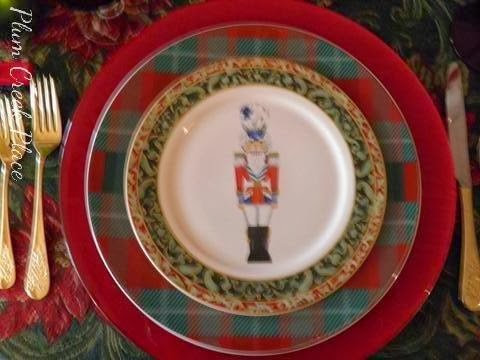 The forth plaid is last years Pottery Barn plaid 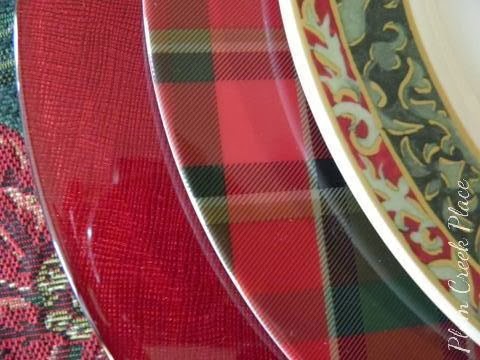 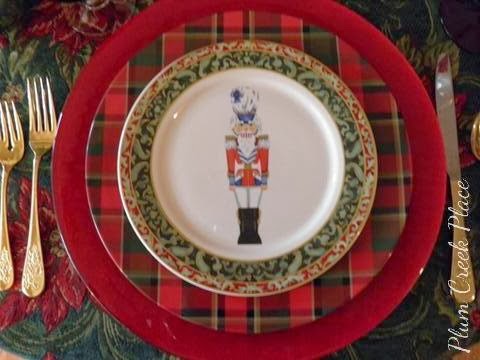 The fifth plaid also says just Home on the back 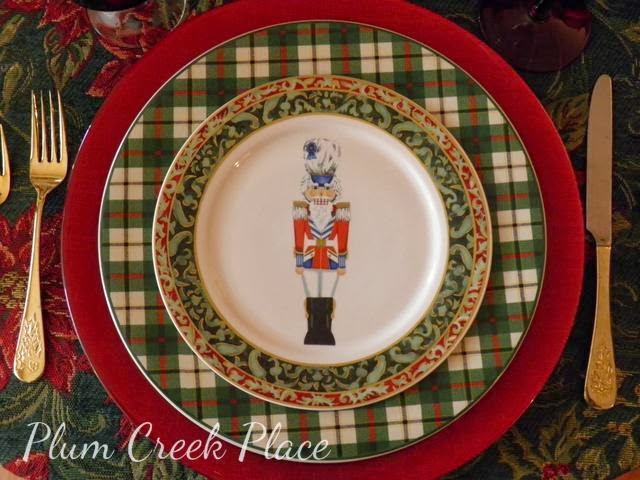 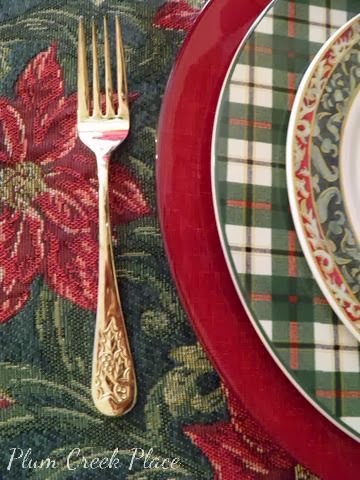 I chose the last selection.  I liked that there was more green in the pattern and I thought it went better with the American Atelier Nutcracker salad plates.

The throw, flatware, wineglasses, napkins, napkin rings, and candles are a Goodwill purchases. 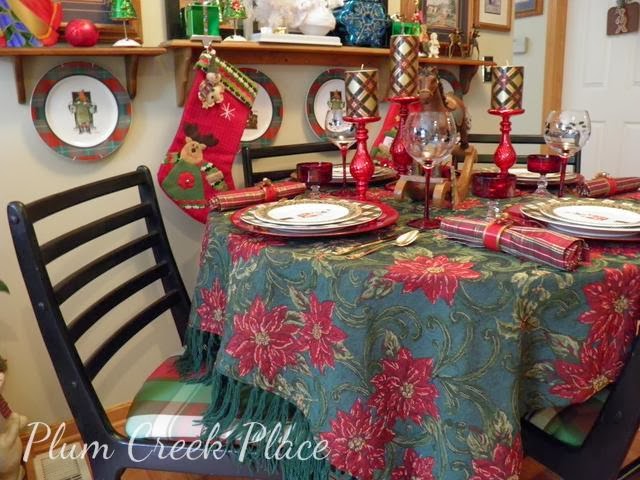 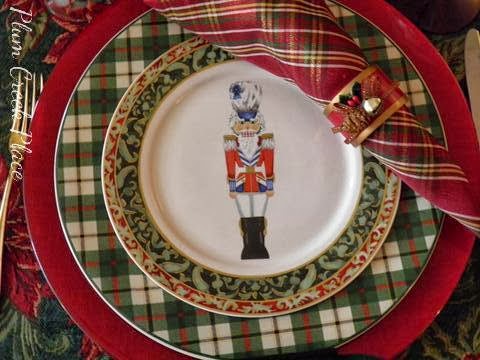 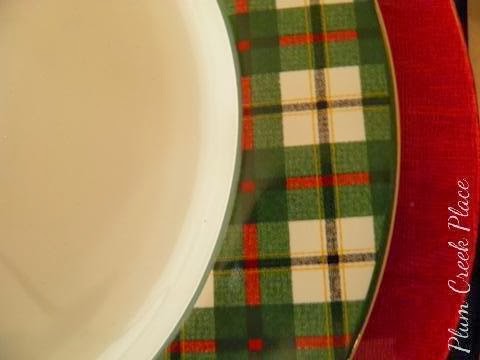 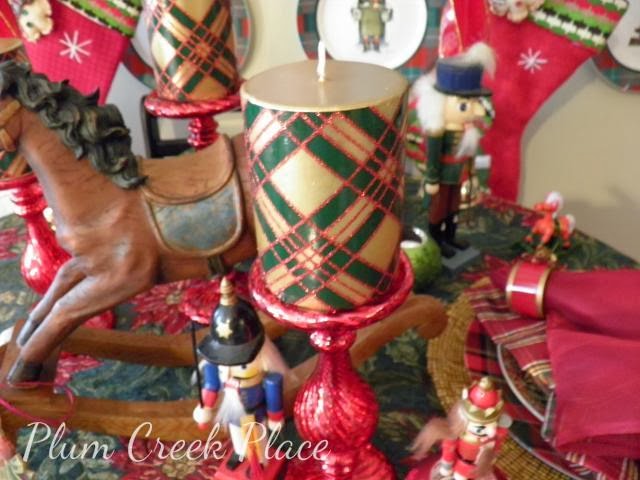 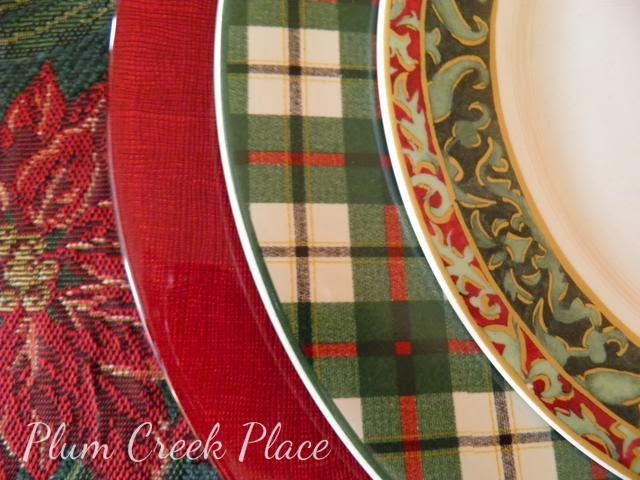 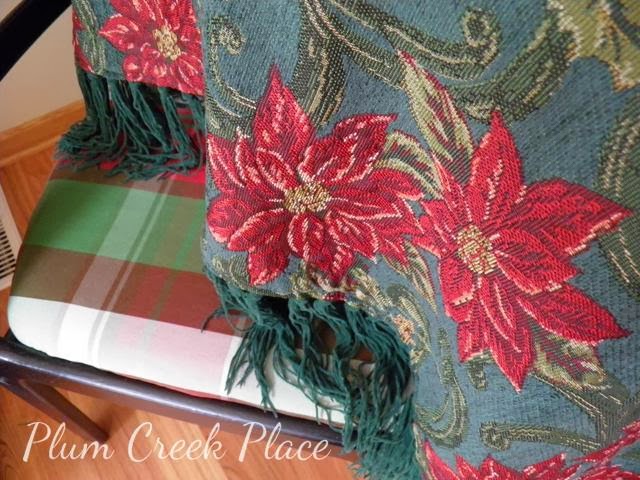 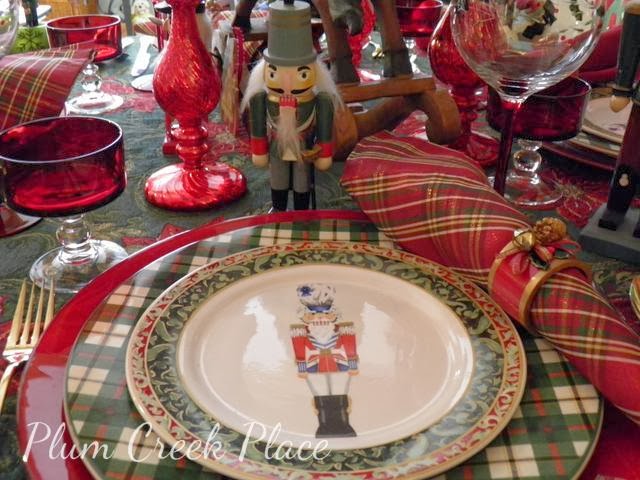 All of the plaid plates (except the Pottery Barn plates) came from either Goodwill, Salvation Army, or The Volunteers of America.
The rocking horse and red mercury glass candle holders came from Marc's (my favorite closeout store).
The Lenox napkin rings are thrift store buys also.

Have a great week, and remember - Thrift on ladies, thrift on!